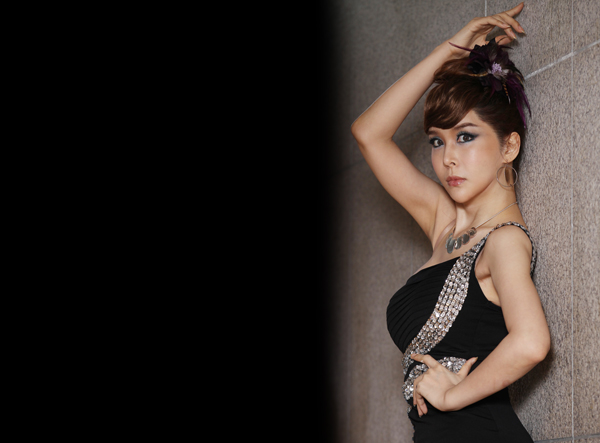 Harisu, 38, hopes that her musical “Drag Queen” will give hope to sexual minorities. It tells of four transsexuals who perform at nightclubs. By Yang Gwang-sam

Harisu made a shocking debut in 2001. When the beauty with a voluptuous body revealed her Adam’s apple in a TV commercial, the term “transgender” was brought to the forefront in Korea for the first time.

And unlike other sexual minorities, Harisu has been catapulted to stardom suited to her stage name, which originates from the term “hot issue.”

Since then, she had enjoyed huge popularity as a singer, actress and entertainer on TV shows and has often been described as “more beautiful than women.” She left the spotlight in 2007 after marrying celebrity Mickey Jung but recently returned in the musical “Drag Queen” in which she plays a show girl.

Ilgan Sports, the sports and entertainment news affiliate of the Korea JoongAng Daily, sat down with Harisu to discuss her musical and other plans.

Q. What did you do before you made your unusual debut in Korea?

A. I shot movies and released albums in China, Japan and Malaysia. I avoided working in Korea because I couldn’t stand the prejudice. I have been treated unfairly here, but I felt more comfortable in other countries. So I focused on working abroad.

What made you decide to return home?

Two of my closest transgender friends took their own lives. I knew one of them for 15 years and the other for 12. They always stood by me and rooted for me. So I thought maybe I could give hope to people like me. There must be some people who gain hope from my presence, even though others denounce me. That idea pushed me back to the stage in Korea.

You seem to have gone through hard times in Korea.

My heart has been broken by other transgenders who hate me for bringing the issue out of the shadows. Now I understand that they wanted to hide from the world. Back then, I felt skeptical about my job. I even considered retiring. But I was able to persevere thanks to people who supported and encouraged me. I now receive a lot of support from other transgenders. They think I contributed to the passage of the new law that allows gender changes on official certificates.

Despite all the pain you have endured, what makes you advocate on behalf of sexual minorities?

Just like other minorities, I was extremely distressed, so I know how much they are struggling. Many people are prejudiced against us. I want to break their distorted view. I’m always ready to take the lead if I can make a difference.

What is the message of your musical “Drag Queen”?

It shows the lives of sexual minorities just the way it is. Indeed, lots of male-to-female transsexuals perform at nightclubs in Itaewon. Some of them live as men by day and women by night and finance sex reassignment surgery with the money they earn. The story reveals how they live while frequently being hurt by people - even their families. I can relate to that story, too. But compared to my friends, who always face prejudice, I grew up with less pain because my mother embraced and supported me.

Are there other actors in the musical who are sexual minorities?

Only me and Cha Soo-bin. Everyone else is heterosexual, so I have given them advice on how to act like transgenders in subtle ways.

Are you still planning to open an orphanage?

I bought land in Gyeonggi several years ago in hopes of opening an orphanage some day. But there needs to be four certified social workers. My husband and I received the certification after studying at university, but we have not yet found two people to join us.

How did you come up with the plan?

I started volunteering in 2003 as an advocate for the physically challenged. Meanwhile, my husband and I constantly hear news about harassment cases in orphanages and parents abandoning their kids. Every time I hear the news, I feel stunned and infuriated. People like me want to conceive a child but can’t, and there are people out there abandoning their kids. I want to give comfort to those abandoned children.

You openly said you would adopt a child. When will you do it?

It was planned early this year, but my father-in-law passed away in March. I’m excited to make the final move.

It’s been six years since you married. It seems like you and your husband are still in love?

I frequently kiss him and say I love him, but of course, we sometimes get in arguments.

Recently, we fought over our eight dogs. Each of us has our own area where we pick up after them, but my husband didn’t take care of his space in time. So I nagged him about it. [Laughs]