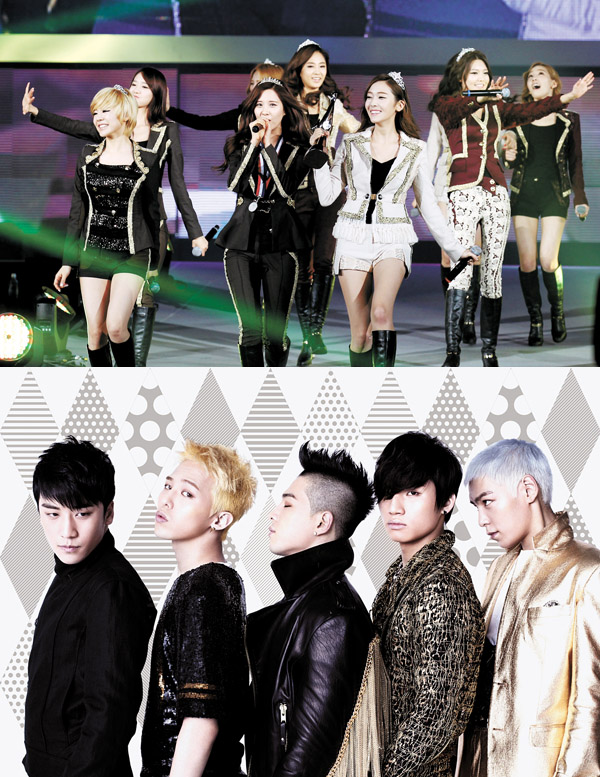 As evidenced by Psy’s meteoric rise via YouTube, online social networks are growing more important for the K-pop industry. The nation’s two major entertainment agencies - SM Entertainment and YG Entertainment - have jumped on the chance to communicate with fans via Facebook, Twitter and other platforms.

SM and YG have taken distinct approaches to social media, and the JoongAng Ilbo analyzed their efforts with the help of social music service Muzalive’s self-developed analysis tool (www.theboda.net). To draw a comparison, YG Entertainment’s Psy and Big Bang and SM Entertainment’s Girls’ Generation and Super Junior were selected for the project.

On Facebook, YG Entertainment was the clear winner. Posts about Big Bang spread most widely among the site’s users, followed by Psy and Super Junior. To the contrary, posts about Girls Generation were shared the least.

More specifically, Psy posts were shared an average of 7,000 times per week while those about Girls’ Generation were reposted only 496 times on average. Big Bang and Psy had the most active fans who either shared or “liked” posts more than once a week.

But these statistics don’t offer the whole picture.

“K-pop artists have many fans in the global market, but they tend to be less active online. It is K-pop stars’ homework to figure out how to raise the rate,” said Lee Seong-kyu, head of Muzalive.

Even star of the moment Psy suffers from the problem. The analysis found that 80 percent of the rapper’s active fans shared or liked posts about him only once a week, on average.

A geographic distribution of Facebook fans showed that Psy and Girls’ Generation were most popular in English-speaking countries, while most of Big Bang’s active fans were in Japan.

Hits on the K-pop groups’ Wikipedia pages showed similar results. However, when Psy released his new single “Gentleman,” visits to his Spanish-language Wikipedia page surpassed those to the English-language page.

“After an analysis of the number of Wikipedia page hits, we determined that the number of hits is closely correlated to digital album sales. As such, Psy and Girls’ Generation rank high on the Billboard charts,” Lee said.

Both SM and YG have been pushing ahead with social media strategies but in different ways.

SM Entertainment established an integrated channel called “SM Town” to group its artists together. The agency uploads important news about artists - such as when they top Billboard charts - on the SM Town channel, while less important information goes through artists’ individual channels.

On the other hand, YG Entertainment makes full use of each artist’s channel. For example, Psy uploads news about upcoming concerts on YouTube. The agency’s integrated channel YG Family only acts as a hub to connect the agency’s artists.

Regardless, SM officials insist that they’re making full use of social network data.

“We are trying to actively use SNS data in our promotions and are especially focused on Facebook and YouTube. The reason why we decided to organize a tour around South America for Super Junior is because we saw a hike in social network usage in the area,” said Yoo Eun-bi, an official from the artists strategy and communications department at SM Entertainment.