Federer cruises into third round at French Open

Federer cruises into third round at French Open 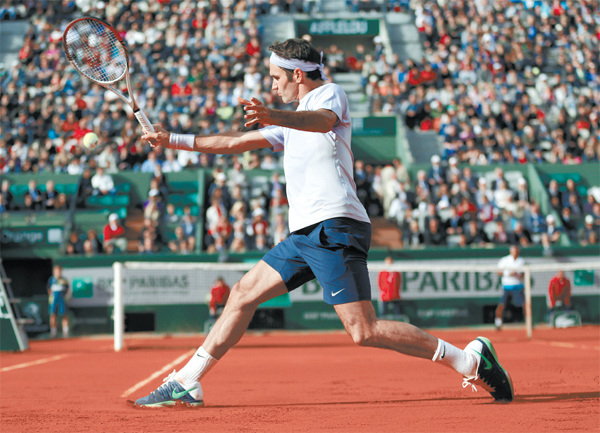 PARIS - Now things could get a little more interesting for Roger Federer.

After a pair of straightforward and straight-set victories at the French Open against qualifiers ranked outside the top 150, the 17-time major champion will face a seeded player, France’s Julien Benneteau, who not only already beat Federer once this year but also came within two points of upsetting him at Wimbledon, of all places, in 2012.

“I think I’m playing OK,” Federer said in something of an understatement, considering he’s dropped 11 games through six sets so far. “Definitely think the next match is going to be sort of the big test for me, to see exactly where I stand.”

There wasn’t much trouble for Federer in the second round Wednesday, when he beat India’s Somdev Devvarman, 6-2, 6-1, 6-1, in less than an hour.

It really was something of a laugh, especially with Federer serving at 4-0 in the final set. He hit a first serve well out, and both players waited for the linesman to make a call - which he finally did, albeit after a long delay. Federer and Devvarman chuckled, looked at each other, and chuckled some more. As Federer prepared to hit his second serve, he needed to pause because he couldn’t regain his composure.

“You obviously know he’s capable of doing certain things, and you try and make life as tough for him as possible,” Devvarman said. “In my case today, I didn’t execute. And sometimes even when I did, I feel like he came up with the better shot.”

Federer accumulated a 54-12 edge in winners, in part by moving forward to the net on 30 points.

“I’m happy that I was playing offensive and aggressive tennis in the first two matches, because I had the opportunity, but I didn’t back off and start to play passive tennis and wait for mistakes. So I took it to my opponent,” said Federer, the 2009 French Open champion. “But really, I think I’ll only know more after the Benneteau match, to be quite honest.”

Then again, Benneteau might not quite be the same guy who took the first two sets against Federer before losing in five on the grass of the All England Club nearly a year ago. Or the one who has beaten Federer twice in six meetings, including 6-3, 7-5, in February on an indoor hard court at Rotterdam, the Netherlands.

Even putting that aside, Benneteau explained, “Obviously it’s all pretty tricky, [playing] Federer. He breezed through the first two rounds. He plays very well. .?.?. You know you’re going to have to really ramp up a gear.”

The same must be said when facing another past French Open champion, Serena Williams, who has been challenged about as much as Federer has.

Williams extended her career-high winning streak to 26 matches by defeating French wild-card entry Caroline Garcia, 6-1, 6-2 Wednesday. A year after the only first-round Grand Slam exit of her career came in Paris, the American has lost four games in two matches.

Other women’s winners included two-time Australian Open champion Victoria Azarenka and 2011 Wimbledon winner Petra Kvitova - who both finally got to play their rain-postponed first-round matches - along with 2008 French Open champion Ana Ivanovic and 2012 runner-up Sara Errani, who reached the third round.