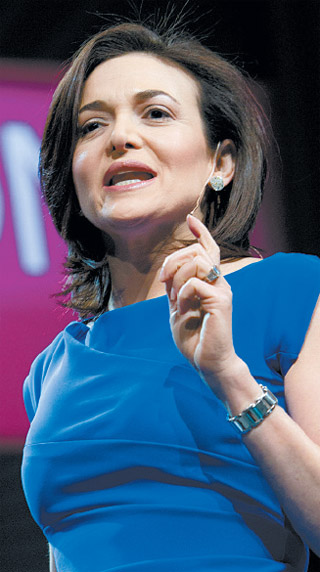 Facebook, owner of the world’s most popular social network, is facing increased competition for younger users from services run by Twitter and Tumblr, according to Chief Operating Officer Sheryl Sandberg.

While more teens are turning to rival social networks, Facebook usage is still growing among that demographic, Sandberg said today in an onstage interview at the D: All Things Digital conference in Rancho Palos Verdes, California.

“Teenagers are using other things more,” Sandberg said. “At the same time, they continue to be very active, engaged Facebook users.”

Attracting and keeping young members is a crucial part of Facebook’s efforts to bolster advertising revenue and find ways to profit from the growing portion of its more than 1 billion users who access the service on mobile devices.

While about 94 percent of teen social-media users had Facebook profiles last year, their ranks on Twitter more than doubled to 26 percent from 2011, according to a report from the Pew Research Center.

“We are the leaders in a growing market,” Sandberg said. “Do I think there’s time and room for people to do a lot more sharing before we reach the zero sum game? Yes.”

Facebook shares have dropped 39 percent since an initial public offering last May, leaving Facebook with a market value of about $56.3 billion.

Facebook, based in Menlo Park, California, is concentrating on new products to get users to spend more time on its mobile site. Last month, the company introduced Home, software that integrates features more deeply into some smartphones using Google’s Android operating system.

The company has also considered buying Waze, a mobile software provider of mapping products, people familiar with the matter said earlier this month. The price could be as much as $1 billion, the people said.

Facebook’s first-quarter sales expanded 38 percent to $1.46 billion, the company said on May 1. Still, that was a slowdown from the 40 percent growth rate in the fourth quarter.

Mobile made up about 30 percent of advertising revenue in the first quarter, expanding from 23 percent in the previous period.

“The growth you’re going to see for us on mobile is not necessarily inserting more ads in, but improving the quality,” Sandberg said.

Separately, the company yesterday said it is rolling out a service that verifies pages for high-profile users, borrowing a feature that Twitter helped make popular. The tool is designed to help members find the authentic accounts of celebrities and other well-known people and businesses on Facebook, the company said. Verified pages will have a small blue check mark to indicate authentication.