For 1 Korean adoptee, it was happy never after

For 1 Korean adoptee, it was happy never after 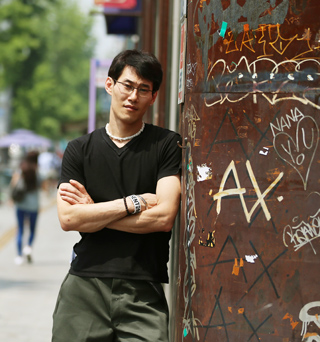 Han Ho-gyu was adopted by an American family at the age of 7 and that was the start of a highly unlucky life. An adoption agency registered him as an orphan even though he was a missing child. By Choi Seung-sik

For many Koreans born in the poverty that followed the 1950-53 Korean War, being adopted by American families was the best thing that could have possibly happened to them.

For Han Ho-gyu, 42, it was just one of the many unlucky turns that make up a life full of woe.

The rough outline of Han’s story goes like this: Born in Korea in 1970 when poverty was still rampant, Han landed in the United States as an adoptee at the age of 7. He lived there 30 years and served in the U.S. military in Iraq.

But little about his life in the U.S. was good, and it ended even worse. He was deported back to Korea in 2009 and now works in a restaurant in Itaewon, central Seoul.

“The tragedy of my life all started with my adoption,” Han says.

In 1977, he and his parents visited Seoul to see his grandmother in the capital city. Excited with curiosity, Han wandered away from his grandmother’s house and got lost.

A U.S. soldier took him to a police station and then the police sent Han to an infant welfare center in October 1977.

The welfare center asked an adoption agency to register Han as an orphan. The agency added him to a list of kids waiting to be adopted.

In the 1970s, when Korea was still struggling to break out of abject poverty, such mishaps weren’t that unusual. Adoption agencies, desperate for fees they earned by finding kids homes, weren’t too strict about the kids they placed abroad.

Or the American families they placed them with and Han got a bad one. His family in Texas was negligent and his adopted father violent.

“He sometimes threatened me, saying, ‘I’ll kill you if you talk to the police,’?” Han says.

Han’s adopted family didn’t even follow through on the procedures to get him American citizenship, and then the mother and father divorced.

He was shunted from one welfare center to another. Getting a job without citizenship or a green card wasn’t possible, but it was possible to join the U.S. Army. Han took that step. “At the time, I had nothing else I could do.” In fact, he thought of joining the Korean military but was too old.

“Having lived through such hard times in the U.S., I wanted go to where I was born,” he says.

He would get that ambition in 2009 - but not in the way that he wanted.

After three years in the U.S. military, Han worked as a truck driver in Texas.

In 2001, a friend asked him to deliver a box of goods. He was stopped by a cop on a highway and the box turned out to contain drugs, according to Han.

“I tried to explain things but failed to clear my name,” he said.

After serving time in jail, Han was obliged to report his whereabouts every six months to the local police. He complied for three years but failed to report in August 2008. His life in the U.S. ended. He was deported to the land of his birth.

Korea was like nothing he remembered from his boyhood in the 1970s. What’s worse, he couldn’t speak Korean and didn’t have any friends to help him.

Four years into living in Korea, Han works at a restaurant in Itaewon.

“I don’t usually get out of the Itaewon area because my Korean is still bad,” he says.

Luckily, Itaewon is an expat-friendly neighborhood, so Han can live as a permanent stranger in his own homeland.

To avert such tragedies in the future, Korea joined the Hague Convention on Intercountry Adoption this month, an international agreement on best adoption procedures. A total of 91 countries, including Korea, have signed the treaty.