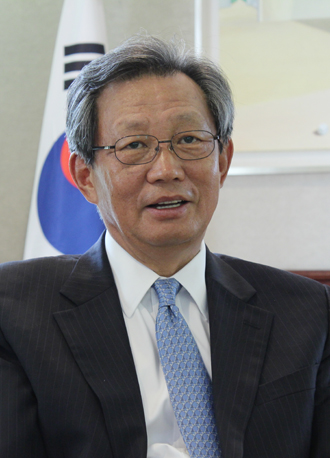 WASHINGTON - After serving as a diplomat for 41 years, Choi Young-jin, former Korean ambassador to the United States, has a profound understanding of the complications of diplomacy.

The 65-year-old public servant officially withdrew from his public career Tuesday and is set to begin another phase of his life. The JoongAng Ilbo met up with Choi to hear his thoughts on diplomatic relations with Korea’s top ally and China and the latest sex scandal involving the spokesman for President Park Geun-hye during her state visit.

Q. What do you make of the U.S. strategy and foreign policy with Korea and China?

A. I think the U.S. foreign policy is rational. Many Koreans seem to have some doubts and disapproving feelings toward the U.S. policy, thinking the big power has an ulterior motive. But, as I engaged with the U.S. while serving as Korean ambassador, I felt that Washington’s foreign policy with China, North and South Korea goes hand in hand with common sense and standard procedure.

Is there any particular point that you try to be more careful when meeting U.S. diplomats and other opinion leaders?

Many Americans put first the national interest when talking about policies or initiatives. They think whether they are in the best interest of the United States. But they are less familiar with the “public sentiment” factor. If I say the government is hesitant to adopt a certain policy due to disapproving public sentiment, the U.S. people are less likely to understand. They would misunderstand that Korea’s leadership is under the public’s thumb.

How did the U.S. evaluate Park Geun-hye’s visit?

Many here call U.S. President Barack Obama “a charmer,” and I heard Americans use the same expression to describe Park. The two leaders took a walk after the summit. It seemed that they’ve become really close.

Is there any disagreement on the Atomic Energy Agreement?

The two-year extension was inevitable. We have a conflicting interest with the U.S. but will work to iron things out. The approach Korea aims to take is not “all or nothing” but seeking a mutual interest gradually.

Let’s talk about the latest scandal. When did you know what was going on?

I was on an airplane to Los Angeles when I got the call from the U.S. State Department.

Did you have an emergency meeting on the flight?

Yes, but there wasn’t much to be discussed because little was known about the woman. We had no idea what is fact and what is rumor so we couldn’t report to the president right away.

What’s your most rewarding experience during your years as an ambassador?

When Park Geun-hye was allowed to speak at Congress. From the beginning, many people said it would be hard. But we kept sending messages and campaigned for it.

Can you give any advice to aspiring diplomats?

Winston Churchill once said “Never, never, never give up.”