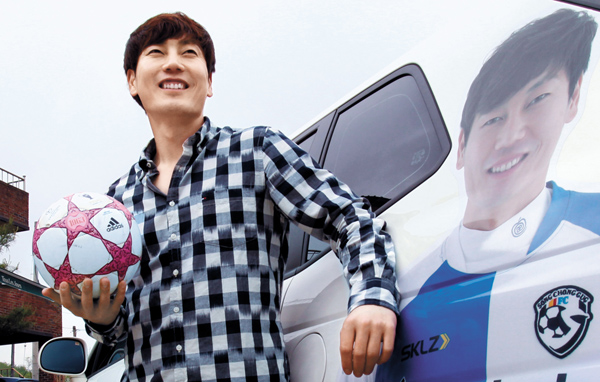 Song Chong-gug, the former all-around soccer player, continues playing multifaceted roles in his life after retiring as a professional footballer.

“People in the soccer field call me ‘commentator Song’ but mothers of my students call me, ‘CEO Song’ and other people just call me ‘Jia’s dad,’ ” Song told a JoongAng Ilbo reporter.

Indeed, Song, 34, was considered one of the most versatile “multiplayers,” a midfielder skilled at switching from offense to defense. In the 2002 World Cup, dubbed as the “Crown Prince of Hiddink’s Squad,” he played a leading part in driving the Korean team to the semifinal round.

He was one of two Korean athletes who played every minute of all seven World Cup matches. His legendary performance of marking Luis Figo out of Korea’s group match against Portugal is still remembered and talked about by soccer fans.

But in March 2012, Song shocked his fans by announcing his sudden retirement from pro soccer.

“During my school days, I was so poor that I had to wear a soccer shoe I picked from the trash because I couldn’t afford to buy one,” he said. “And mother supported me by cleaning my school team’s dormitory. My mother was the only reason on the earth that I lived.

“But my mother passed away last year and I was not able to be around her at the time because of my overseas schedule. I felt like I couldn’t play soccer anymore.”

After retiring, Song spent days in deep sorrow, stuck in his room for a while. Then, he was offered to take part in a broadcast dancing contest “Dancing with the Stars Korea” last May. 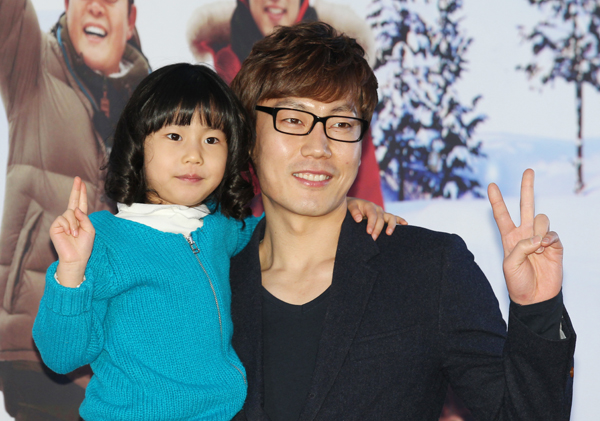 He said, “I took the plunge to take it because I thought I had to stop living like that.” He reached the top five on the TV show and it gave a 180-degree turn to his life.

Fully recovered, Song is now as busy as he was in his prime. He is a soccer commentator on MBC broadcasts and the CEO of his soccer academy, the Song Chong-gug FC. He is also appearing with his daughter, Song Jia, on the TV reality show “Daddy, Where Are You Going?” that features trips of five celebrity dads and their young children.

His ability to juggle all his jobs didn’t come out of nowhere. “My coach during college had me play every position except a goalkeeper at a time when soccer players highly skilled in one position were mainly appreciated,” he said. “One day, I told my coach in a sauna that I wanted to train for one position, but only to be reprimanded by him,” he said “After all, his training helped me earn the name of ‘Crown Prince of Hiddink’s Squad.’ ”

After retirement, his new phase of life is going smoothly. His Saturday reality program, “Daddy, Where Are You Going?” has a huge following, offering a healing effect to viewers. During several trips, his head-over-heels love for his daughter has gained him another nickname, “doting dad,” and thanks to this, he shot a washing machine advertisement with his daughter.

Combined with his rich experience as a footballer, his commentary is gaining favorable reviews and his hugely invested soccer academy is thriving.

Far from satisfying his dreams, he has further plans in his mind.

“I’d like to host a TV show like Kang Ho-dong, a wrestler-turned-M.C., someday,” he said, “I also want to broadcast the 2014 World Cup in Brazil with Kim Sung-ju, who is an anchor-turned-entertainer and co-star of the TV program.”

As for his soccer academy, he said he wants to foster players like footballer Son Heung-min by training solid basic skills.

“I also hope to be a director of a professional soccer team in 10 years, and 15 years from then, I dream of spearheading the Korean soccer team in the 2028 World Cup,” he said.