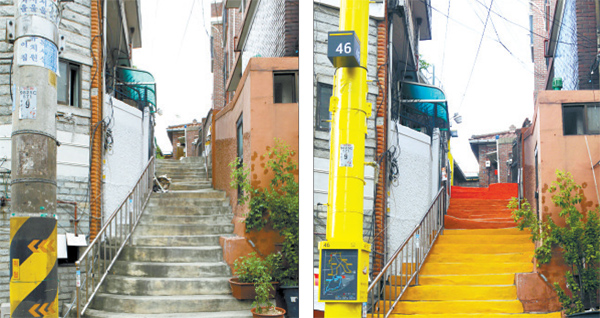 Yeomni-dong before, left, and after it was redesigned. Numbered power poles pinpoint locations in the neighborhood. Provided by Seoul Metropolitan Government

Under a maze of electrical wires strewn across narrow alleys filled with rows of low-rise multi-unit housing and disorganized houses, two old men walk their dogs, exchanging greetings by talking about leaky roofs.

Most of the time, the soon-to-be-demolished neighborhood of Yeomni-dong, Mapo District, central Seoul, is quiet, except for the sound of mothers scolding their children or phone conversations penetrating thin walls. The layout of the neighborhood shows the chaotic nature of the modernization of Seoul.

After Yeomni-dong was designated for redevelopment three years ago, many residents moved, leaving behind empty houses and the neighborhood, once a thriving place where salt merchants used to live together, became a seedy place for the working class and seniors.

“Even an old person like me hardly goes out when it becomes dark,” said an old man who came out of his two-story house to discard trash.

“Since [the neighborhood] is located right next to colleges [in Sinchon, western Seoul], some drunkards chase women here all the way from Ewha Womans University,” added the old man, who wished to remain anonymous. “Just address me as an old man who’s lived here for a long time,” he said with a laugh.

However, a recent design project of the Seoul Metropolitan Government brought some changes to the neighborhood and its residents, at least as far the old man was concerned. 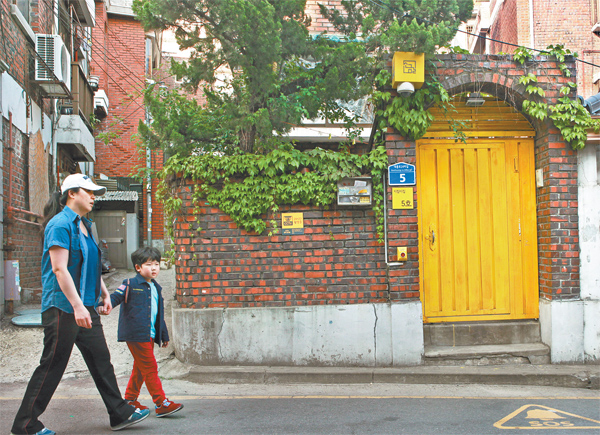 After Yeomni-dong, Mapo District, central Seoul, was designated for redevelopment, it became notorious as a hotbed for violent crimes. So, the Seoul Metropolitan Government redesigned part of the neighborhood in ways to deter potential crime. A walking trail now links crime-ridden alleys with six houses designated as safe keepers, shown in the main picture. By Park Sang-moon

“The other day, there was this woman who was chased by a couple of men. She pushed a button down here and an alarm went off. The sound was so huge, people around this area all opened their windows and looked down. It’s very effective, I think.”

Initiated by a design department of Seoul city, Yeomni-dong was designated as a pilot project of Crime Prevention through Environmental Design (CPTED), which is based on the principle that good design can change society for the better by discouraging potential criminals and preventing undesirable activities. The principle, also known as social design, is still in its infancy but some believe Seoul can be at the forefront of the movement.

To this end, under the CPTED project, Seoul city created a walking trail called Salt Way that stretches about 1.7 kilometers (1 mile) and links crime-ridden areas with bright yellow utility poles numbered from 1 to 60.

“Looking at all the brutal crimes, we thought of our own responsibility and wanted to prevent crimes in advance through design,” said Kang Hyo-jin, the head of design team at Seoul city. “With Yeomni-dong, we tried to increase public eyes by turning these high-crime alleys into a walking course by installing health equipment and giving instructions on how to work out using the geographical features.”

Kang explained that the city numbered the power poles for the convenience of local police and residents.

“As we were working on this project, we realized even the local police have a hard time figuring out the exact location when they receive a call from a resident who is in need of help,” she said. “So we allocated numbers so that people who are in trouble can simply say, ‘I’m around the No. 7 power pole.’ ”

Another feature of the design project is designating six houses along Salt Way as safe keepers. The houses are noticeable from a distance because their doors are painted canary yellow. An emergency button and surveillance camera are installed at each safe keeper’s door. 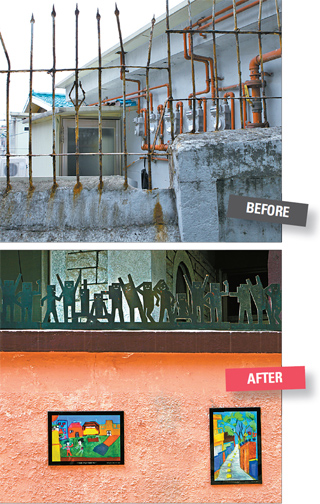 In order to give the impression that someone is taking care of the area, the city replaced rusty barbed-wire fences with zany-looking ones. Provided by Seoul Metropolitan Government (before) and Park Sang-moon (after)

In addition to the walking trail and safe keeper’s houses, residents took part in community art programs by painting their walls and doors in order to give the impression that someone is taking care of the neighborhood. Some rusty barbed-wire fences were also replaced by zany-looking ones.

“We have been taking note of social designs that can provide solutions to issues like crimes and bullying, but the reason we chose crimes first is a recent string of violent crimes that had happened over the past years,” said Kwon Eun-seon, another Seoul city official who is involved in the design project, which cost 180 million won ($171,428).

Last year, Wu Yuanchun, an ethnic Korean-Chinese man, was sentenced to life in prison for raping, murdering and butchering a 28-year-old woman into more than 300 pieces, a crime that shocked the nation. After he was caught, he told the media that nobody would see him dragging the woman into his house in Suwon, Gyeonggi, because the neighborhood was dense and complex.

The woman called the police several times for help when she was left alone in Wu’s house before she was killed, but she couldn’t tell police her location even though she lived in the neighborhood.

About six months after Salt Way was created, the Korean Institute of Criminology polled 372 Yeomni-dong residents and found that feelings of insecurity had decreased by 9.1 percent.

During a recent visit to Yeomni-dong, this reporter talked to about a dozen residents. Some liked the changes, while others were skeptical. Some were not even aware of Salt Way. 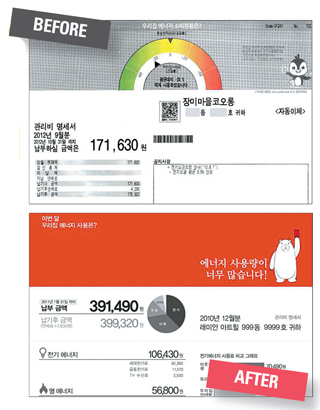 Redesigning apartment utility bills is an example of social design. Utility bills filled with tiny, meaningless numbers are replaced with color-coded bills that inform consumers about their energy consumption levels. Red bills are issued to those who use a high amount of energy; yellow bills go to those with an average amount; and green bills for those with low energy expenditure.Provided by Korea Institute of Design Promotion

“It feels less creepy, but I highly doubt its effectiveness. Since the city made the walking trail at unfrequented alleys, who would dare to go there and work out?” said Yun Hyun-sun, a 38-year-old female resident.

“I feel more relieved than before, but all the alleys are still dark at night. That’s why I still have the fear of crime.”

More than just a paint job

However, Seoul city officials want to achieve more than painting and installing emergency buttons in Yeomni-dong.

“Our final goal is activating the local community by turning one of its empty facilities into a community center so that residents get to know each other by doing cultural activities,” said Kwon. “When the local community is tightened and activated, it deters potential criminals from lurking around the area.”

The city’s CPTED project will be expanded this year. The city has chosen four neighborhoods, including Yongsan-dong 2 ga, often dubbed Haebangchon, for future design projects.

Seoul city is also using social design to try to reduce bullying. Several victims of school bullying recently committed suicide and many of them wrote in their suicide notes that the schools should watch over some areas that are not covered by surveillance cameras, where bullying often takes place.

Social design is also tackling the issue of bullying. Seoul city turned a vacant space with no surveillance cameras into a space where students can exercise and enjoy cultural activities, which decreases the possibility of bullying. Provided by Seoul Metropolitan Government

Responding to these concerns, Seoul city selected Kongjin Middle School in Gayang-dong, Gangseo District, western Seoul, because its well-being index was the lowest in the capital city.

Under the city’s design project, vacant spaces were turned into places where students could get involved in cultural activities.

For example, artificial climbing walls were added in one place and boxing balloons were installed at another place. By doing so, the city encouraged students to interact with each other, which decreases the chance of bullying.

Experts say painting a wrecked concrete wall with bright colors or turning deserted spaces into something useful can be effective.

“By tidying up the neighborhood, you can show the potential criminals that this town doesn’t allow any disorder,” said Lee Yung-hyeock, a professor of police science at Konkuk University. “If the town is littered and covered with graffiti, such an environment empowers criminals, rather than an organized setting.”

In 2010, Seoul city began recommending that newly built apartment complexes adopt CPTED principles. Other metropolitan areas, including Incheon and Busan, are accelerating efforts to prevent crimes through the use of social design.

Designers and government officials hope to tackle other issues with design.

Industry people who are interested in social design also launched a workshop called Design Dive 2020 two years ago. About 60 people discussed diverse social issues, such as how to discard food waste in pleasant ways and find solutions for many social issues. Design Dive 2020 is working on redesigning a citizen complaint department under the Ministry of Security and Public Administration.

“All the public service centers [complaint departments] are designed not for users but for service providers. So we’ve been discussing ways to redesign the public service center for the convenience of users,” said Yun Seong-won, the team leader at the service design department of the Korea Institute of Design Promotion. The institute is also involved in Design Dive 2020.

According to Yun, the final design was unveiled on Saturday and some of its ideas will be applied to public service centers of the ministry.

?Many designers, whether they’re Korean or not, are reconsidering their roles in society. One of them is the award-winning Spanish designer Curro Claret, who is famous for his designs that use bread crumbs and church benches for the homeless.?

“I definitely believe designers can help and have a participation [in social issues],” wrote Claret in an e-mail interview.

“Theorist John Thackara says what?designers can do sometimes is to suggest other realities more desirable than the?one we have,?so people can start to see we can live in a different way, with more respect and justice.

“These images are not necessarily the final solution, but [they] encourage certain changes. As a designer, we should design much more than beautiful things to sell.”