Lifting the veil on the mysterious death business

Lifting the veil on the mysterious death business 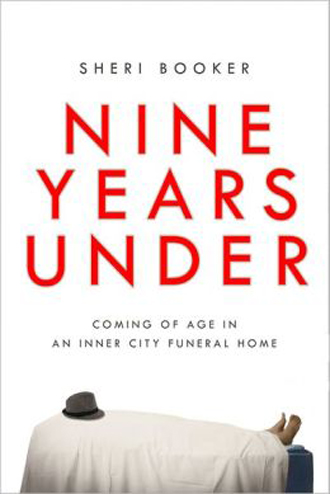 Sheri Booker was 15 when she got a summer job at a West Baltimore funeral home. In the beginning, she answered phones and babysat bodies, showing guests into the funeral home’s viewing room. But over the next nine years she was given almost every task, from writing obituaries and driving a hearse to lifting bodies and painting women’s fingernails.

In ``Nine Years Under,’’ Booker describes her life in the death business. The result is alternately creepy and captivating, drawing readers in with the same you-can’t-not-look quality of a highway crash.

Booker’s story revolves around the Albert P. Wylie Funeral Home, a family operation that serves a mostly black clientele. The owner, Al Wylie, is an acquaintance from church and had just buried Booker’s Aunt Mary when he offered her the job.

Saying “yes” puts her at the center of the seemingly never-dull world of the funeral home. On one occasion, Booker listens as two men vow to avenge the murder of their brother while standing over his corpse at a viewing. On another, she finds guests have left a bottle of cognac and a bag of marijuana in a casket. Then there are the friends of a teenage transvestite who died of AIDS who ask that her bra be stuffed because “she had breasts before she got sick” and a daughter who asks that her father look more dead.

Beyond people, Booker also introduces readers to the quirks of the funeral business. She says that in Maryland, writing on a death certificate in blue ink invalidates it, that insurance companies contest policies less than two years old, and that when a man is dressed in a suit for his funeral, his jacket is often slit up the back to make it easier to get on, the shorn ends then tucked under the deceased’s back.

“Coming of Age in an Inner City Funeral Home’’