Buzzwords, but still looking for results

Buzzwords, but still looking for results 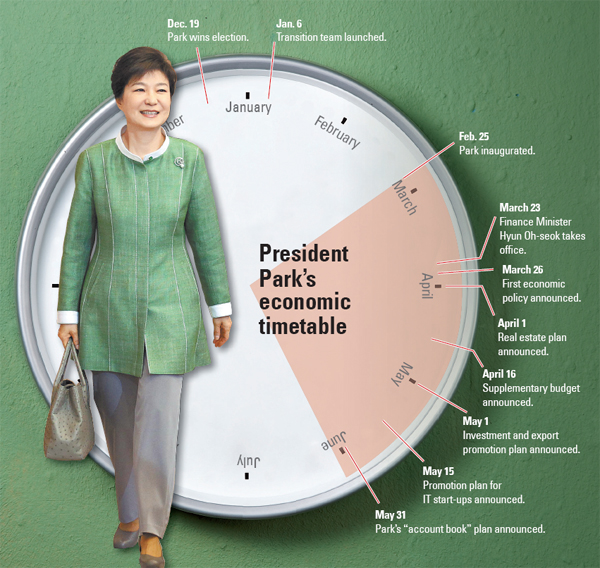 This is the 100th day of the Park Geun-hye government, and the public response to the president’s economic policies is clear: People still don’t understand the concept of a “creative economy,” and “economic democratization” hinders the country’s growth.

The two key phrases have become everyday words, yet they have had no discernible effect.

In a recent Ministry of Science, ICT and Future Planning survey of about 6,500 people, the government found that the vast majority (88 percent ) had heard of the creative economy and said the country needs such a new economic direction (85 percent). Still, more than half said they found no difference between Park’s creative economy initiatives and policies of past governments.

“Since people pay more attention to how policy plans are actually carried out, it will take more time for the government to make people understand its policy,” said Chung Young-sik, a researcher at Samsung Economic Research Institute.

“The government needs to release more specific measures to help people understand the concept,” added Kim Sun-bin, another researcher at the institute.

The lack of understanding about a creative economy stems at least in part from delays in establishing new government branches and appointing new leaders. The Future Planning Ministry was at the heart of controversy from the very beginning, and it took several months before Choi Moon-ki started as its minister.

Without knowing what the creative economy is, expectations for new policies were low and uncertainty continued to grow. Hyun Oh-seok, deputy prime minister for economy and finance minister, also took office later than planned, adding to public perceptions of economic uncertainty.

And Park’s economic team has had no defining moment. Rather, under the creative economy initiative it has been busy pouring out a series of policy measures every few weeks.

Hyun, chief of the country’s economic control tower, came up with a 100-day action plan that would serve as a guide for effective implementation of the president’s policy.

Starting from the first economic policy direction announced March 28, the government unveiled a series of measures: real estate policy on April 1, supplementary budget on April 16, investment and exports promotion plan on May 1, start-up plan on May 15 and “account book” plan last Friday.

Of the measures announced, experts see the supplementary budget and real estate plans as the most effective so far.

“The government’s plan to increase spending and the real estate plan have helped stabilize the market,” said Chung.

Although the government is making all-out efforts to boost the economy, growth has been unprecedentedly low.

The Ministry of Strategy and Finance said yesterday that consumer prices grew 1 percent in May from a year earlier, the lowest inflation rate since September 1999.

The inflation rate has remained in the 1 percent range for seven straight months, and the economy grew less than 1 percent quarter-on-quarter for the past eight quarters. First quarter GDP growth was 0.9 percent.

Industrial output, a crucial indicator of GDP growth, continued to drop in the first three months of the year, especially in the mining and manufacturing sectors. However, in April it managed to pick up 0.8 percent month-on-month.

Another prominent economic goal of the Park government is to raise the country’s employment rate to 70 percent.

Critics say it will be an elusive goal if growth remains low.

In a recent report, Hyundai Research Institute said the economy needs to expand 8 percent each year to add 478,000 jobs annually.

In regard to the government’s other key policy initiative, many have come to see economic democratization as a hindrance to growth.

“What is most urgent next to growth is to promote investment, but companies are unwilling to make investments amid the increasing uncertainty in the business environment at home and abroad,” Kim said. “The government’s economic democratization initiative is partly desirable, but there is concern that it shouldn’t be done in a way that contracts normal business operations.”

The government and lawmakers plan to discuss the so-called economic democratization bills this month at the National Assembly.

“It is desirable to make an environment that emphasizes autonomy and responsibility, rather than imposing rules and regulations, if the government wants to realize a creative economy and economic democratization,” said Bae Sang-geun, an official at the Federation of Korean Industries.