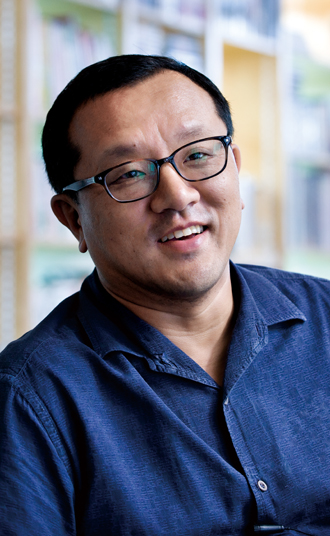 The eldest son of former President Chun Doo Hwan was named as a tax haven client in the latest revelation into a secretive offshore money network, fueling suspicion that the money could be linked to the hidden assets of the convicted military strongman.

Chun Jae-kook, the eldest son of former President Chun, created a shell company in the British Virgin Islands on July 28, 2004, said the Korea Center for Investigative Journalism, an independent media group operating the online site Newstapa, yesterday during a press conference. The announcement was the fourth revelation by the center regarding Korean tax haven clients.

According to the center, Chun was registered as the sole director and exclusive shareholder of the shell company Blue Adonis since Aug. 13, 2004. Chun used an address in Seocho-dong, southern Seoul, in the shareholder document, and the address is consistent with that of his publication company Sigongsa, according to the center. Chun’s handwritten signatures in English also appeared on various company documents and his passport number was also confirmed, it said.

The timing of Chun’s establishment of the shell company and the subsequent operation of its corporate bank account coincides with the prosecution investigation in Korea in 2004 into his younger brother’s tax evasion charges.

At the time, the probe fueled criticism toward former President Chun that he concealed massive slush funds under his family members’ names while having failed to pay enormous outstanding fines.

“We found evidence that Chun Jae-kook owned the shell company for more than six years and transferred funds to an overseas bank account linked with it,” the center said. “We wanted to meet with him and listen to his position about this, but he declined to comment.”

According to the center, Chun registered the firm with a capital of $50,000 but only issued a single one-dollar share, a typical practice of a shell company.

Chun’s firm created a corporate account with the Singapore branch of an Arab bank, the center said, noting that its revelation is based on information provided by the International Consortium of Investigative Journalists and its own investigation in Singapore.

The center said e-mail exchanges between Chun’s company, his lawyer in Singapore and Portcullis TrustNet which assisted Chun in setting up his shell company, showed that Chun wanted to open the bank account by Sept. 22, 2004, but was unable to do so because necessary documents had gone missing during delivery from the Virgin Islands to Singapore.

The e-mails exchanged at the time also said the money in Chun’s bank account was frozen because of the delay in creating the corporate account and Chun was extremely upset, the center said.

“It is possible to conclude that Chun was trying urgently to move money from one account to the shell company’s account in an Arab bank,” the center said.

The center urged the authorities to investigate the source of Chun’s money, noting that his younger brother was convicted in 2004 for evading 7.1 billion won ($6.28 million) in gift tax after inheriting a large sum of money from his father and grandfather. Of the 16.7 billion of the inheritance, 7.3 billion won was later found to have come from the former president’s slush fund.

Yesterday’s revelation about Chun’s money management using a tax haven also came as the nation’s prosecution vowed to go after his father to uncover the family’s hidden assets and collect the unpaid fine.

Chun Doo Hwan, who came to power with his 1980 military coup, was convicted of treason and accepting massive bribes in 1997. Although the Supreme Court ordered him to pay 220.5 billion won, he has paid less than 25 percent of the fine. Although his outstanding fine total is 167.2 billion won and the deadline is Oct. 11, Chun has refused to pay the rest, insisting that he only has a total of 290,000 won of personal money.

Speculations were high that the former president has concealed his wealth under his family members’ names, including his three sons.

The main opposition Democratic Party yesterday said the revelation of the Chun family’s ties to the tax haven must be investigated thoroughly. Representative Kim Kwan-youg, spokesman of the DUP, said the prosecutors must lay bare the source of money that Chun Jae-kook used to create the company. The People’s Solidarity for Participatory Democracy yesterday issued a statement and urged the tax and law enforcement authorities to reveal the truth about Chun’s slush funds.