Homeless with nowhere to turn

Homeless with nowhere to turn 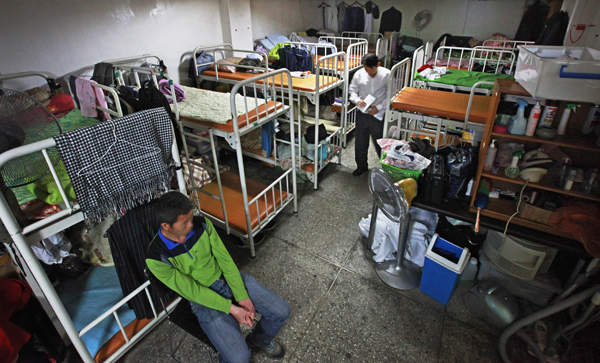 About 45 homeless people reside at a shelter run by Minjok Sarang Church beside Seoul Station. They are required to participate in a church service before being served lunch. By Park Sang-moon

At noon on a recent afternoon, a 65-year-old man surnamed Kang was lying on a bench in Yeongdeungpo Park, southwestern Seoul, resting his head on a dirty plastic bag. His bushy beard and dirty clothes indicated that he hadn’t washed up for quite some time and probably did not have a place to call home.

Passersby hardly noticed Kang, one of the city’s thousands of homeless people, but he certainly had a story to tell. His experiences - from financial ruin to life at shelters - are representative of many who lose their homes and fall through the cracks, left to fend for themselves on the streets.

Kang said he had been homeless for about seven years since a series of failed business ventures left him penniless and alone. With no house or job and only a self-described “sense of shame,” he first found shelter at Seoul Station.

But in August 2011, the Korea Railroad Corporation and Mayor Oh Se-hoon evicted the station’s roughly 300 residents, and Kang had his first experience with government support.

“Many of the people there went to other stations instead of going to homeless shelters because they had already experienced what it’s like there,” said Kang. “But me and this other man who had never been to one of those shelters, we decided to go into a shelter as recommended by the officers at the station.”

His time at the shelter in Dongdaemun, operated by a local church, was less than ideal. It seemed to be having financial trouble, according to Kang.

“The food was disgusting, and it was so humid. And they force you to attend a church service before you can get a meal,” he explained. “I didn’t like that.”

He left after three weeks and went to a shelter in Yeongdeungpo District that was operated by the Seoul Metropolitan Government. The food there was “bearable,” but Kang ran into a problem faced by many homeless people.

The strict regulations were too much to bear for many of the residents, who were accustomed to living independently as adults. They also found it hard to adapt to life in a group environment.

Kang said he got into a fight with another homeless man at the shelter as he “kept on provoking me” and decided to leave the shelter for good.

Since then, he’s fended for himself, staying most of the time at Yeongdeungpo Station with many of the people who previously called Seoul Station home.

He said he feels “a lot happier now that I can enjoy freedom and independence.” For food, he relies on handouts from civic groups if he gets up early enough to wait in line. Otherwise he begs for money and “maybe can get at lunch set a McDonald’s for 3,000 won [$2.70].” 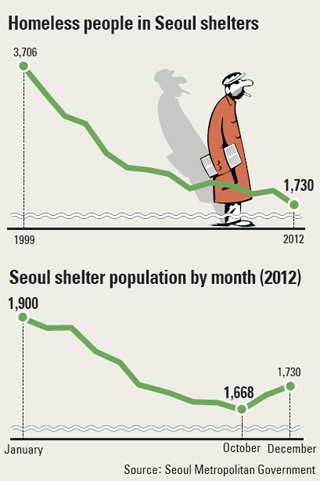 Kang’s complete rejection of the shelter system is an example of what worries advocates for the homeless, who support a more flexible system for people accustomed to more independence in life.

Kim Sung-jae, head of the Salvation Army Self Support Housing Welfare Center, said it is important to provide homeless people with customized support as their “needs are different.”

“It’s important to talk to each individual and find out their characteristics and how much they are willing to stand on their own feet again to provide them with the proper support programs,” said Kim. “The government must thoroughly study why the homeless prefer to sleep at stations or on the street instead of at shelters.”

“At our shelter, there are a group of people who just stay here for a while only during the winter to escape the cold but there are also a group of people who have a strong will to work, save money and stand on their own feet again,” Kim said. “What they need is a home where they can reunite with their family, so we offer them houses with subsidized rent.”

According to Kim, the LH Corporation, the country’s state-run developer, has been providing rental homes at one-fourth to one-fifth of market prices to homeless people. Beneficiaries must save 3 million to 4 million won for a deposit before they can move in. Monthly rent ranges from as low as 50,000 won to high as 200,000 won depending on size.

“In the center, of course there can’t be 100 percent freedom. There are regulations they should follow, and we make it compulsory for them to save a portion of their monthly salary. And some people don’t like that and leave,” said Kim. “For those people, there needs to be a different program. Those people are better off living in goshitel by themselves, controlling their own money. But most importantly, they should not be abandoned.”

Choi Seong-won, head of Homeless Mission, had similar ideas based on his decade of experience serving the homeless and observing their lives. Choi has been providing free meals and shelter for homeless people in Yongsan District, central Seoul, since 1997.

“Except those who are intellectually disabled, all of them try everything they can to not fall into this situation of being homeless. Nevertheless, if they become homeless, it means that they have lost everything, even their purpose in life,” Choi said. “The longer they are homeless, the more their humanity is destroyed.”

“If they get money, they drink. Most of them don’t bother looking for a job. What they need is close attention and counseling,” said Choi. “There was this homeless man who has become like a close friend. He’s been staying at my shelter for a couple of years. While talking to him, I realized that he hoped to support himself again but was discouraged because he didn’t know where to start.”

So Choi rented a small room at a goshitel for the man because he didn’t want him to be “conscious of other homeless people’s looks or what they thought of him.”

The solution seemed to work. With a little bit of independence, the man found a job with a parcel delivery service and now pays his own rent, according to Choi. He even visits the shelter to volunteer from time to time.

“After watching him grow to support himself again with just a little bit of financial help and sincere care, I realized that these people need more than a roof over their head and food to get by,” said Choi. “I’m not saying all the support provided by the government is useless, but at this moment, we need customized support.”