Talks proposed for June 12 in Seoul

Talks proposed for June 12 in Seoul 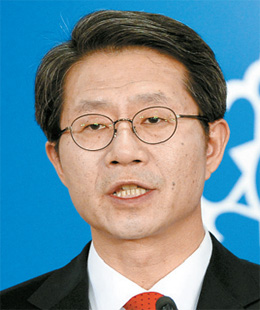 South Korea yesterday proposed to hold ministerial-level talks with Pyongyang on June 12 in Seoul, accepting North Korea’s proposal for a government-level meeting to resolve the matter of the shuttered Kaesong Industrial Complex and other inter-Korean business.

Seoul’s Unification Minister Ryoo Kihl-jae said at a press conference the South Korean government accepted Pyongyang’s proposal for dialogue and suggested the venue be Seoul, the capital of the South.

“We positively evaluate the North’s acceptance of inter-Korean official talks, which our government has constantly proposed so far,” Ryoo read in a statement. “In order to resolve the current affairs between the two Koreas, including the Kaesong Industrial Complex, the Mount Kumgang tour and the matter of the reunion of separated families, we propose a ministerial-level inter-Korean talks in Seoul on Wednesday the June 12.”

“In order to discuss some working-level matters to hold the meeting, we ask the North to resume the communication channels between the two Koreas, including the liaison office in Panmunjom,” Ryoo said. “Through resuming the meeting .?.?. we hope inter-Korean relations develop based on mutual trust.”

An unnamed spokesperson of the Committee for the Peaceful Reunification for the Fatherland, a mouthpiece of Pyongyang in charge of Southern affairs, issued a statement yesterday, which was announced on the North’s official state media Korean Central TV.

“Taking the June 15 [inter-Korean joint declaration in 2000] as an opportunity, we proposed a talk between North-South authorities for normalization of the Kaesong Industrial District and a resumption of the Mount Kumgang tour,” the statement read. “At the meeting, both sides could also negotiate some humanitarian issues, including reunion of families or relatives [who were separated during the 1950-53 Korean War.]”

“The Southern side can pick the time and the place they prefer,” it added.

The Kumgang Resort was shut down in July 2008 when a South Korean female tourist was fatally shot by a North Korean soldier.

The Kaesong Industrial Complex was effectively shut down early last month after North Korea imposed an entry ban on all Southern workers into the complex and pulled out all of its 53,000 workers in April.

With the closure of the eight-year-old industrial park, which was the last remaining legacy of the Sunshine Policy, all inter-Korean business has been halted. The North Korean committee also expressed its willingness to reconnect inter-Korean communication through the hotlines they cut off previously, if Seoul accepts its proposal.

“Immediately after the Southern government accepts our proposal, we will take measures regarding communication, including restarting the Red Cross hotlines of Panmunjom,” the spokesperson said.

Unnerved by the annual joint military exercises between Seoul and Washington, Pyongyang unilaterally cut off all communications through the hotlines on March 11.

The committee’s proposal also includes holding an inter-Korean event to mark the 41st anniversary of the July 4 Joint Statement, which was made in 1972 between former leader Kim Il Sung and late Southern President Park Chung Hee, father of President Park Geun-hye. “With participation of authorities and civic groups between the two Koreas, it would be remarkable and helpful for improving North-South relations if [we] mark the June 15 Joint Declaration and the July 4 joint statement,” it said.

The committee also urged Seoul to approve the visit of business owners from the South who ran factories in the Kaesong complex and other civilian-level interactions.

So far, President Park has repeatedly proposed official talks to Pyongyang in an effort to improve inter-Korean relations, including the matter of the Kaesong complex, but North Korea rejected it.

However, when a nongovernmental North Korean organization proposed a joint event in Kaesong or Mount Kumgang on May 22, Seoul refused the offer and adhered to official talks only.

China welcomed the resumption of talks between the two Koreas.

“We are glad to hear that both Koreas decided to resume contacts and dialogue, and we welcome it,” Chinese Foreign Ministry spokesman Hong Lei said in a statement yesterday.

“It is good behavior by North Korea to show a responsible attitude for the peace and prosperity of the Korean Peninsula,” Yoo Il-ho, spokesman of the ruling Saenuri Party, said. “But North Korea should demonstrate that this proposal is not a trick to pull the wool over the eyes of the international community or that it has other political agenda.”

The largest opposition Democratic Party’s spokesman Park Yong-jin also said the proposal is expected to be “a turning point for transition of inter-Korean affairs.”

South Korean business owners asked for no repeated suspension of the complex. “We express our position on welcoming the proposal and our government’s acceptance,” Han Jae-kwon, representative of the South business owners at the complex, said at a press conference. “As the losses of the [South’s] companies are drastically increasing due to the two-month-long suspension of the complex, we ask [the government] not to repeat this kind of situation and swiftly resume operation.”

The North’s change of attitude in inter-Korean affairs came ahead of the summit between U.S. President Barack Obama and Chinese President Xi Jinping today, where North Korean affairs are expected to be one of the agendas. President Park will also meet with Xi at the end of the month to discuss similar North Korean issues.