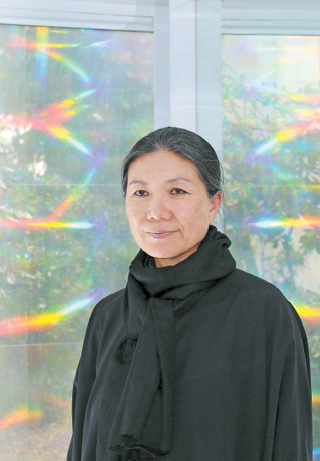 Artist Kimsooja poses in the Korean pavilion that she altered into an artwork of light and darkness for the 55th Venice Biennale. By Moon So-young

VENICE, Italy - For the 55th Venice Biennale, artist Kimsooja made a bold decision about the Korean pavilion, which has a notoriously challenging design. The 56-year-old artist has not installed any paintings or sculptures in the metal and glass architecture with curved walls. But she has filled it with more than emptiness - natural sunlight, iridescent colors from the sunlight, mirror reflections of viewers, the sound of breathing and, in the heart of the structure, darkness.

Kimsooja’s “nonmaterial” exhibition at the Korean pavilion, titled “To Breathe: Bottari,” opened on May 30 during the previews of the Venice Biennale, or La Biennale di Venezia. The world’s oldest and most influential contemporary art festival officially started on Saturday and runs through Nov. 24.

“It isn’t a space easy to exhibit in, but I have tried to make the problem a solution,” the artist said at the opening.

Visitors to the Korean pavilion, which is located in the Giardini, one of the biennual show’s two main venues, were standing in a long queue as of May 30 and 31. It was partly because it took some time for visitors to take off their shoes as required at the entrance. 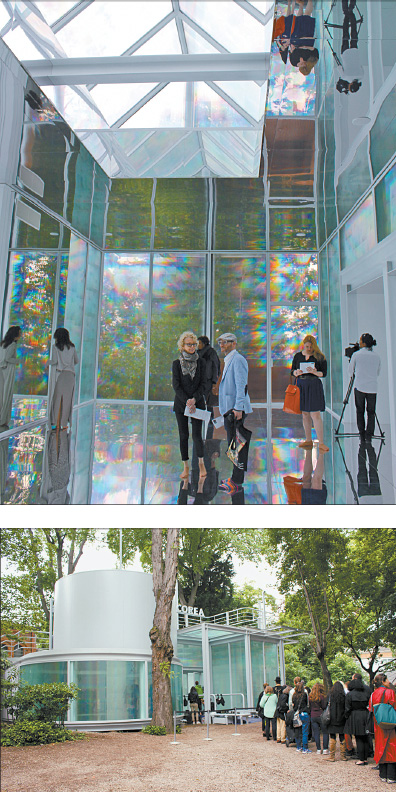 Visitors, above, wait to enter the Korean pavilion, top. By Moon So-young

Then, the visitors walked on the floor of the pavilion, which Kimsooja altered into mirrors. They saw and felt the numerous rainbow spectra formed by sunlight passing through the pavilion’s glass ceilings and walls, which the artist covered with translucent film. The spectra doubled, as they were reflected on the mirror floor. The viewers also heard a humming sound, which is actually the artist’s breath, resonate in the air corresponding to the light spectra.

And then the visitors were led into a dark room in the pavilion in groups of three at a time, experiencing a sudden transfer from the shower of iridescent light and sound to absolute darkness and silence. After feeling around the room in utter blindness for one minute, they were led out again into light and sound.

“It was a strange experience,” said Paola Boscolo, a visitor from Venice. “You feel that you are in a certain space with some other people but you don’t know who they are, how wide the space is, or where you are going, so you come to feel fear from the unknown. You try to touch what you don’t know. It is somewhat like our life.”

“And the dark space is linked to the space of light,” she continued. “So, the message of the artwork seems to be the mystery of the world and life.”

“With this work, I want to say light and darkness are oneness,” Kimsooja said. “This is a nonmaterial embodiment of my concept of sewing and bottari that I have developed for the last three decades.”

She won fame with the 1997 performance and video “2,727 kilometers Bottari Truck.” For the work, she traveled throughout Korea for 11 days on a truck loaded with bottari, a Korean traditional cloth bundle used to carry belongings. She presented the bottari truck at the 1999 Venice Biennale’s main international exhibition.

“Sewing is crossing borderlines between the inside and outside and between any two opposing things - myself and others; human and nature; yin and yang; and light and darkness - and linking the two as a whole,” the artist said.

“So, this work is a kind of sewing,” she continued. “I also intend to make the Korean pavilion a bottari - a breathing bottari.”

Just as a bottari makes a very flexible boundary between the inside and outside, the pavilion’s now-translucent walls link the inside and nature outside, folding and unfolding the phenomenon of light, she explained.

The New York-based Korean artist presented another representative work, “A Needle Woman,” which is a series of performances and videos made from 1999 to 2001, in the 2005 Venice Biennale’s international show. But this is the first time she has been invited to represent the Korean pavilion.

“I have thought of me as a self-exile ever since I left Korea in 1999, but now I review my relationship with the mother country, working for the Korean pavilion,” she said.

“I feel like I’ve come back home here, although there are no special Korean qualities,” Korean poet Ko Un said at the opening. “Here is everything ... light ... darkness ... I feel like I’ve returned to my mother’s womb.”

The 79-year-old literary lion has been staying and teaching in the Italian port city since March at the invitation of Ca’Foscari University of Venice. He was appointed the university’s honorary fellow in April.

“Yes, I thought of a womb, when making the dark space,” Kimsooja said. “And the viewers will feel like they are reborn when they come out into the space of light.”