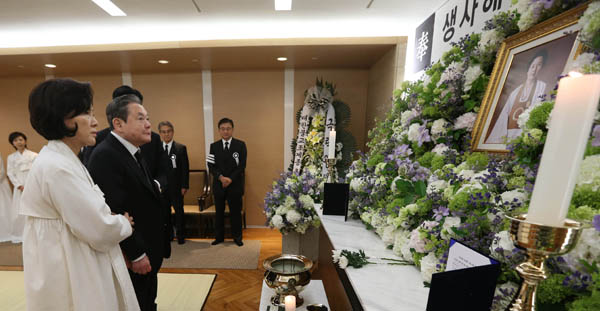 Paying respects - Samsung Chairman Lee Kun-hee pays his respects before the mourning altar of his mother-in-law Kim Youn-nam yesterday with his wife, Hong Ra-hee, left, director general of Leeum, Samsung Museum of Art and the eldest daughter of the deceased. Kim, the wife of the late Hong Jin-ki, the former chairman of the JoongAng Ilbo and Tongyang Broadcasting Company, died Wednesday. The two are survived by six children including Hong Seok-hyun, chairman of the JoongAng Ilbo. A number of influential figures, including former President Lee Myung-bak, Democratic Party Representative Moon Jae-in and Venerable Jaseung, executive director of the Executive Office of the Jogye Order of Korean Buddhism, paid visits to the Samsung Medical Center to show their respects yesterday. The funeral ceremony will be held in the Won Buddhist tradition at 7:30 a.m. today. By Ahn Seong-sik