What goes on beyond an airport’s terminal doors

What goes on beyond an airport’s terminal doors 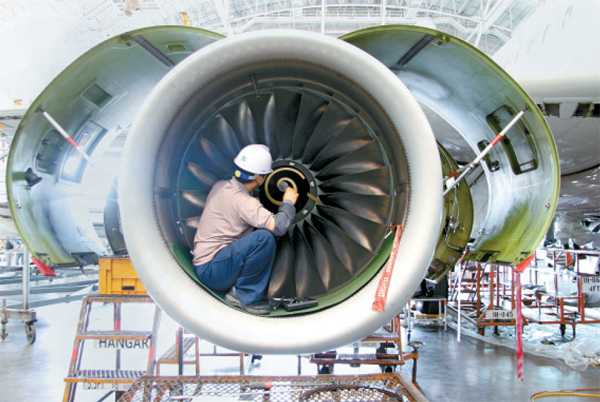 A mechanic checks a propeller at an Asiana Airlines hangar in Incheon International Airport. By Kang Jung-hyun

INCHEON - Many Koreans are familiar with the passenger terminal at the Incheon International Airport.

But very few people know about the facilities outside of the terminal.

Driving 10 minutes from the terminal, a logistics center of the airport which is restricted to the public bustles with baggage and boxes containing a full-range of duty-free goods bound for pick-up at the gate.

A line of 33 bags and 47 boxes with “customs” stickers attached to them is set to pass through the X-ray inspection machine before getting to the airport. Inside are 2,228 duty free items worth 112 million won ($99,904) waiting to be picked up by passengers.

“A handful of trucks with five-ton capacity go back and forth between this logistics center and the airport,” said Kim Jeong-bae, an official of the center.

The goods take up a 4,132-square-meter (4,942-square-yard) room on the second floor of the cargo center in a clear manifestation of the materialistic yearning prevalent in modern society.

Noh Eun-kyung is tasked with screening any suspicious goods smuggled into Korea through the X-ray scanners. The 32-year-old customs official stares at the four monitors connected to the X-ray machine.

“If the monitors show a white empty space between goods, chances are the luggage contains concealed illegal stuff,” she said.

The majority of passengers’ luggage used to be filled with papers, but now they carry duty-free items.

The volume of products requiring customs inspection has constantly gone up, but the number of customs officials remains the same.

The security officers complain of strained eyes after a day of examinations. Other customs officers are responsible for attaching different-colored seals to identify goods.

The yellow tag indicates tobacco and alcohol, while the orange label represents meat. The red seal is used for guns or other dangerous weapons.

The customs office last year busted 62,000 airport users attempting to bring in items exceeding their duty-free allowance. The amount of fines slapped against them is 1.2 billion won.

At the Asiana Airlines hangar along the airstrip, which is 63,800 square meters, an Airbus A321-200 is about to receive its preventative maintenance check.

As the largest aviation shed, the maintenance hangar can handle two B747 aircraft along with one B767 at once. A total of 1.1 billion won was invested to build the hangar.

“It will take four to five days to determine whether the airplane has any problems that could compromise passengers’ safety,” said Lee Tae-woo, who conducts the maintenance test.

In the kitchen of in-flight catering service provider LSG Sky Chefs, a dozen chefs make every single dish. But their job is not confined to cooking.

Meal preparation begins about 10 hours in advance of a flight. The foods are kept frozen. Almost two hours prior to the flight, the trays are packed into carts. The meals are then heated again in the kitchen onboard.

Until the plane takes off, the culinary staff try to keep the food as fresh as possible. After all that effort, the cooked meals are finally served to the passengers.