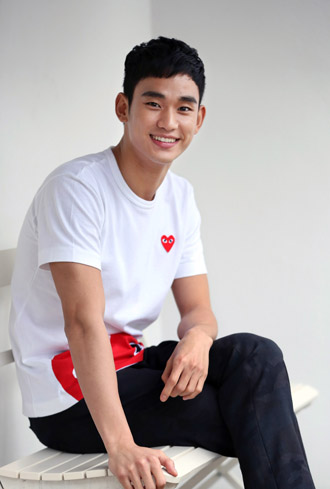 It might be impossible to see “Secretly, Greatly” without being immediately drawn to the protagonist, Kim Soo-hyun, who switches back and forth from an agile spy to perfect idiot.

His Webtoon-based movie “Secretly, Greatly,” which opened last Tuesday, is centered on an elite spy, Won Ryu-hwan, from the North who has gone through brutal training, only to be ordered to play an idiot named Dong Goo in a poor neighborhood in South Korea. And Kim Soo-hyun just effortlessly plays the dim-witted big brother, Dong Goo, wearing in his trademark green tracksuit.

With his immense popularity, the film’s success was somewhat predictable. But it took unexpected turns to continue breaking box office records by storm. It has set a record to be the first Korean film to sell 3.49 million tickets in the shortest period (five days) in theaters. That number already is the top-ranked ticket sales among Webtoon-based movies, beating “Moss” in 2010.

However, the movie did not set off breezily as it faced scathing reviews from critics before the release. Now the harsh criticism just serves as a counterexample of the star quality the 25-year-old is endowed with as the heartthrob surely plays the biggest part in attracting moviegoers.

The JoongAng Ilbo sat down with the star to discuss his first lead role, the challenges of shooting the film and his future.

Q. You shot to stardom in the smash hit drama, “The Moon That Embraces the Sun” last year. How was it?

A. I was overwhelmed by so much attention in such a short period. I felt burdened because there seems to be more things I had to be responsible for. I felt like a coward for a while. I didn’t want to go outdoors and I didn’t like myself. Now I’m getting used to the attention. It seems like the spotlight motivated me to be a better person. I came back to school this semester. I felt that I changed a lot.

What is the biggest difference you made?

I used to like to be front and center with a big mouth, Now, I find myself more comfortable just sitting in back and observing my friends. I became so reserved that I can’t say hello to newcomers in my college.

Your movie “Secretly, Greatly” is a little distracted by a lack of focus.

I was too focused on the disappointing parts of my performance while watching it. I think it will take some time before I can watch it and get the grasp of the whole plot.

What left you feeling unsatisfied?

The fighting scene left much to be desired. When I shot the action scene with the North crew on the roof of the building, it was hard to deal with both physical and emotional action. Especially as I couldn’t focus on expressing subtle emotions because it was so freezing cold that I was stiff and trembled. It was really irritating, so I once hit the ground with my fist.

It is your first lead role in a movie after the small role in the film “The Thieves” last year.

When I played the youngest thief, Champano, I felt like I was building a small belfry just belonging to a sand castle. This time, I feel like my co-stars built each of their towers and I played the role of bridging them.

It’s completely the opposite to play an idiot and elite spy. How was it?

Rather than an excellent performance, I thought what mattered was what kind of idiot I could show. I tried to portray a natural idiot so people can just sit back and enjoy.

How do you evaluate your performance in a lead role?

I spoke with Choi Dong-hoon, director of the film “Thieves.” He told me my performance kept him sufficiently riveted throughout, even though I appeared the whole time. It was the best compliment I ever heard from him. But actually, I was fed up by my voice halfway through. I wanted to play it as naturally as if I became a sponge that gradually soaked up water.

What would you choose between a role that you can show your prowess or one that challenges you?

I would choose the latter. It is also good to have compliments, but I think I’m now at a stage where I should keep challenging myself.

Is there any particular role you want to try to play?

I want to act an unlikable character just like a ruthless murderer in the 2010 movie, “I Saw the Devil” that Choi Min-sik played. I mean a character nobody would ever like. I just want to embody and exude such an ambience.