Publisher discusses top-shelf books and his next chapter

Publisher discusses top-shelf books and his next chapter 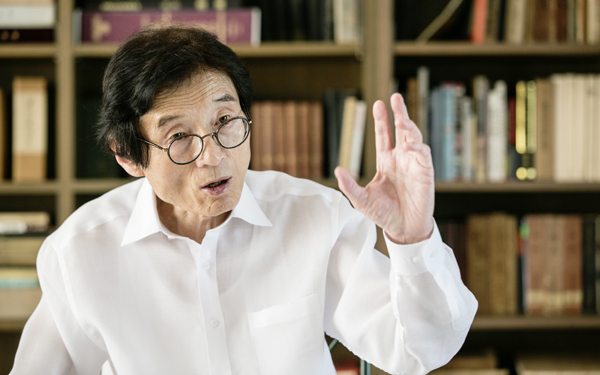 Lee Ki-woong dreams of building a “Book Farm City” where books, rice and people coexist. The 73-year-old father of the Korean publishing industry is famous for putting out arts titles in the 1960s when books on arts were scarce. After becoming chairman of Paju Publishing & Cultural Information in 1991, Lee led efforts to build Paju Book City, overcoming opposition from the past governments. Lee shared his views on books and the plan for the next-generation book city in a recent interview with the JoongAng Sunday.

Q. Why did you become a publisher and how did books come to mean so much to you?

A. I always lived with a myriad of books since I was young and ran errands to make money to buy books. The smell of mold was all over me, because there were so many books around me all the time. It’s been 60 years since I started publishing books. I published my first book when I was a high school student. Books make humans be human. There is an anecdote that a teacher told his disciple to ask questions to books when he dies. Books are a combination of people’s wisdom and technology. Good books can be good tools.

What are some good books?

Good books should have no falsehoods. Confucius said good poems are ones that make people think right. I think good books can establish humanism with good words that help maintain families and states. I can recommend some good books that have changed the world. Plutarch’s “Parallel Lives,” Augustine’s “Confessions,” Darwin’s “On the Origin of Species” and Jeong Yak-yong’s “Admonitions on Governing the People” are good books. These books created the spirit of past eras by touching people’s hearts. These are what I call “heart books.” A heart book is one that a person always harbors in his mind. My heart book is Litany by Alfred Cecil Cooper. The thrust of the book is that humans are not humans when they don’t eat “food” for their minds. Your life will be beautiful when you live with a heart book.

What are the lessons you learned from your decades of publishing?

The most heart-wrenching lesson is the division of our nation. There is no objective in the fight between the South and the North other than their own interests. There is no freedom of speech, since I get branded as a bbalgaengyi (advocate of the North) or bosuggoltong (extreme right wing) whenever I give my opinions on the division. But I believe we, at least, should be able to say the truth. The story of the divided Korean peninsula would only be a fable 100 years later if we keep avoiding truths about it. I have come to talk frequently about the country’s division after reading Park Myung-lim’s “Requiem for Peace” and Jung Byung-kyun’s “Korean War.” The authors of the books wrote great books even though they didn’t experience the [1950-53] Korean War by making painstaking efforts to collect information about the war. The books tore my heart apart and made me think the conservatives and liberals and the South and the North should make up.

What was your intention behind the donation of 2 billion won ($1.76 million) worth of land to build An Jung-geun Library?

Too many cafes and restaurants have mushroomed in Paju Book City. I wanted to strike a balance between commercialism and humanism. I hope people can learn about An Jung-geun’s grand vision of bringing about peace in Asia. He was not just a young patriot who assassinated Ito Hirobumi. An had a plan to establish a peaceful Asia. He made a surprising proposal 100 years ago that Korea, China and Japan create a joint bank and use a common currency. His proposal is being put into action in some parts of the world now. I want to build a library that sincerely commemorates An’s honor. The main theme will be a library in nature.

Do you have books you would recommend for seniors?

I recommend “The Economics of Happiness” by Helena Norberg Hodge. This book will help readers ask themselves what their life looks like. For young people, I recommend autobiographies of Mahatma Gandhi and An Jung-geun.

How do you assess Koreans’ reading habits?

Koreans don’t read much. There is a tendency for people to stick to best-selling books only. They lack passion to seek knowledge. Korean education is aimed only at passing examinations. We don’t have education that makes people mature. Japan has had a nationwide campaign to make people read since the Meiji era. Koreans got chances to read when they flew to Japan to study in the past. If you look at how British Senate members debate, you will feel the depth of their intelligence.

Koreans should read more. I hope each village has at least one book cafe to give more people chances to read. What makes an advanced country is people who can read and study. Students should read for 30 minutes every day. The power of writing comes from reading. British scientist Michael Faraday couldn’t go to school because he was poor, but he learned by reading books himself at a printing house where he worked. It is not enough to say 100 times that reading is important.

Why did you create Paju Book City?

My aim was to publish good books by cutting logistics costs. In the past, inefficiency ran high, since most publishers, print shops and paper factories were distant from each other. If they work together in the immediate vicinity, costs would be reduced to a third, while quality improves. I persuaded the government by saying that books are more important than cars. It took more than five years to win approval from the government to build a book city within the state-run industrial complex since there was strong opposition from the Roh Tae-woo government. During the Kim Young-sam administration, Prime Minister Lee Soo-sung approved it. But even after the approval, many government officials were displeased with construction of the book city. I kept telling them publishing is a knowledge industry whose efficiency improves when there are beautiful surroundings.

Paju Book City is a product of the first attempt in the entire world. Publishers created cooperatives and launched campaigns with architects to construct low-cost but beautiful buildings. About 300 publishers moved in first. Then filmmakers joined. Thirty-four filmmakers are operating here. Some shopping centers, galleries and hospitals are now springing up. The total number of employees in the book city reaches 10,000.

My next goal is to construct a Book Farm City where we can raise books, rice and people together. People want to be healed because they have an instinct to return to nature. A hopeful candidate for location of the book farm city is a 3.3 million square meters (815.45 acres)of farmland in Goyang, Gyeonggi. If possible, there will be a huge mecca of knowledge and nature stretching from Paju to Goyang.

What do you advise for President Park Geun-hye?

President Park tends to use new words like creative economy and cultural prosperity. It is a good start but she needs to make very detailed efforts to fill the words with substance. Experts and technologists will have to work harder to do so. So the success of the Park government would depend on the president’s capability in judging talented people.

I want to ask the president to show more interest in the publishing and film industries, which will lead the country’s future growth.