Former spy chief to be prosecuted

Former spy chief to be prosecuted 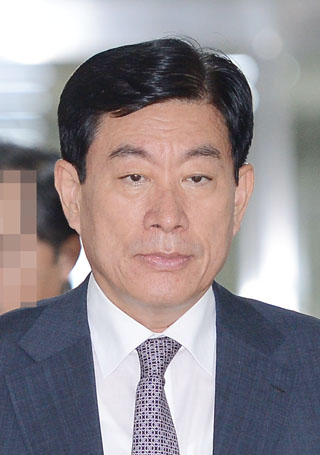 The prosecution has decided to indict a former head of the National Intelligence Service for his involvement in the spy agency’s intervention in last year’s presidential election without physical detention, ending two weeks of controversy surrounding how it will handle the sensitive case.

The Seoul Central District Prosecutors Office said yesterday that it will press charges against Won Sei-hoon, who headed the National Intelligence Service from 2009 till February this year, for election law violation as well as breach of the agency’s internal code of conduct, which requires political neutrality for all of its members.

A special investigation team of the prosecutors launched a probe in April to find out if there were systemic efforts inside the National Intelligence Service to influence domestic politics.

The prosecution suspected that officials from the now-disbanded psychological operations bureau had conducted an online smear campaign against Moon Jae-in, the opposition Democratic Party candidate, in the run-up to the Dec. 19 presidential election.

The prosecutors also investigated the suspicion that Kim Yong-pan, former chief of the Seoul Metropolitan Police Agency, had tried to cover up the scandal and said yesterday it will press charges against him for violating the election law and abuse of power.

After the Democrats made their first accusations against the NIS on the eve of the presidential election, the police conducted an initial probe and announced around 11 p.m. on Dec. 16, 2012 that the investigation found no grounds to substantiate the allegation.

Park won the election three days later, and the police announced on Jan. 3 that it found evidence that an NIS agent had been involved in the cyber smear campaign.

While pressing charges against Won and Kim, the prosecution said it won’t take them into custody.

The prosecution said its investigation found that Won ordered the expansion of the psychological operations bureau after he took office.

In major elections, the bureau was suspected of conducting smear campaigns against opposition candidates by calling them “pro-Pyongyang” and prosecutors believe Won was briefed about the operations.

The prosecution, however, decided not to seek a detention warrant because it has no hard evidence to back up the suspicion that Won had actually ordered the NIS to intervene in the elections. The prosecutors concluded that Won could be held accountable for his mismanagement of the agency, but it would be difficult to prosecute him for ordering the operations.

“We made the conclusion based on the charges we have uncovered so far and the closely approaching deadline,” Lee Jin-han, a senior prosecutor at the Seoul Central District Prosecutors Office, said. The statute of limitations for Won’s case expires on June 19.

For the past two weeks, the prosecution was in a predicament on how to handle the case.

While the special investigation team at the Seoul office wanted to indict Won with pretrial detention, the Ministry of Justice disagreed with the plan, citing lack of legal grounds. The Supreme Public Prosecutors Office proposed a compromise of pressing election law violation charges against Won without pretrial detention, and the special investigation team and the ministry finally accepted the idea yesterday.

Hours before the prosecution’s announcement, Democratic Party Chairman Kim Han-gill held an urgent press conference and said the largest opposition party will try to dismiss the justice minister over the Won scandal.

“We have no choice but to submit a motion to dismiss Justice Minister Hwang Kyo-an,” Kim said yesterday morning. “The National Intelligence Service’s politicking and the police’s attempts to cover up the operation are crimes against the state and they undermine the constitutional order. And yet, the justice minister, who should have been the last bastion of the rule of law, became a stumbling block [to punish them].”

Kim condemned Hwang for having ignored the prosecution’s demands for a pretrial detention against Won and ordering investigators to drop election law violation charges.

To dismiss a cabinet member including a minister, a motion, sponsored by more than one-third of the National Assembly members, is required to win the majority vote. The legislature has 300 seats and the motion requires more than 151. As of now, the DP has 127 lawmakers.

“Allowing the prosecution to have a thorough, fair investigation will be the only way for the Park administration to protect the integrity of the presidential election and its legitimacy,” Kim said.