Delight in the sight and smell of Gangwon’s gorgeous flowers

Delight in the sight and smell of Gangwon’s gorgeous flowers 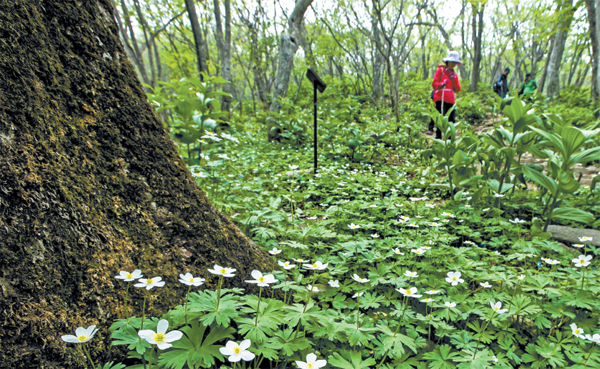 Regular mountain trekking in itself is pretty difficult for average people. But “wild flower trekking” to see the seasonal plants can be even more complex.

You are told to dust off your shoes before starting the trek to prevent the inflow of foreign species. You must not deviate from the designated trail and cannot bring pets or tripods that could damage the wild flowers. It is forbidden to pick any of the flowers, as many are endangered, and this is all on top of strict registration requirements and daily entrance limits.

Taking a good picture of wild flowers is even harder. You must be extra-cautious not to step on wild flowers, and even if you get the perfect shot in your viewfinder, bringing the camera into focus isn’t easy. Korean wild flowers are so tiny that they sway a lot even in the slightest breeze.

But once you learn about wild flowers, it’s a whole new world. For starters, the names are quite memorable. There is a species named “Baby’s Poop,” as when you snap off the stem, a juicy, yellow liquid comes out. There is also a species named “Mouse’s Urine” for its pungent odor.

The language of flowers is also filled with humor. Eolleji (Dog-tooth Violet), a flower that signals spring, is nicknamed “a woman in a love affair” as it looks like a skirt blown up in the wind. 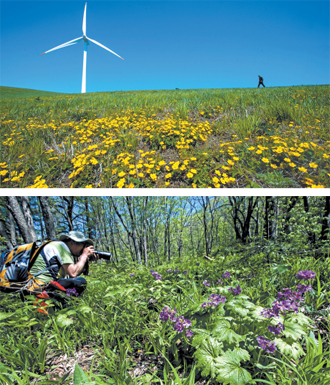 Top: Wide flowers named Hollabi Baram (Widower Wind) make a beautiful scene in Inje, Gangwon. Middle: Cinquefoil close to the peak of Seonjaryeong in Gangneung, Gangwon. Above: A photographer waits for the wind to stop to take a good shot of Large Primroses at Seonjaryeong.[JoongAng Ilbo]

The tales related to wild flowers are just as intriguing. Jokdori from Gombaeryeong in Inje, Gangwon, tells the story of a village girl who was picked to be a palace woman but later sold as a slave to China. Perhaps to mourn the poor soul who never married but engaged in hard labor her whole life, the flower is shaped like jokduri (a bride’s headpiece for a traditional Korean wedding) and has a similar-sounding name.

As the early summer is considered the best season for wild flowers with bigger and more colorful blossoms, the JoongAng Ilbo introduces three places for wild flower trekking - all of them in the Gangwon. They are Gombaeryeong in Inje; Seonjaryeong in Gangneung; and Bunjuryeong in Jeongseon-Taebaek. We’ve personally checked out these special wild flower colonies.

The peak, which sits at an altitude of 1164 meters (3,815 feet), is shaped like the belly of a prone bear. In Korean, gombae means the belly of a bear. This location is filled with rare wild flowers and medicinal herbs all year. They were designated as forest resources to be protected by the Korea Forest Service in 1987.

The Korea Forest Service (www.forest.go.kr) accepts applications on the 20th of every month for tours during the following month.

Only 200 people may attend each day.

“We are trying to preserve the paradise as it is,” said Jeon Jeong-geum, a forest trail guide at Inje Management Center of National Forests. The trail is closed on Mondays and Tuesdays and on days with bad weather.

On our recent visit, we came across a valley on the left and a colony of wild flowers on the right. Broad-leaf trees created a lot of shade. There was also Gangseon Village, with cozy-looking houses and picturesque farms. It is possible to rent rooms in these homes, and they also sell makgeolli (traditional rice wine) and jeon (Korean-style pancakes). 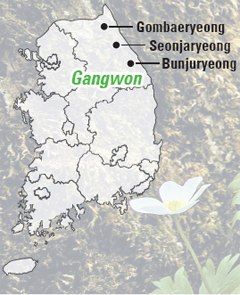 The closer you get to the peak, the steeper and curvier the trail becomes. There aren’t any restrooms either. But the good part is that there are more and more wild flowers as the elevation increases. We came across the Hoeri Baram with its silver furry shape, the Satgat Namul in the shape of a spider and the Geumgang Aegi Nari in the shape of a star. These are all endangered species protected by the Ministry of Environment.

As we approached the peak, it became almost impossible to tell where one flower bed began and one ended. We reached the top at about 2 p.m. - roughly three and a half hours after starting. All visitors must finish by 4 p.m. (Inje Management Center of National Forests / 033-463-8166)

One of the charms of this 12-kilometer trail is that it is relatively flat, except the area near the peak. Also, part of the trail overlaps with another trail called Gangneung Baugil, which presents beautiful scenery with many windmills.

Along the sunny valleys was a small colony of violet-colored flowers.

“They are Large Primroses and bloom in early summer, when primroses begin to fall,” said Kim Nam-gil, a professional photographer who specializes in wild flowers. Having the word “large” in its name was odd, as the flower is about the size of a small coin. This alerted us to the fact that other wild flowers must be much smaller.

After about a kilometer, we came across the windmill trail. From there we followed the signs for Gangneung Baugil, and whenever we peeped through bushes, we came across wild flowers. It was amazing to see the Dark Pink Rubus Oldhamii as it bears strawberries in June. We also came across Hylomecon Vernalis Maxim that looked like a pear and Arisaema that resembled a green purse.

“Arisaema was also used as an ingredient for poison [in ancient times],” Kim said. “There are many wild plants that contain poison, so you should be cautious.”

Along the unobstructed view of ridges, we saw dozens of windmills. As we walked on the trail enjoying the view, we smelled something: it was the scent of lilies. As we peeped through bushes, we saw a hill packed with lillies. Just like the saying “Do not boast about your perfume in front of the lilies of the valley,” the scent was better than any luxury perfume.

After we ate lunch prepared in the shade of windmills, we got to the peak. We stopped by the observation deck and decided to come back. It was 3 p.m. when we arrived where we started, about six hours after we embarked on the journey.

Bunjuryeong, the 12.2-kilometer trail located between Jeongseon County and Taebaek in Gangwon, is famous among wild flower lovers. In fact, it is said that almost all wild flower species native to the peninsula can be found in Bunjuryeong.

The trail sits in an alpine region at an altitude of more than 1,000 meters, but it is not such a difficult walk. In 1993, part of the trail was designated as Korea’s first ecological conservation area. Recently, the regulations have gotten tougher. Only 300 people are allowed to walk the trail each day, and groups cannot exceed six people.

Wild flowers are not a rarity in Bunjuryeong. For instance, the endangered Disporum Ovale Ohwi is a common site here.

In Jeongseon and Taebaek, there are other wild flower trekking courses besides the Bunjuryeong trail. The 2.42-kilometer trail between Mount Hambaek (1,572 meters) and Mount Manhangjae (1,330 meters) is also filled with wild flowers. It’s car-friendly, so you can drive through if you aren’t the trekking type.

The area behind High1 Resort in Jeongseon - named Hwajeollyeong - is also famous for wild flowers. Hwajeollyeong itself means “picking flowers,” named for the fact that the women of Gangwon’s villages often picked flowers as they climbed over the ridge. The resort has created a trail where Koreans used to transport coal, calling it Sky Road. A 10-kilometer walk on the trail will end at Hwajeollyeong.

There is also a tour agency, Eco Healing Tour (ecohealingtour.com), that organizes two treks to Hwajeollyeong each weekend for 45,000 won ($40).