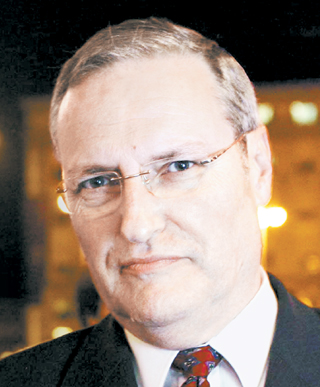 “Only governments can bring war criminals to justice, so the responsibility to do so is first and foremost that of the country whose nationals committed the war crimes,” says a man known as the “Last Nazi Hunter.”

“Although in certain instances it becomes the responsibility of the country whose nationals were the victims of the war crimes because the country of the perpetrators fails to fulfill this function.”

Efraim Zuroff, the 65-year-old U.S.-born director of the Simon Wiesenthal Center in Israel and coordinator of the center’s Nazi war crimes research worldwide, made these comments to the JoongAng Ilbo in a recent written interview. He said they apply not only to hunting down Nazi war criminals but any war criminals, including the Japanese.

Simon Wiesenthal (1908-2005), a Holocaust survivor from Austria, survived the Janowska concentration camp in Poland and dedicated his life after World War II to becoming the most renowned Nazi hunter as head of the Jewish Documentation Center in Israel. In 1977, the Los Angeles-headquartered Simon Wiesenthal Center was founded, although Wiesenthal himself only gave it his name and didn’t work for it.

The center is a nongovernmental organization financed primarily by private contributions with offices worldwide including New York, Paris and Buenos Aires.

Wiesenthal retired in his mid-90s after concluding there were no Nazis left to be prosecuted.

But in the ten years since then, the hunt is still on. Zuroff says that while 98 percent of Nazis are dead, the remaining 2 percent should be brought to justice.

“But the bottom line is that only governments can bring criminals to trial, so the final success is in their hands.”

Zuroff said they concerned him as well. While pointing out that not all Japanese are right-wing extremists, he said, “The only way to deal with these problems is for the leaders to tell the truth and teach the truth about the crimes committed by the Japanese during World War II.”

He added, “The only way that these problems will finally stop being a cause of hostility and justified resentment is for Japanese leaders not only to apologize but also to take measures to compensate the victims and begin a serious process of education at all levels regarding these terrible crimes.”

Since 1978, 14 of Japan’s highest-ranking war criminals were enshrined in the Yasukuni Shrine, which commemorates war heroes. Japanese politicians frequently pay respects at the shrine to whip up their right-wing bases, angering Korea, China and other countries that were victims of Japan’s wartimes aggression.

“It is Japan’s responsibility and in Japan’s interest to admit their guilt, uncover the crimes and bring the guilty to justice,” said Zuroff, “but if they haven’t done so, Korea should be doing as much as it can to press the Japanese on these issues and to preserve the history of this dark period, which is so important for the Korean nation.”

Thus, is the “duty of Korean government” to collect information about these crimes and the testimonies of the survivors and record them for posterity’s sake, he said.

He suggested to “establish a national remembrance authority with a museum to collect the documents and testimonies of the crimes, help educate Korean society about them, and serve as a lobby to press the Japanese to do what they should do.”

“We Jews have a lot of experience in this field which we can share with you,” he said.

A New Yorker, Zuroff’s dream growing up was to be “the first religious Jew to play in the NBA.”

Always interested in Jewish history and the Holocaust, he completed a doctorate in the subject.

When the U.S. began searching for Nazi war criminals, he volunteered to help in the effort. Fortuitously, he also met with the famous Nazi hunter Simon Wiesenthal.

Unlike the police, who start with a crime and then try to determine who committed it, Nazi hunters can’t work that way, since about 98 percent of the war criminals from World War II are already dead.

They don’t look for crimes, but for criminals who may be alive. “We have to start with tips from informants about people still alive and healthy enough to be put on trial?whom they suspect of being Nazi war criminals.”

Zuroff describes his job a being a one-third detective, one-third historian to find the evidence and one-third political activist or lobbyist to convince a government to prosecute a criminal.

Many countries lack the will to prosecute war criminals, but Zuroff compares a 90-year-old Nazi to a serial killer. “If a serial killer were on the loose anywhere in the civilized world, the authorities would be trying very hard to catch him.”

His biggest claim to fame was helping to track down Dinko Sakic (1921-2008), the commandant of the notorious Croatian concentration camp Jasenovac, where at least about 100,000 civilians were murdered.

Zuroff’s greatest regret is not being able to prosecute Aribert Heim (1914-1992), known as “Dr. Death,” a Nazi doctor who served in the Mauthausen concentration camp and “a notorious sadist who murdered inmates by injecting gasoline into their hearts, among other atrocities.”

“Operation: Last Chance,” the Simon Wiesenthal Center joint project to bring Nazi war criminals to justice and fight against Holocaust denials and distortions, which offers rewards of up to $25,000 for information, can be found at the Web site:www.operationlastchance.org