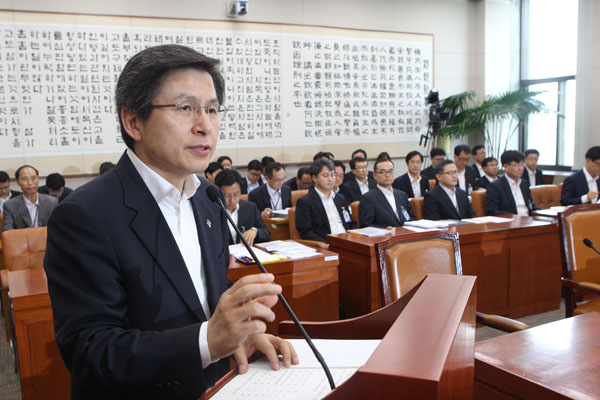 During the session, Representative Park Beom-kye claimed that Kwon Young-se, who headed the situation team of the Saenuri candidate Park’s presidential campaign, was behind Kim’s premature announcement of a police probe into the alleged politicking by the NIS three days before the presidential election.

After investigating suspicions that the NIS operated an online smear campaign against opposition candidate Moon Jae-in, the prosecution indicted Won last week for an election law violation as well as breach of the agency’s code of conduct, which required political neutrality.

Kim, who headed the Seoul Metropolitan Police Agency at the time of the Dec. 19, 2012 presidential election, was also indicted on charges of having interfered with a police probe to hush up the high-profile scandal.

After the Democrats made their first accusations against the NIS, the police conducted an initial probe and announced around 11 p.m. on Dec. 16, 2012 that the investigation found no grounds to substantiate the allegation.

Park won the election three days later, and the police announced on Jan. 3, 2013 that it found evidence that an NIS agent had been involved in the online smear campaign.

“We received reports that, with Seoul police chief Kim at the center, Kwon and Park Won-dong, then a senior NIS official, had multiple telephone conversations on Dec. 16,” said Representative Park. “We must lay bare the truth about this situation.”

The DP lawmaker also said Kim Moo-sung, then the head of Park’s campaign, told reporters in the afternoon of Dec. 16 that he was receiving information that the police found no evidence to tie the NIS to the smear campaign in their preliminary probe.

“And at 10:40 p.m., Park Sun-kyu, then campaign headquarters spokesman, said the probe outcome will be announced before the end of the day because it was a high-profile matter,” he said. “Twenty minutes later, the initial police probe was announced to clear the alleged NIS agent.”

Representative Park also said it was conspicuous that Kim and Kwon had both worked at the National Intelligence Service. He said without trusting someone powerful, Won and Kim would have not committed the alleged crimes, accusing Kwon as the mastermind.

The DP lawmaker then claimed that if the police had made a proper announcement, Moon would have won the presidency.

Justice Minister Hwang responded yesterday to the accusations by saying that the prosecution conducted a thorough investigation with no political consideration into the case.

Hwang was also criticized earlier by the opposition party for having interfered with the prosecutors’ probe into the case.

Through his public affairs officer, Kwon, currently serving as Korea’s ambassador to China, said the DP lawmaker was making a groundless accusation against him.

“As an ambassador, I have no intention to respond to every single political claim,” he said. “I will focus on my pending task, which is preparing for President Park’s trip to China.”

The Democratic Party also pressured the Saenuri Party to accept its demand for the National Assembly’s independent probe into the scandal. The ruling party said yesterday that the prosecution has gone too far to indict the former NIS chief with the election law violation.

They said the prosecutors stretched the law too far to apply election law violation charges to the NIS’s legitimate online psychological operation against North Korea.

The Democrats’ strong attacks came as its defeated candidate, Moon, made a rare comment on the scandal.

During his meeting with reporters on Sunday, Moon did not hide his anger over the NIS’s alleged attempts to stop his chances in the presidential election and the police’s distorted announcement of its initial probe.

“It was an unfortunate incident, but it is still an important opportunity to reform the NIS and the police, and I hope the Park administration properly acts on the opportunity,” Moon said.

He also said he thinks Park must take responsibility, but that it is inappropriate to hold her accountable at this point.

“If Park allows this case to be investigated thoroughly and sternly and reform the NIS and police, then that should be seen as fulfilling her responsibility,” he said.

The Blue House tried to keep its distance from the scandal.

A senior official said on Sunday that reform at the NIS had already begun when Park appointed a new chief. “Park had a strong will to reform the NIS before the scandal emerged or Moon urged the reform,” he said.