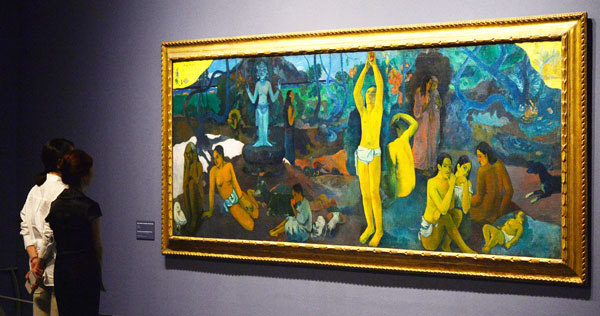 Visitors gaze at Paul Gauguin’s monumental painting “Where Do We Come From? What Are We? Where Are We Going?” (1897-1898), displayed at the Seoul Museum of Art in central Seoul. [NEWSIS]

Though both were created by post-Impressionist artist Paul Gauguin (1848-1903), it is rare to see “The Yellow Christ” and “The Portrait of the Artist with the Yellow Christ” together. The former is possessed by a museum in Buffalo, New York, while the latter is in Paris. But now visitors to the Seoul Museum of Art in central Seoul can see them side by side.

The two pieces are part of “Gauguin: Voyage into the Myth and After,” the first-ever retrospective of the legendary painter in Korea.

The scale of the exhibition, which started on Friday, is not overwhelming with about 60 paintings, sculptures and wood prints. But it shows several paintings considered to be especially important in Gauguin’s oeuvre. One of them is “Where Do We Come From? What Are We? Where Are We Going?” the highlight of the show.

The exhibition is roughly divided into four parts. It starts with Gauguin’s Brittany period, considered by art historians to be as important as his well-known Tahiti period, while his early Impressionist days come later.

The first work of the room for the Brittany period is “The Vision after the Sermon” (1888), regarded as a heavyweight in modern art history.

“The painting and other works in this room show Gauguin’s shift away from Impressionism and the beginning of Symbolism and Synthetism,” explained Seo Soun-jou, who directs the exhibition.

The painting combines an everyday scene of a peasant woman leaving church and the religious vision of Jacob wrestling with an angel from an episode in the Book of Genesis, which seems to have been the sermon of the day.

And all these elements are depicted in two-dimensional flat areas of color in bold contrast without any effort to create a three-dimensional effect though shading and perspective.

“Portrait of the Artist with the Yellow Christ”(1890-1891), left, and “Vision after the Sermon” (1888), made during Paul Gauguin’s Brittany period, are also on display. Scottish National Gallery, Edinburgh and Musee d’Orsay, Paris / The Bridgeman Art Library

“So, Gauguin had great influence on Expressionists and Fauvists such as Henri Matisse, who expressed their emotions and ideas through colors and forms,” Seo said.

The Brittany period exhibit also includes Gauguin’s “The Yellow Christ” (1889), which has a theme consistent with “The Vision after the Sermon,” and a self-portrait that shows “The Yellow Christ” behind the artist. Looking around the room, viewers can feel that the artist’s signature style has already emerged in Brittany, even before his time on the French Polynesian island of Tahiti.

The next room shows the exotic paintings of Gauguin’s Tahiti period, including the famous “Tahitian Women on the Beach” (1891). The painting shows calm meditation rather than “primitive energy,” which the artist sought when he left behind the industrial civilization of Europe in 1891.

“When he arrived, he discovered the island tarnished and the natives lethargic under French colonialism,” Seo explained. Still, some other paintings in this room show a peaceful, tropical Arcadia with golden sunlight and plants of pure colors.

The next room is dedicated to the exhibition’s highlight, “Where Do We .?.?.”(1897-8), which Gauguin intended to be his “last word” in the Tahiti period. He attempted suicide after finishing the work but failed. The 3.7-meter (12-foot) work is his largest.

“This masterpiece holds the key to understanding Gauguin’s art, implicitly containing his view of life, the world and the universe by expressing phrases of human destiny from birth to death,” Seo said.

The room also has detailed explanations about the iconography of the painting with symbols that include the traditional and ambiguous. In addition, there are smaller paintings made later with motifs from “Where Do We...”

“While displayed at the Museum of Fine Arts, Boston for 50 years, ‘Where Do We .?.?.’ could be sent on exhibit out of Boston three times, including this show,” Seo proudly said. “It took three years to get the piece here.”

But Seo did say he wished for a larger exhibition, perhaps with about 10 more paintings. But some museums withdrew their promise to loan pieces amid the heightened tensions between the two Koreas earlier this year.

Seo also directed the 2007 and 2012 van Gogh exhibitions and the 2011 Marc Chagall retrospective, which were great hits.