Couples say ‘We do’ to creating own traditions

Couples say ‘We do’ to creating own traditions

Instead of a shiny tiara, the bride sported a black jokduri (a bride’s headpiece for a traditional Korean wedding) decorated with red, green and yellow gems. Replacing the blush were yeonji gonji (red circles) on her cheeks - one on each cheek. And instead of a long, white gown, she wore a hanbok (traditional Korean garment) that consists of a light green top with gold jacquard-like patterns and a coral skirt.

The bride is Kim So-hyang, a 30-year-old web producer at a Korean media institution.

“I didn’t want my wedding to be one of those cookie-cutter ceremonies at Korean wedding halls,” she told the Korea JoongAng Daily, on the eve of her wedding on June 9. “Everything in today’s world is moving so fast and is highly competitive, and Korean weddings have also become speedy and all about who spent how much on what. But my fiancee and I wanted to do this [the wedding] slow yet in a right Korean way.”

Kim and her fiancee - Kim Yeong-jun, an oriental medicine professional - tied the knot at the Korea House, a complex of beautiful hanok (traditional Korean building), in Jung District, central Seoul, near Namsangol Hanok Village in Mount Namsan. It is one of several places in Seoul that offer sophisticated traditional weddings. “Plus, tuxedo and gown didn’t look that fabulous to us anyway. We liked durumagi [traditional overcoat] and hwalot [traditional wedding gown] better,” Kim said.

Wedding ceremonies in Korea have emerged as a major social problem in Korea in recent years, as they force people to spend huge sums of money for formalities.

Last year, the Chosun Ilbo ran a long-term series titled, “Wedding March at the Cost of Parents’ Tears” reporting on the problems of Korean weddings. They introduced extreme cases in which parents would sell the assets they accumulated over their entire lives to give their children the wedding of their dreams.

According to the National Human Rights Commission, Koreans spent an average of 17.22 million won ($15,192) on ceremonies alone in 2012. Some other polls say that the figure surpasses 20 million won.

This has prompted the former prime minister of Korea, Kim Hwang-sik, to call on the Korean people to re-think the country’s excessive spending on the wedding process as well as a wedding culture that is “show-offish and wasteful.”

“The government is doing what it can to reduce empty and vain formalities,” he said in April 2012. “But that’s not enough. The people, the society, religious groups and mass media must all put their heads together to ponder ways to improve Korea’s wedding culture.”

There have been attempts to lessen the burden of wedding costs. For starters, the government has been offering more affordable ceremonies at places like the New Seoul City Hall, the National Library of Korea and even a part of the Blue House. One of those attempts is a traditional wedding. 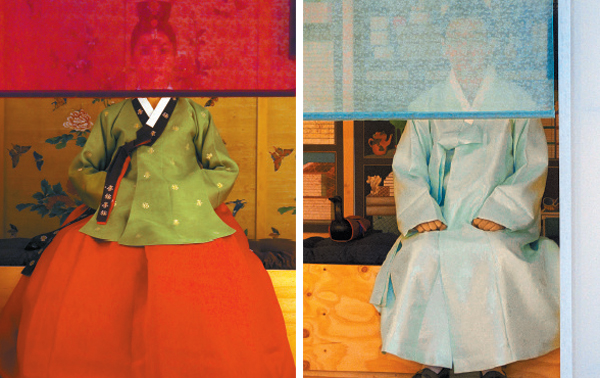 The bride and the groom wait in separate quarters behind a screen for the ceremonies to start. Provided by Arumjigi

Lee Mi-kyung, a wedding manager at the Korea House, said that whereas before, it was usually Korean-foreigner couples that were the majority of traditional wedding clients, these days it’s mostly young Korean-Korean couples.

It may sound strange to some that Koreans consider Korean weddings as “special,” but this is because Western-style weddings have almost entirely replaced traditional weddings since the country’s modernization and globalization.

“We wanted a wedding that is different from others, and something that people would remember for a long time,” said Shin Hye-seong, 36, who got married in a traditional ceremony at the New Seoul City Hall in central Seoul on May 25. “We liked it because we could together make the wedding in the formats and colors of our choices,” said Shin’s husband, Lee Min-su, who is the same age.

The Seoul Metropolitan Government has been providing the ground and basement floors of the New Seoul City Hall - which opened in September 2012 after three years of renovation - as a venue for affordable weddings since early this year. The move was part of its campaign dubbed, “Together, making small and meaningful wedding ceremonies.”

For such a new experiment at the New Seoul City Hall, officials of the Seoul Metropolitan Government sought help from the Arumjigi Culture Keeper’s Foundation, a nonprofit organization devoted to preserving Korean traditions. Arumjigi formed a group of advisers who are experts in various sectors and studied the “modern model” of the Korean traditional wedding ceremony.

Instead of classical music, traditional Korean percussion instruments played in the hallway. Instead of colorful flowers adorning the stage, a clean, red mat covered it.

“We will now start the wedding of Lee Min-su and Shin Hye-seong,” presider Ahn Yi-ho proclaimed. He also briefly walked people through the upcoming programs, so that even the guests who were not familiar with a traditional wedding can enjoy it.

In traditional weddings, the presider - or the host - must be a respected elder in the household or neighborhood. But at the Lee-Shin wedding, a singer of pansori (traditional narrative singing), took on the role. He also spoke in plain Korean, with less use of the ancient language that consists of Chinese letters, which the younger Korean generation is not familiar with.

The bride made her entrance. The bride and the bridegroom stood facing each other. The helper assisted them with washing their hands, a process meant to cleanse their body and mind before the ceremony.

“This step, called hapgeullye, can be considered the highlight of the traditional Korean wedding as it symbolizes the two becoming one,” Lee Mi-kyung said.

The 30-minute wedding was followed by a congratulatory performance of pansori by Ahn; then pyebaek, a traditional ceremony to pay respect to the parents and family members by the newlyweds; and the bridal feast.

(Far left) The wedding of Kim Yeong-jun and Kim So-hyang at the Korea House on June 9. By Moon So-young: (Group of photos on the right) First row: the table for a traditional wedding; a wild goose represents a happy marriage for a century. Second row: the bride and groom drink, which represents the two becoming one. Third row: the bride pays respect to the groom’s parents after the wedding; food at the bridal feast is simplified Korean food. Provided by Arumjigi

Somewhere between traditional and modern

Compared to the Lee-Shin wedding at the New Seoul City Hall on May 25, the wedding of Kim Yeong-jun and Kim So-hyang at the Korea House on June 9 was much truer to the original format of a traditional wedding.

There was the “Goose Father”; all three bows were exchanged between the two; and the bride and groom wore all traditional, formal wedding gowns, whereas Lee Min-su and Shin Hye-seong decided they wanted hanbok worn in their daily lives. So groom Lee had no hat and an oversized belt, while the bride Shin had fewer hair decorations.

Also, the host at the Kim-Kim wedding at the Korea House - who has been presiding over traditional weddings at the Korea House for about 20 years - introduced each program in the ancient language that consists of Chinese letters, without modern explanation, which made it harder for average people to understand what was going on.

“As much as I loved the traditional wardrobe and the music, I couldn’t understand at all what each process was supposed to mean,” said one of the guests, Kim Seo-yeon, a 25-year-old teacher. “The two were continuously engaged in formalities, but I wasn’t sure what they were doing.”

The Korea House wedding did have some modern elements, though. For instance, the rooster and the hen kept under the table - one wrapped in blue, the other in red - were fake. Lee Mi-kyung said they made the modification several years ago during a bird flu scare. Also, after the 30-minute ceremony - which is shorter than original format of traditional weddings, that last about an hour - there was a photo session and bouquet-throwing to someone about to be married.

“A wedding is something that continues to evolve according to the times and the regions,” said Jo Hyo-suk, an expert in traditional wardrobe who advised the Lee-Shin wedding at the New Seoul City Hall.

Go Jeong-a, the cultural and planning manager at Arumjigi, agrees: “Times are changing, so we concluded that while keeping the traditional framework, we allow the bride and the groom to tweak here and there in line with modern elements.” She added that “this is just one suggested model, and we plan to continuously supplement and improve.”

The bride Kim So-hyang, who is now in Spain for her honeymoon, agrees on the difficulty and the room for improvement. “The entire process and the terminologies were all very difficult. Different regions had different customs. We weren’t familiar with Chinese letters. Even our parents’ generation wasn’t familiar with this kind of wedding,” she said. “I hope there were more education done on young Koreans on the process and meaning of a traditional Korean wedding.”