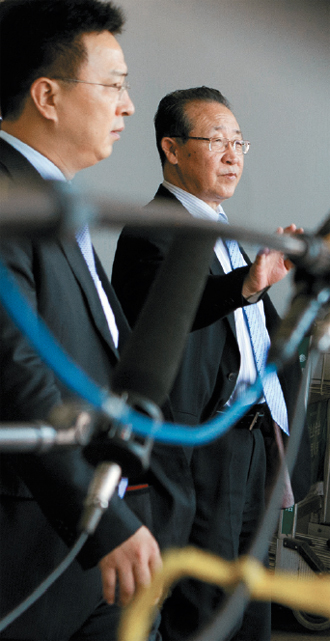 A top North Korean nuclear negotiator is scheduled to meet with his Chinese counterpart in Beijing today to discuss bilateral relations and the situation on the Korean Peninsula, the latest in Pyongyang’s diplomatic outreach attempts.

Veteran diplomat Kim Kye-gwan, first vice minister of the Ministry of Foreign Affairs, will meet with Chinese Vice Foreign Minister Zhang Yesui, said Chinese Foreign Ministry spokeswoman Hua Chunying in Beijing Monday for “a thorough exchange about the bilateral relationship and the state of affairs on the Korean Peninsula” as well as other bilateral and international concerns. Kim arrived in Beijing yesterday.

The exchange comes after high-level talks between the North and South were abruptly canceled last week and the United States gave a chilly response to the North’s proposals of bilateral talks Sunday.

The meeting is part of a flurry of North Korean diplomatic attempts after months of provocations and threats including its third nuclear test in February. Last month, Vice Marshal Choe Ryong-hae met President Xi Jinping in Beijing.

Some South Korean analysts suspect Kim Kye-gwan may head to Russia after Beijing.

South Korean Ministry of Foreign Affairs spokesman Cho Tai-young told reporters yesterday at a press briefing, “There has been no official confirmation from Russia” regarding Vice Minister Kim visiting.

Russia sees North Korean leader Kim Jong-un’s offering of talks with the U.S. as a step towards resuming the long-stalled six-party talks. Alexander Lukashevich, Russian Foreign Ministry spokesman, told reporters in Moscow Monday that the latest movement “may be a new dynamic that could help to unfreeze the six-party talks process.”

Lukashevich added that the gestures from North Korea “signal that conditions are ripening for delayed dialogues to move forward.”

The bilateral meeting between the vice ministers of China and North Korea coincides with a gathering of six-party talks envoys from the U.S., Japan and South Korea today in Washington.

Asked by a reporter whether the trilateral talks are an extension of the dialogue thus far or a response to North Korea’s recent proposals to talk with South Korea and the U.S., South Korea’s Cho Tae-yong, the new special representative for Korean Peninsula peace and security affairs, said: “Both, I think.”

Cho will meet his U.S. and Japanese counterparts Glyn Davies and Shinsuke Sugiyama in Washington for the first time since he took his post.

“There have been talks between the six party envoys of South Korea, Japan and the U.S., and they have adjusted their schedules,” Cho said yesterday. “The movement surrounding North Korea right now makes it an appropriate time for these talks.”

On Friday, Cho is expected to stop in Beijing before returning to Seoul, according to South Korean Foreign Ministry officials. President Park Geun-hye next week will hold her first summit with Chinese President Xi Jinping. North Korea indicated a willingness to return to six party talks as it proposed dialogue with the United States. But U.S. State Department spokeswoman Jen Psaki said Monday talks would be possible only after the North takes “credible steps toward concrete denuclearization.”