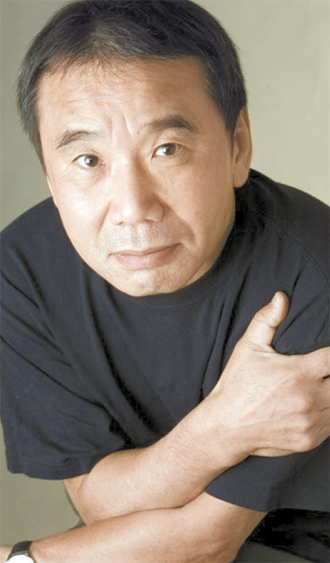 While homegrown authors like Shin Kyun-sook and Gong Ji-young can expect an advance of 100 million won ($88,450) for their books, foreigners are able to pocket much more.

Take Haruki Murakami, for example. The 64-year-old Japanese writer’s upcoming novel “Colorless Tsukuru Tazaki and His Years of Pilgrimage” has set a new record for the highest advance royalties paid to an author. The amount is reportedly more than 1.6 billion won.

Although the publisher Minumsa refused to disclose the exact amount it paid to secure Murakami’s novel, which will hit shelves on July 1, it did say, “we know that there was a company that offered 1.6 billion won but was refused.”

Advance royalties tell an author that “we can guarantee at least this much in sales,” according to the company, and marks a writer as a star.

The first such payment was made when Allan Folsom’s pocketed a cool $200,000 before “The Day After Tomorrow” was released. Since then, reputable writers come with a hefty advance price tag.

Murakami is a prime example of this trend. In the mid-90s Murakami’s “Wind-up Bird Chronicle” landed the famed writer an advance of $15,000.

Then in 2002, Murakami claimed 20 times more for “Kafka on The Shore.” Munhakdongne Publishing also forked over a billion won to secure the publishing rights.

And Murakami isn’t the only one. In 2009, Dan Brown’s “The Lost Symbol” was snapped up for more than 1.1 billion won and last year, J.K. Rowling’s “The Casual Vacancy” made more than a billion won for the British writer before print.

On the other hand, Korean writers are rarely presented with such offers. Shin Kyung-sook, Gong Ji-young, Kim Hoon, Hwang Seok-young, dubbed the “Big Four,” are given roughly 100 million won in advance royalties at most. Other notable authors are given around 30 million to 50 million won.

“Because sometimes Korean authors take a long time to finish writing, the advance payment is more like a down payment,” one publishing company said.

But from a publisher’s point of view, advances are a risky venture. If a book doesn’t sell as much as was hoped, the company will be hit hard. For Minumsa to cover the advance cost for Murakami’s latest novel, it must sell more than a million copies.

The company that published Brown’s “The Lost Symbol” and Rowling’s “The Casual Vacancy” suffered financial setbacks from the premature advance payments. But of course, it can also turn out great. Murakami’s “1Q84” sold more than two million copies, no doubt leaving the publisher with some change in its pocket.

Overseas, this phenomenon is also prevalent. In 2003, Simon & Schuster paid Hillary Clinton some $8 million for the rights to publish her autobiography.

Within a week, more than 60 percent of copies from the first print run, meaning the company comfortably won back the advance.

In the end, winning the rights to publish a big-name author’s book is a battle among giants. The company with more money is bound to win and then win again with book sales.

Competition among publishers and the secrecy surrounding advance payments continues to push authors to up the ante. The fact that foreign writers often don’t take Korean publishers seriously is another reason that the amount keeps rising.

The fierce competition brought by international writers has sparked growing concern about distortion in the marketplace.

The answer lies in variety and small-batch publishing, according to Han Ki-ho, head of Korean Publishing Market Research Institute.

But, unfortunately, many publishing companies believe that getting that one big shot will give an important competitive edge.