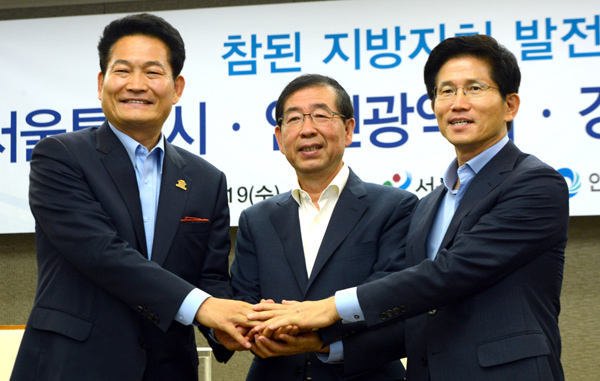 The mayors of Seoul and Incheon and the Gyeonggi governor yesterday demanded the central government increase its financial support for the new, free day care programs, saying they can’t afford the bills.

They urged the government revise laws to give more subsidies to local governments and said they will ask President Park Geun-hye to meet with them if their demands aren’t satisfied soon.

That bill requires the central government to support 40 percent of Seoul’s total budget for free day care programs, up from the current 20 percent, and to support 70 percent of the budget for Gyeonggi and Incheon.

They also demanded the central government release a 560 billion won subsidy that is already included in the country’s budget for this year.

“We agreed to meet the president to explain to her how serious a problem this is for local governments,” Seoul Mayor Park said at the press conference.

They accused the Legislation and Judiciary Committee of dereliction of duty because the bill had already been approved by the Health and Welfare Committee.

“The Legislation and Judiciary Committee should take care of the issue as soon as possible because most of the local governments are in serious financial trouble,” Incheon Mayor Song said.

“Those local governments failed to drum up the necessary budget in time though the plan was announced last December,” said Lee Sang-jin, the director of the Childcare Planning Division of the Ministry of Health and Welfare.