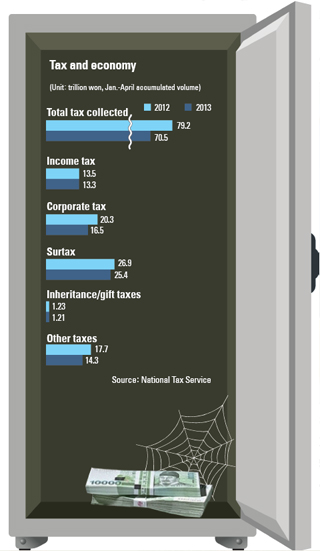 A 60-year-old surnamed Park with about 1.5 billion won ($1.3 million) in assets recently decided not to pass on his property to his children. “I thought to myself that the economy is down and if I break up my property, I wouldn’t be able to prepare fully for financial emergencies,” he said, adding that he also would have to pay taxes on the gift.

The number of people like Park is increasing, along with concerns about the effect on Korea’s economy.

“In times of economic difficulty, many people hold on to property instead of giving it to their children,” says Hwang Jae-kyu, a tax accountant at Shinhan Bank.

Not only are Koreans holding on to their assets, they are spending less, which means less tax revenue for the government.

A 38-year-old homemaker surnamed Kwon hardly uses her credit card when she goes grocery shopping. To cut down on expenses, she started buying at traditional markets instead of large chain supermarkets because she usually receives discounts for paying in cash.

“I feel the store owner is trying to avoid paying taxes, but still, I pay in cash because that way I can save a lot,” Kwon said. “Even if I use credit cards, I try to cut down on unnecessary purchases and buy items at stores that give discounts and coupons.”

It doesn’t mean, however, that the Kwon family’s income has dropped this year. Rather, the family is cutting down on spending because they are “concerned.”

With more families like Kwon’s tightening their belts, credit card spending last month grew at its lowest rate since January 2012.

According to the Credit Finance Association, in May, a total of 38.6 trillion won was spent using credit cards, which is up 2.4 percent compared to the previous year.

In a rare move, the NTS said during a policy briefing for National Assembly lawmakers, “it will be extremely difficult for us to secure the tax [forecast] this year.”

The decline in tax collection reflects the flow of the domestic economy. Company profit has plunged and household consumption is lacking. There also are fewer transfers of properties.

The amount of corporate tax paid by companies has also dropped. From January to April this year, the NTS collected 16.5 trillion won in corporate tax, or 36 percent of its goal down from 44.2 percent of the 2012 goal collected at the same time last year.

Corporate tax dropped because companies are making less profit due to difficult business conditions at home and abroad, and experts say the situation will only worsen.

And just like individuals, companies are spending less out of concern that economic conditions will further deteriorate.

Changes also are seen in the amount of inheritance and gift taxes collected.

According to industry sources, those with 2 billion won or less in assets are reluctant to pass on their wealth to families, whereas wealthier people have turned more aggressive.

For example, a 55-year-old surnamed Kim, who is vice president at a large company in Korea, recently passed on one of his two apartments in Bundang, Gyeonggi, to his son. The value of the 100-square-meter apartment in Bundang had once reached 900 million won, but at present it is 600 million won.

“I decided to give the apartment to my son when the price is down, thinking that I would pay less gift tax,” said Kim.

If Kim gave his apartment to his son when it was worth 900 million won, he would have paid 200 million won in gift tax. But with the fallen value, he paid half that.