Treasures from Silla Dynasty to get first exhibition in U.S.

Treasures from Silla Dynasty to get first exhibition in U.S. 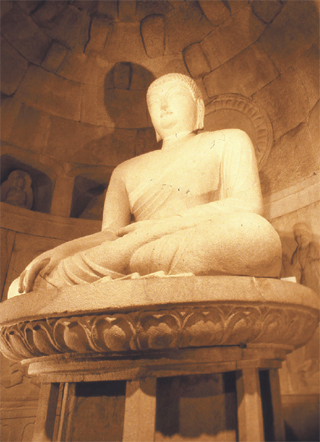 Seokguram Grotto, an 8th-century artificial stone cave, is one of Silla’s most well-known cultural properties. The cave will be shown in a video at the exhibition.

More people from across the globe will get to experience Korea’s ancient dynasty of Silla (57 BC-AD 935) come this fall, when the Metropolitan Museum of Art in New York holds a special exhibition on the dynasty.

The Met will be the first Western museum to have an exhibition dedicated solely to the Silla Dynasty, which is most well-known for its artistic and cultural freedom and achievement as well as its broad international ties and deep Buddhist faith. When Koreans think of Silla, sumptuous gold accessories and explicitly-portrayed clay dolls are the first things that pop into their heads.

Titled “Silla: Korea’s Golden Kingdom,” the exhibition will feature some 100 objects from the era between Nov. 4 and Feb. 23, the museum told Korean correspondents in New York in early June. The exhibition was organized in collaboration with the National Museum of Korea and Gyeongju National Museum, Korea, where the most precious treasures from Silla are kept.

Thomas P. Campbell, the director and CEO of the Metropolitan Museum of Art, told Korean correspondents that Silla is less known to the West compared to other Korean dynasties, like the Joseon and Goryeo, and that he wanted to introduce the splendid art of Silla to Western people.

Campbell - who became the ninth director of the museum in January 2009 - said he was enthralled by Seokguram Grotto, an 8th-century artificial stone cave that contains Buddha’s statues and rock art, when he visited Gyeongju, North Gyeongsang last year. The grotto is also a state-designated national treasure and Unesco World Cultural Heritage Site. And Gyeongju - about a 4-hour drive south of Seoul - was the capital of Silla.

Campbell reminisced at the press conference how he went into the grotto at night after the public viewing and there was a crescent moon, adding that the experience for him was quite poetic and memorable. 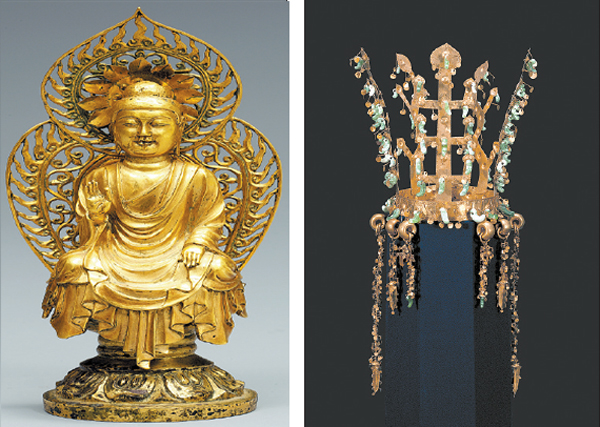 How the idea started

The idea for a special exhibition on Silla at the Metropolitan Museum of Art surfaced when Denise Leidy, a curator at the museum’s Department of Asian Art, visited Gyeongju in 2008. The Gyeongju National Museum, Korea made the suggestion to Leidy.

Although it didn’t materialize right away, Korea once again made an impression on the Met in 2009. After Campbell became the director of the museum, he visited Korea. During the visit he met with President Park Geun-hye, who was then a representative of the Grand National Party, the predecessor of the ruling Saenuri Party.

The meeting was reportedly a request by the Met, after hearing that Park played a leading role in getting a bill passed at the National Assembly that is designed to create a 500 billion won ($432 million) fund to manage and prevent damage of the country’s cultural properties.

Media reports said that at that meeting Park noted that the size of the Arts of Korea Gallery at the museum is too small. Responding to her remarks, Campbell reportedly told her that the Met will work to let the visitors learn about Korean culture and arts by holding special exhibitions on a steady basis.

The Arts of Korea Gallery at the Met was established in 1998, and the collection there ranges from about the 4th century B.C. to the present day. Key exhibits include an exquisite 7th-century gilt-bronze pensive Bodhisattva; 14th-century Buddhist paintings; Goryeo celadon pieces as well as 16th-century landscape and literati paintings.

It is true that although the Met has held a number of exhibitions on artifacts from ancient China and Japan, there wasn’t many on ancient Korea - much less an exhibition dedicated solely to one dynasty. 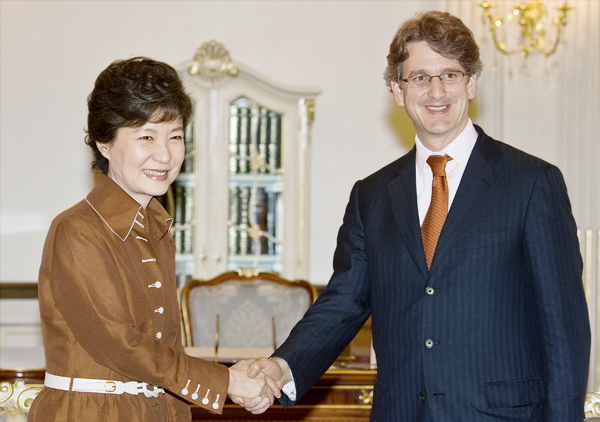 “The first-ever exhibition in the West to focus exclusively on the art of Silla will go on view at the Metropolitan Museum of Art,” the museum explained in its Web site. “[The exhibition includes] spectacular gold regalia, exquisite Buddhist art and exotic goods from the Silk Road, all created between about 400 and 800 A.D. The works on view will include designated National Treasures, as well as many objects that are being shown in the U.S. for the first time.”

The “Silla: Korea’s Golden Kingdom” exhibition at the Metropolitan Museum of Art will be divided into three parts.

The first part will showcase treasures discovered in the 5th- and 6th-century tombs of royalty and the elites, including the Great Tomb of Hwangnam, the largest Silla burial tomb. This will be where the visitors will see the gorgeous gold crown that Silla is famous for.


The second part will be dedicated to the international nature of Silla culture by featuring relics from Eurasia that are found in Silla burials. One of the famous relics most indicative of the international ties in Silla is the face beads that have a striking resemblance to the ones from the Eastern Mediterranean. There was a TV documentary on the face beads as well as an exhibition at the National Museum of Korea featuring them.

“If you look at the faces of the people portrayed on the Gilt Bronze Sarira Reliquary from the Unified Silla Period, you can see that they are not the faces of Koreans but foreigners,” said Jo Ji-yoon, curator of the Leeum, Samsung Museum of Art at the museum’s most recent exhibition titled “Opulence: Treasures of Korean Traditional Craft.” “This was because Silla was very active in exchanges with countries outside Korea.”

The last part will showcase Buddhist art. The religion was declared a state religion in 528 and with that, monks became a powerful group of people, temples became wealthier and Buddhist statues and art became more splendid and sumptuous. The Met explained that gold - which used to be used for royal objects - was then used for Buddhist art.

“We wanted to show that Silla was not just a small country in the Far East, but an ancient dynasty that had active exchanges with the Eurasian Continent through the Silk Road,” said Soyoung Lee, the associate curator of the museum’s department of Asian art.