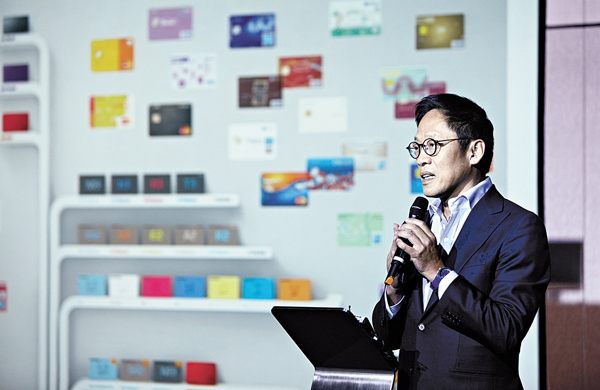 In celebration of its 10th anniversary, Hyundai Card will revamp its credit card portfolio by rolling out plastics largely in two types: one with reward points that can be redeemed for products and services and another one with a cash-back feature.

“For the past 10 years, Hyundai Card has sought bold and endless innovation,” Hyundai Card CEO Ted Chung said in a press conference at company headquarters in Yeouido, western Seoul.

“We created a new way to market credit cards by using the alphabet and numbers. I figure it’s time to move to the next level, where customers no longer have to worry about choosing among many cards and can just decide whether they want to get points or get discounts.”

Consumers using the X or X2 card can get up to 1 percent of the price of goods or services in cash back either as a discount at the time of purchase or through their bank accounts.

It is the third-largest credit card company after Shinhan and Samsung.