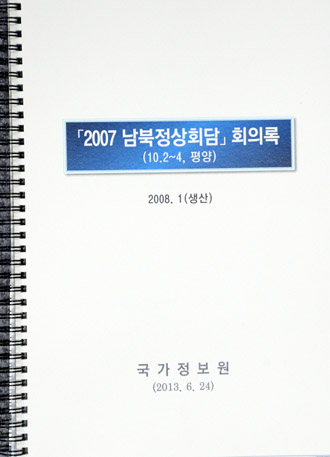 The cover page of the transcript the National Intelligence Service handed over to lawmakers yesterday. [NEWSIS]

South Korea’s spy agency yesterday declassified records of a secret dialogue at a 2007 summit in Pyongyang in which President Roh Moo-hyun told Kim Jong-il that he didn’t recognize the Northern Limit Line, the de facto maritime border between the North and South.

The National Intelligence Service had previously released a summary of the records to lawmakers on the National Assembly’s Intelligence Committee. Yesterday, it released the full transcript of the closed-door meeting on the sidelines of the inter-Korean summit to lawmakers.

As of press time, lawmakers did not show the media the full transcript. But Saenuri Party lawmakers did release the eight-page summary.

According to the summary, North Korea’s Kim proposed to Roh a joint fishery zone near the NLL, and Roh replied: “In regards to this matter, I have the same perception. The NLL must be changed.”

Roh said, “There is no legal or logical basis” to the legitimacy of the border but the border “is actually effective.

“For North Korean people, it could be a matter of their pride,” Roh said. “For the Southern side, we also have some people making territorial claims based on this border.”

Roh said some people in the south were “sensitive” to the NLL issue, “and their voices are really loud .?.?. So what we want to propose is to cover the current military map with a large map of peace and economy,” referring to a joint economic zone.

When Kim asked Roh if there was any resistance in the South to such a plan for a zone, Roh said, “There is no one in the South who opposes the idea of creating a peaceful cooperation zone in the Yellow Sea. If he did, he would become a fool on the Internet.”

When it came to North Korea’s nuclear weapons program, Roh made a shocking comment that he supported the North Korean position, according to the summary.

“I have fought against the U.S. over the North’s position on the matter of the nuclear weapons program,” Roh said. “At international venues, I have advocated the Northern side.”

Roh also urged Kim to resume the interrupted construction of two light-water reactors in North Korea, based on the 1994 Agreed Framework.

In terms of Pyongyang-Washington relations, Roh said “the biggest problem is the United States.

“I also have the perception that the imperialist history [of the U.S.] has never been apologized for and it shows its hegemonic ambition.”

The unprecedented decision by the spy agency to declassify the transcript followed a political feud between the ruling party and opposition over whether the late South Korean president, who died in 2009, actually disavowed the western maritime border drawn up after the 1950-53 Korean War, which North Korea has never accepted.

“Although the National Assembly’s Intelligence Committee saw summarized records of the summit on June 20, there has been constant controversy over whether the summary was distorted and manipulated [by the NIS],” an official statement released by the NIS said yesterday. “Both ruling and opposition parties are also strongly demanding the opening of all the records.”

The spy agency said it concluded that releasing the conversation between two deceased leaders would not affect current inter-Korean relations.

According to the NIS, the legal basis for the revelation is presidential decree No. 21214, Article 13, Section 2, Clause 2, which allows it to reclassify a state secret if “there is a request from the chief of the NIS.”

Last October, Chung Moon-hun, a Saenuri Party lawmaker, said that a transcript existed of a conversation between Roh and Kim at a closed-door meeting on the sidelines of the summit.

Chung said Roh described the border as “a line unilaterally drawn by the United States, which wanted to conquer more territory” and he went on to tell Kim, “South Korea won’t recognize the NLL anymore and all the disputes surrounding the line will be resolved if the two Koreas carry out some joint fishing activities.”

The political football died down after the December presidential elections and after the NIS refused to open the records to the public, despite persistent requests from the Saenuri Party.

The issue re-emerged Thursday when Suh Sang-kee, a ruling Saenuri lawmaker and head of the National Assembly’s Intelligence Committee, made the bombshell revelation that he requested records of the 2007 inter-Korean summit from the National Intelligence Service and the spy agency gave him an eight-page summary of the secret meeting, which he read with four other Saenuri lawmakers.

Immediately after the NIS announcement today, the NIS said it would hand over copies of the transcripts to both ruling and opposition lawmakers who are members of the National Assembly’s Intelligence Committee.

But lawmakers from the opposition Democratic Party refused to receive the documents because they suspected the spy agency could have distorted them to make Roh look bad. The DP is a descendent of Roh’s Uri Party.

“What the DP demands is not the document that the NIS has but the original transcript stored in the National Archives of Korea,” Representative Jung Chung-rae, a member of the Intelligence Committee, said yesterday.

In fact, after the 2007 summit, the South Korean government handed over a copy of the original transcript to the NIS, while storing the original version in the state-run archive.

Under the law, publicizing a NIS record with the second-highest security classification is possible if the chief of the agency orders it. But opening up a record in the state-run archive is harder, requiring approval from more than two-thirds of the lawmakers in the legislature.

Kim Hyun, another DP lawmaker, said the NIS is trying to divert public attention from an ongoing probe by prosecutors into its agents’ alleged attempt to sway the December presidential election.

“We express anger against the NIS as they are attempting to dilute the matter of the NIS meddling in the election campaign,” Kim said.

Democrats have raised questions over the legitimacy of the victory of President Park Geun-hye in the election with allegations that NIS agents posted comments online smearing the reputation of DP presidential contender Moon Jae-in.

Former NIS chief Won Sei-hoon has been indicted without detention on suspicion of directing the smear campaign, but the DP is calling for a legislative probe into the case separately from the prosecution.