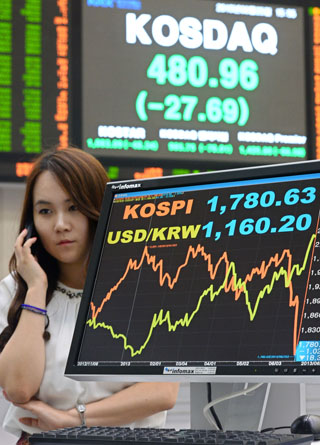 An employee at Korea Exchange in Yeouido, western Seoul, talks on the phone yesterday as the benchmark Kospi?fell to the lowest point this year at 1,780.63, a decline of 18.38 points from Monday. It was also at its lowest point since July 25, 2012, when it finished at 1,769.31. Meanwhile, Kosdaq, the nation’s tech-heavy junior bourse, also recorded its lowest close of the year yesterday at 480.96, 27.69 points lower than Monday. Local currency ended at 1,162.20 won against the U.S. Dollar. [NEWSIS]