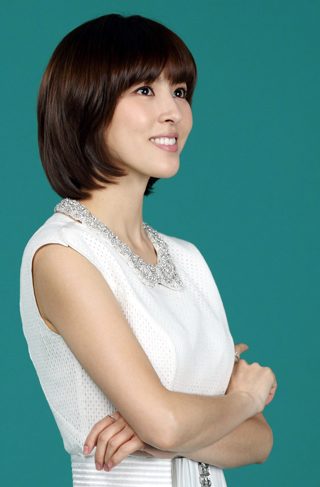 Actress Han Hye-jin has unveiled that she and Naul of Brown Eyed Soul broke up last summer, months before she started dating footballer Ki Sung-yeong.

“I haven’t seen him since last summer, and even before that, we were living [separate lives],” Han said on SBS talk show “Healing Camp” on Monday. “Close friends knew that the relationship was over.”

She is currently a host of the show but came on as a guest for a special program as she will be stepping down from her position soon.

She said that she avoided making any comments on her failed relationship because she didn’t want to negatively impact the film she needed to promote.

“At the moment [of the breakup], I was filming a movie, so I refrained from making the news official, but then reports started spreading in early December,” Han said.

About Naul making an appearance at the funeral of her father in November, she said he might have felt the need to come as he was already aware of her father’s illness.

“I dated him for a long time and I felt very thankful about that,” Han said.

She then moved on to the start of her new romance after her father’s funeral,

Ki made a call to Han afterward, and she recalled that the flowers sent by the footballer were especially impressive.

In the prerecorded video message, Ki said he felt sad when he spotted Han falling asleep during the filming of a show he attended as a guest in August.

He also said that he regrets asking for her advice when he had relationship problems before he fell for her as she now makes fun of him for those incidents.

Then Ki showed up during the show in person holding a rose. He said “I love you” as he walked toward his fiance. Han showed tears of joy from his surprise visit.

Han and Ki participated in a wedding photo shoot on Monday, according to Han’s agency yesterday. It occurred just a week before their wedding on July 1 at the Intercontinental Hotel in Samseong-dong in southern Seoul.

The agency said that the couple will have a home in Seorae Village, southern Seoul, and another in the United Kingdom as Ki plays for Swansea City of the Premier League.