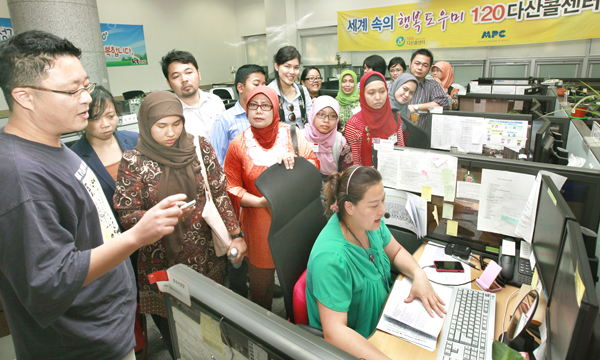 As Korea elected its first female president in December, countries have taken an interest in gender policies at the governmental, societal and corporate level in Korea.

The call center, which receives 34,888 calls daily as of March, was officially launched by Seoul in September 2007 to provide a free and convenient telephone service where citizens can ask a team of ready phone operators sitting at computers any questions regarding daily life issues or district office affairs.

Most of the 524 workers are women, and the call center is one example of how integrated information and communication technology services benefit the public.

“Illiteracy is a big problem in Indonesia,” said Erni Rachmawati, 50, head of delegation and the gender education division of the Women Empowerment Ministry. Rachmawati said that at the primary school level, girls are more literate than boys “because boys often have the burden of earning a living for their family.” But that changes at the secondary level as girls start a family at an early age and do not have an opportunity to pursue higher education.

According to the CIA World Factbook, the adult literacy rate, defined as those 15 and over who can read, in Indonesia is 90 percent, 87 percent for women. The Korean literacy rate is 98 percent.

Last week, the officials learned about the Gyeonggi Women’s Development Center and visited the Hwaseong U&I Center in Gyeonggi, which runs courses for women who quit work after having kids to help them train for and find jobs.

Other officials pointed out that Korea’s infrastructure, such as roads and bridges that connect rural areas to cities, public transportation which allows women, children and the disabled to commute safely, are admirable, especially as Indonesia is scattered into thousands of islands.

“The participants will also visit Yangdong Folk Village, an information network village in Gyeongju, North Gyeongsang, to see how rural areas established information centers with computers and Internet to help revitalize the rural community through e-commerce and tourism.”

Aram Rhee, a researcher with the Asia Pacific Women’s Information Network Center, said, “Back in 1996, when it was founded, the center’s target was mainly domestic, such as targeting women in Korea, educating housewives about information technology, and that spread to the Asia-Pacific region. Since then, we have spread all over the world, including Africa and even South America.”

In 1998, APWINC was appointed as a Unesco Chair Institution in Communication Technology for Women and works with governments and international organizations all over the world to empower women socially and economically through use information communication technology.