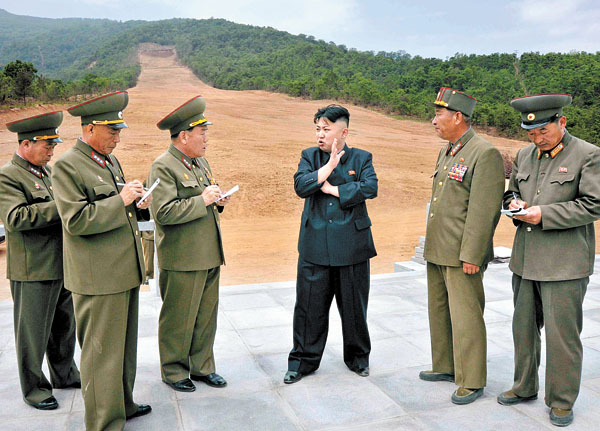 North Korean leader Kim Jong-un gives directions to officials at the construction site for a ski resort at Mount Masik, near Wonsan, on May 27. [NEWSIS]

North Korean leader Kim Jong-un has launched an ambitious plan to transform the strategically important city of Wonsan into a tourist destination, the JoongAng Ilbo confirmed.

According to a document entitled “General blueprint for the Wonsan District” obtained exclusively by the JoongAng Ilbo on Tuesday, North Korea is in the process of constructing three special districts in Wonsan: a financial district, an entertainment and sports area and a tourist destination.

The report says Kim is planning to develop Songdowon Beach in Wonsan into a holiday destination for summers and a ski resort on Mount Masik for winters. Mount Masik is about 20 kilometers (12.4 miles) from Wonsan.

Wonsan, a port city with a naval base, was one of the favorite vacation places of his father Kim Jong-il. Last month, his youngest son Jong-un stayed in Wonsan for about a week, right before his surprise proposal for inter-Korean dialogue with Seoul. Those talks were aborted at the last minute.

Sources in Seoul say the plan to develop the eastern naval city was actually his father’s.

In fact, in the transcript of the 2007 inter-Korean summit that was declassified Monday, Kim told former South Korean President Roh Moo-hyun that “Wonsan is a holiday destination,” rejecting Roh’s proposal to develop the city into an industrial park like the Kaesong Industrial Complex.

“Wonsan is a bay,” Kim said. “Waste comes into the bay and it can’t be properly managed because of Masik Mountain behind the city. So we will shut down all of the factories and shipyards in Wonsan right away.”

Sources said Jong-un might have decided to turn the city into a tourist resort based on the Kumgang resort, which was jointly run with the South but has been closed since July 2008.

“In Wonsan, there are a series of heavy industry factories, such as automobile plants and shipyards,” a source said. “But North Korea has a plan to close the aging factories and turn the city into a resort.”

Sources told the JoongAng Ilbo in March that North Korea appeared to have moved their MiG jet fighters from an airfield in Wonsan to a frontline unit in Kuup. They also reportedly shut down some factories in the city.

Still, the plan obtained by the JoongAng Ilbo didn’t elaborate on the length of construction or the cost.

“North Korea is hoping to lure investment of more than $1 million from a company in Singapore [for the project],” the source said. “Completion of the project relies on whether they attract foreign investment.”

North Korea has already started construction at Mount Masik, starting with a ski slope, three lifts, an office for ski rentals and a hotel. In phase two, it will build a larger slope, a gas station and a golf course.