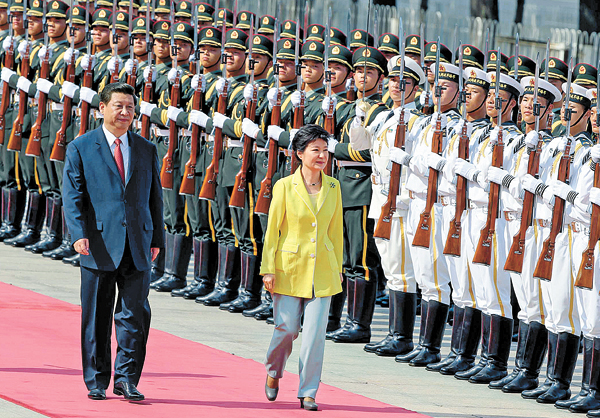 President Park Geun-hye and President Xi Jinping of China yesterday held a summit to discuss efforts to deepen cooperation between the two countries. Following their meeting in the Chinese capital, a joint communique on a future vision for South Korea-China bilateral ties was issued.

Park’s four-day state visit started with the summit, the first opportunity for the new leaders of Seoul and Beijing to discuss their North Korea policies and other diplomatic and economic issues.

In the communique, China expressed support for the Park administration’s efforts to have dialogue with North Korea to thaw icy inter-Korean relations.

“We agreed that a nuclear-armed North Korea will never be tolerated under any circumstance,” Park said in a joint news conference after the summit. “We confirmed that denuclearization of North Korea and peace and stability on the Korean Peninsula serve the two countries’ common interests and agreed to continue strategic cooperation.”

According to the Blue House, it was the first time the two countries’ presidents stipulated in a joint statement that they are working together to denuclearize the Korean Peninsula.

At the press conference, Xi also expressed China’s support for achieving a nuclear-free Korean Peninsula through dialogue and negotiations. “I hope the six-party talks resume as soon as possible,” Xi said.

The joint communique consisted of a five-point main statement and an annex. The Korean Peninsula issue was the third of the five main points.

According to the statement, Park explained to Xi her North Korea policy, known as “trustpolitik” or the “Korea Peninsula trust process,” a two-track approach of promises of strong retaliation against any North Korean attacks while leaving the door for dialogue open. China welcomed Park’s initiative and praised South Korea’s efforts to improve inter-Korean relations and defuse tensions.

“The two sides agreed that the two Koreas are the principal concerned parties of the Korean Peninsula issues,” the statement said. “To resolve the issues, they must take initiative through talks between the two governments.”

China’s support for inter-Korean dialogue came after talks between Seoul and Pyongyang were recently called off at the last minute. The two Koreas agreed to have a meeting in Seoul earlier this month, but the plan was scrapped at the last minute after they failed to agree on the ranks of the chief negotiators.

According to the statement, South Korea expressed its concern about the North’s repeated nuclear tests and made clear it won’t tolerate a nuclear-armed North Korea.

“The two countries agreed that the North’s nuclear development is a serious threat to the peace and stability of Northeast Asia, including the Korean Peninsula, and the global community,” it said.

Park and Xi also agreed that all the past pledges to end the North’s nuclear program, including UN Security Council resolutions and the Sept. 19, 2005 joint statement from the six-party talks, must be implemented fully, the communique said. In the 2005 agreement, the North promised to dismantle all its nuclear arms and return to the nonproliferation treaty.

The two leaders also agreed to work to restart the six-party talks to realize a nuclear-free Korean Peninsula.

South Korea expressed its hope that China would play a more constructive role to bring about changes on the peninsula and China expressed its support for the improvement in inter-Korean relations based on dialogue and trust.

In addition to the North Korea issue, the joint communique also offered a broader vision of a deepened relationship between South Korea and China. The two countries established diplomatic relations in 1992 and yesterday’s summit was the 31st meeting between the presidents of the two countries.

“This unprecedented joint communique offered the big picture for the development of the two countries’ relationship,” the South Korean Ministry of Foreign Affairs said in a press release, adding that it included a “more comprehensive, specific and advanced vision on the bilateral ties and Korean Peninsula issues.”

“Since diplomatic ties with China were started, the relationship went through the first 10 years of honeymoon and another 10 years of settling down,” the ministry said. “For the next 20 years, it was necessary to set a new course for the two countries’ relations by reflecting changed environments at home and abroad.”

Rapid growth in economic and social exchanges with China, China’s rise and North Korea’s more serious security threats created the need to redefine the Korea-China relations for mutual prosperity and development, it said.

The five-point main statement presented an overview of the direction and principles for the two countries’ relationship under the leaderships of Park and Xi and a roadmap to carry it out. In addition to the North Korea issue, the two countries agreed to improve relations by promoting strategic communication on political and security issues.

For economic and social cooperation, the two countries made clear that signing a bilateral free trade agreement is their goal. The two leaders also agreed to extend their currency swap deal by three years. With the agreement, the deal will remain effective until October 2017.

Five specific plans to realize the three goals were also presented and more specific projects were illustrated in the annex.

Among the plans for political exchanges, Seoul and Beijing agreed to create a new channel for dialogue on security issues between the Blue House chief of national security and China’s cabinet member in charge of foreign affairs.

The two countries also vowed to increase their trade to $300 billion by 2015, according to the annex. They also agreed to a visa exemption treaty for their diplomats.

The Park administration said its goal is adding substance to the ties by adopting the so-called joint future vision.

When the two countries agreed to forge diplomatic ties 21 years ago, a six-point joint communique was issued to stipulate the foundation of the relationship. In the communique, South Korea stated its support for the “One China Policy” recognizing the People’s Republic of China as the “sole legitimate government of China,” showing respect to Beijing’s position that Taiwan is a part of China.

That position was stipulated once again in the joint communique adopted yesterday.

Over recent years, North Korea’s nuclear aspiration has emerged as a thorny issue as the international community asks Beijing to use its power to persuade Pyongyang to end its atomic weapons program.

China, the largest benefactor and ally of North Korea, has avoided using direct words in official statements to demand denuclearization of its communist ally.

Instead, it prefers more roundabout expressions, such as “denuclearization of the Korean Peninsula,” for calling for a peaceful resolution of the crisis through dialogue.

Through past summits, South Korea tried to persuade China to issue a stronger message to the North regarding the nuclear crisis, but Beijing resisted.

Although yesterday’s wording in the joint communique did not include more explicit pressure from China on the North, it reflected Beijing’s growing concern about the situation. Pyongyang went ahead with its third nuclear weapons test in February in defiance of Beijing’s warning not to.

“It is the most advanced wording on the Korean Peninsula issue,” said the Blue House. “It is significant because we won China’s support for our North Korea policy and made clear that a nuclear-armed North won’t be accepted.”

Under Park’s predecessor Lee Myung-bak, progress in persuading China to issue stronger messages to Pyongyang was slow, while joint statements issued after presidential summits often concentrated on economic cooperation. The joint statement after Lee’s state visit to China in January 2012, shortly after the death of North Korean leader Kim Jong-il, merely said the two countries agreed to work together to create conditions to restart the six-party talks, without directly mentioning the North’s nuclear arms program or denuclearization of the peninsula.

Following the summit, Park was scheduled to attend a state dinner hosted by Xi. China welcomed Park with special treatment, expressing high hopes for the development of bilateral ties during her presidency. Chinese media and officials have called Park a “longtime friend of China.”

Since 2005, Park visited China four times. This week’s visit also marked an unprecedented trip for a South Korean president because Park chose to visit China before Japan, breaking a longstanding presidential pattern. Her predecessors always visited the United States as their first overseas destination and Japan as the second.

When she was the president-elect, Park also sent her first envoy to China, before the United States.