Need a hot place to cool down? Try a water park

Need a hot place to cool down? Try a water park 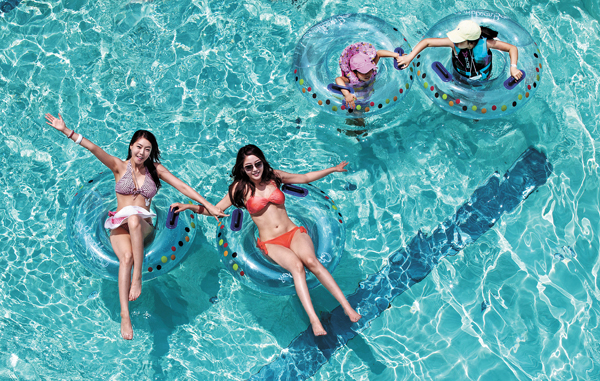 Caribbean Bay is the second-most-visited water theme park in Korea. By Shin Dong-yeon

Summer has come early this year - temperatures recorded around Seoul and the surrounding area early this month were the hottest in 107 years. And in line with the soaring temperatures, water theme parks have already opened up their gates.

Last year more than 7 million Koreans visited water parks, while this year, the number is set to exceed 8 million. This is not only because of the hot days ahead but due to new parks opening up. Last month, a city-based theme park, One Mount, opened up in Goyang, Gyeonggi. Meanwhile on June 14, another park - a first along the southern coast - Ocean Bay in Geoje, South Gyeongsang, opened. Combined, the parks expect a turnout of some 1.3 million (One Mount: 1 million; Ocean Bay: 300,000) this season.

Statistics from abroad testify that Korea is mad about water parks. According to Themed Entertainment Association, last year Ocean World ranked fourth, Caribbean Bay sixth and Spa Castle 11th on the list of most-visited water parks around the world.

The numbers are set to rise though as next year Lotte World will jump on the bandwagon with a water park in Gimhae, South Gyeongsang. The year after, High One Resort in Jeongseon, Gangwon will follow suit. As summer gets in full swing, the JoongAng Ilbo evaluated the best of the best. 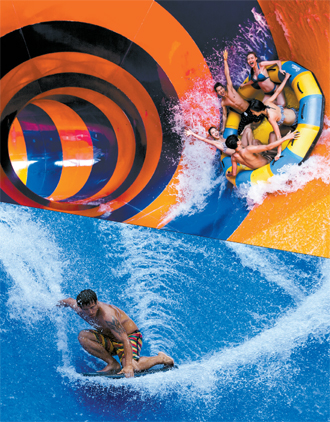 “Super S Ride” at Ocean World (top) and “Surfing Ride” at Caribbean Bay are not for the faint-hearted.

Upgrades help top dogs stay ahead of the pack

The top dogs of water parks in the country are Ocean World and Caribbean Bay. With sheer size, history and exceptional amenities the two parks are the cream of the crop.

From 1996 to 2010, Caribbean Bay dominated as the leader. All that changed in 2011 when Ocean World usurped the top spot with 1.72 million visitors (Caribbean Bay had 1.5 million).

In the past two years, Ocean World was No.1. And to keep its spot, the park diligently upgraded its facilities this year. After having top stars like Lee Hyo-ri, After School and Son Dam-bi as the faces of the venue, the park recruited the hottest girl group of the moment, Sistar.

New facilities will also up the ante. “Super Wide River,” a new attraction, opened this month and consists of five floodgates that pour some 190 tons of water onto a 300-meter-long (984-foot-long) waterway with floating tubes in it. Riders will feel the surge at various intervals, much as if they were rafting.

Meanwhile at Caribbean Bay, it’s all about having a good time as for a month in July, the main attraction, “Caribbean Bay,” will be turned into a party venue.

The park spent a lot of money to evoke a club atmosphere and while at it, took time to address patrons’ complaints.

To combat long waits, which result in grumpy patrons, there is a reservation system placed on “Tower Boomerango” and “Water Bobsled.” There is also a new electronic display installed which will help family and friends locate lost posse members. Some new deck chairs and massagers have also been purchased. 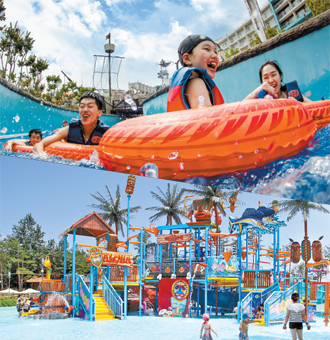 It probably doesn’t hurt to soak in water with healing properties. So to visit a water park that uses water drawn from hot springs would be a definite plus. Of the 14 parks, those that use thermal water are Resom Spa Castle, Seorak Waterpia and Paradise Spa Dogo. All three claim to use water with healing properties. This means not only are the pools heated; there are minerals in the water you paddle around in.

Of the three, Resom Spa Castle and Seorak Waterpia also have an added bonus of various rides; sometimes these rides overshadow the quality of the water.

Resom Spa Castle draws the most visitors of the three. Last year, more than 1.15 million people visited. There are various spa facilities both indoors and out. The park has received the Korea Industrial Standard mark, vouching for the quality of its water source. The water is from the Ducksan hot spring, which has been regarded for the past 600 years for containing geranium, which is good for the skin. One star attraction at the park is “Adventure Waterpool,” in which a waterfall-like feature massages your body. There are also tea, fruit and other organic-themed pools.

Seorak Waterpia on the other hand offers fantastic views of Mount Seorak as you soak and play. There is a hot pool which reaches 50 degrees Celsius (122 degrees Fahrenheit) and with nitrium, potassium and calcium in the water, your body will thank you. The healing properties of the water are thought to be beneficial to those suffering from arthritis.

This year, the park recruited the help of singer Yoon Min-soo and his son (the two appear on a hit variety show, “Dad, Where Are You Going?”) In an industry which places bikini-clad entertainers as the face of their brands, Seorak Waterpia is doing its bit to market itself as a family trip destination. 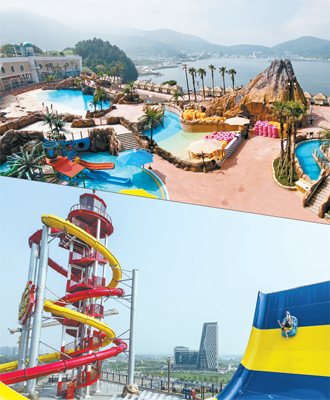 New park Ocean Bay (top) and One Mount are expecting a big turnout over the summer.

One Mount vs. Ocean Bay

In the city or by the sea, there’s room for all ages

One Mount opened its gates on May 11 in Ilsan, Gyeonggi. It’s the first water park in a city, doing away with the notion that water parks should exist in remote areas usually reserved for vacations. The park is right next to a high-rise apartment complex. Although in the city, size is no issue for One Mount. The surface area of the park is 40,000 square meters (9.88 acres). It is Korea’s third-largest water park, coming in after Caribbean Bay and Ocean World. The park’s capacity is a whopping 10,000 people.

Despite its size, the park is sectioned off for the different demographics. Facilities for kids are on the fourth and fifth level, while those attractions popular with adults are concentrated on the seventh. The highlight attraction is no doubt the “Sky Boomerango.” It’s a tube ride for two about 20 meters (65.6 feet) high. The ride is also a bumpy one: after a slide, you swerve upward again before falling into the pool. Next to the “Sky Boomerango” is the “Coloride,” a slide with a 10-meter vertical drop. Apparently, you will experience free falling as you are dropped. There is also a nice area next to the pool on the rooftop, which is perfect for parties.

Ocean Bay, the second park opened by Daemyung Resort (the first is Ocean World, of course) is near the port of Geoje in Gangwon province. Usually, it’s strange to have a water park by the sea; you wonder if it’s not better to just go for a dip in the ocean, but because of the rocky shore that stretches in front of Ocean Bay, settling for a dip in the pool as you look out to the ocean seems the better choice.

Of course, Ocean Bay is a theme park located inside Daemyung Resort. So the park paid a lot of attention to the fact that a lot of families would visit. The outdoor wave pool is 1.5 meters at its deepest point and there are specific facilities for kids.