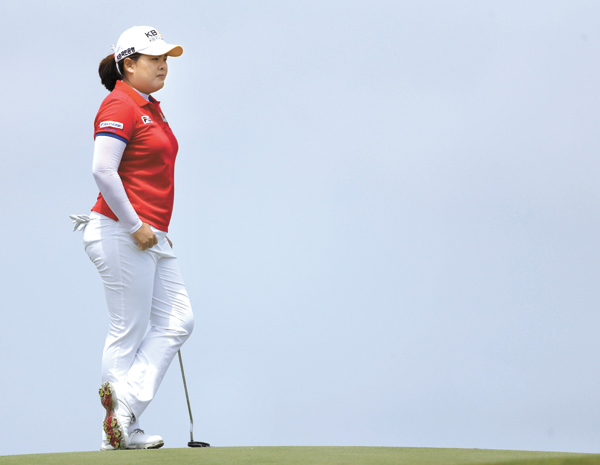 Park In-bee waits to putt on the third green in the third round of the U.S. Women’s Open at Sebonack Golf Club in Southampton, N.Y., Saturday.[AP/NEWSIS]

SOUTHAMPTON, New York - Park In-bee was mad, even if it didn’t show in her always placid demeanor.

She had made bogey, her third straight, on a hole she thought she should have birdied, and the world’s top-ranked player was looking a bit shaky.

Time for a clutch putt.

Park is now one round away from history, leading the U.S. Women’s Open by four strokes. She shot 1-under 71 on Saturday in harsh conditions at Sebonack and was 10 under for the tournament.

Fellow Korean Kim In-kyung (I.K. Kim) had a 73 to remain in second but lost two strokes to Park. With the wind whipping, the course set up long and the pin placements tricky, Park was the only player to shoot under par in the third round.

No one has ever won the first three majors in a year when there were at least four.

“I’m just going to try to do the same thing that I did for the last three days,” Park said. “Yeah, it will be a big day. But it’s just a round of golf, and I just try not to think about it so much.”

She wasn’t too disappointed by her bogeys on the 11th and 12th; those were tough holes. But on the par-5 13th, her chip on her third shot rolled into the bunker when it should have put her in position for a birdie putt.

She still led by three strokes but appeared vulnerable - at least by her recently lofty standards.

“That bogey was a bad bogey,” Park said, “so after that I really got my concentration going.”

She was unlucky, then lucky on the par-4 14th. She thought her second shot would be pushed back by the wind, but it carried too far and settled on the ridge above the hole. No worries: Park simply holed a 30-foot, downhill putt for birdie.

“That was a big putt for me,” she said. “Those three bogeys were very tough to handle in the kind of situation that I was in.”

A hole later, she made a 15-foot birdie putt.

It looked as though nobody would break par for the day until she birdied No. 18. Only five players were under par for the tournament.

England’s Jodi Ewart Shadoff (74) was third at 3 under. She had to play 21 holes Saturday after the second round was suspended the night before because of fog. Park had good timing Friday: Her group was on the 18th fairway when the horn sounded, so she was able to finish off her round and rest up for the weekend.

Not a morning person, Ewart Shadoff didn’t enjoy waking up at 4:30 a.m. She birdied the 18th hole to earn a spot in the final group with Park and Kim, then took a nap in the four-plus hours between rounds.

Ewart Shadoff had a chance to make things interesting on No. 12 with Park on the way to a bogey. But her long birdie putt slid over the hole, and she missed the par putt. Instead of pulling within two strokes of Park, Ewart Shadoff remained four back.

Then she bogeyed two of the last three holes.

Kim had a double bogey on No. 3 to fall back. She played 2 under the rest of the way, but that one bad hole allowed Park to put some distance between them.

“She is playing great. But you never know, I might have a great day tomorrow,” Kim said. “So golf is a different thing than other sports. That’s why you play four rounds.”

If Park shoots even-par or better Sunday, it will be just the fourth time the U.S. Women’s Open was won with a score in double digits below par.

No wonder Brittany Lincicome joked to reporters, “I think In-bee’s playing a different golf course, which you guys are unaware of yet.”

It certainly feels that way.

With Park again on a different plane from the rest of the field, the biggest excitement Saturday might have come when Jessica Korda fired her caddie after nine holes and replaced him with her boyfriend.

The switch seemed to work: After shooting 5 over on the front nine, Korda was 1 under the rest of the way. She finished with a 76 and was tied for sixth at 1 over, 11 strokes behind Park.

“I’m just going to think that I.K. and I am tied starting in tomorrow’s play because anything can happen out here,” she said. “I mean, four shots, it could be nothing around this golf course. So I just have to keep pushing myself to make pars. I think par is going to be good enough tomorrow, but I’m just going to try to do my best. A lot of thinking going on, a lot of pressure.

“But I’ve done that before, so I think the experience is going to help me going through it tomorrow.”