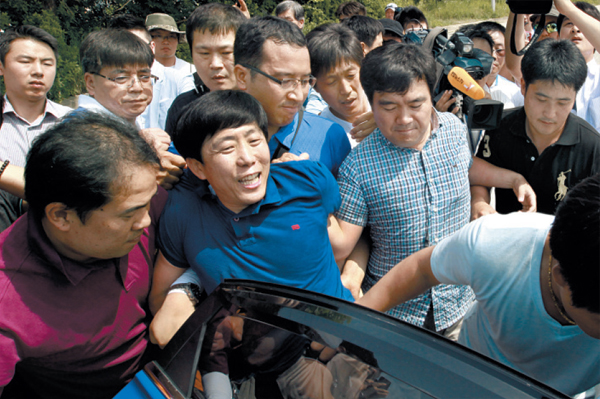 Park Sang-hak, a North Korea democracy activist, is put into a police car Saturday by plainclothes police officers at Imjingak, a border village some 40 kilometers (25 miles) northwest of Seoul near the demilitarized zone. By Park Sang-moon

“Get out of my way!” screamed Park Sang-hak, a defector-turned-North Korea democracy activist, at the group of stern-faced police who were blocking a truck he was inside on Saturday at Imjingak, a tourist site near the inter-Korean border. The police were lined up in front of the truck containing pro-democracy and anti-Pyongyang leaflets that were supposed to be sent off to the North across the border.

The police officers stood firmly, as if they did not hear a thing from Park, and an outraged leaflet activist turned on the truck and pushed the accelerator as if to run over the police officers.

The roaring sound of the engine was not enough to make the police flinch. A frustrated Park started up the engine again, and it slowly moved forward. The lines of officers who were surrounding the truck stepped aside.

“Arrest him!” shouted a plain-clothes police officer. A dozen policemen squeezed inside the vehicle, dragged Park out and put him in a police car, ending a 20-minute brawl in which police were dispatched to Imjingak to stop Park and his group from launching high-profile helium-filled balloons containing thousands of anti-Pyongyang leaflets, some of which were filled with one-dollar bills.

Saturday marked the third time since February that the Park Geun-hye administration has blocked the anti-North group from flying some 200,000 leaflets critical of the Kim Jong-un regime inside helium gas-filled balloons.

The country’s first female president has disallowed the North Korean human rights activist from doing what he had done over the past 10 years in public, in what may be Park’s gesture to the young leader in Pyongyang that Seoul cares about Pyongyang’s anxiety over the leaflets and that it will not allow the anti-Pyongyang event to be held in the media spotlight.

Clearly, Park Sang-hak and his supporters are not happy about it.

“There are 20-some million people [in North Korea] living in slavery, and some of them are related to you [South Koreans]. It’s outrageous… It [sending balloons] should not be illegal and should not be stopped,” said Thor Halvorssen, founder of the international human rights group Oslo Freedom Forum, who accompanied Park along with other international human rights activists to the launching site Saturday.

“He (Park) came to South Korea as a result of the leaflets, so it’s proof that it’s having an impact and helping some people. And Park is only interested in helping people.”

Since 2004, Park, president of the Fighters for Free North Korea, has sent millions of anti-Pyongyang leaflets across the tense border, often referred to as the world’s most militarized zone, with the purpose of informing his fellow North Koreans what is really going on in and out of the heavily isolated country.

With each balloon containing thousands of plastic bags filled with one-dollar bills and anti-communist regime messages, Park told the Korea JoongAng Daily earlier this month that he firmly believes “the spread of information amongst oppressed North Koreans would in the end set them free.” “I have done this for 10 years. By telling the truth for 10 more years, I am confident that the dictatorship would be demolished by the North Korean people,” said Park.

In recognition of his 10-year efforts, the son of a former North Korean elite spy who was stationed in Beijing and Tokyo, received the Vaclav Havel Prize for Creative Dissent by the Oslo Freedom Forum in Oslo, Norway, last month, the same city where former president Kim Dae-jung received the Nobel Peace Prize in 2000 for his opposite approach to dealing with the late North Korean leader Kim Jong-il, including pushing for inter-Korean business projects.

Park began his high-publicity events in 2004 amid indifferent attitudes from the Seoul and Pyongyang regimes, both of which sought economic and social cooperation under the so-called Sunshine Policy. At the time, Park said neither Seoul nor Pyongyang cared about his balloon activities.

Then came September 2008, when Park was invited by former U.S. President George W. Bush to the White House for a meeting, which subsequently changed everything.

“It was a meeting with George W. Bush in October 2008 that my leaflet activities became so much of a well-known event to the public. Bush’s calling me as a freedom fighter was broadcast by CNN during the meeting. When I flew back to Korea, I was bombarded with media interview requests.”

With the more conservative President Lee Myung-bak in office, Park said his group had more leeway in carrying out public launchings and media attention paid to their events.

“With the Lee Myung-bak government in power, we were able to proceed with public launchings every time we made a request for the event, except only once.”

That only once refers to the Lee administration’s banning of the launch last October when Pyongyang vowed to shell the announced launching site if Park’s group proceeded with the launching.

The warning came when the two Koreas’ relations dropped to their lowest point during the Lee administration, which put in the so-called May 24 sanctions against Pyongyang as retribution for the sinking of the Cheonan warship and the shelling of Yeonpyeong Island in 2010.

Under the retaliatory sanctions, most cross-border interactions and business projects ground to a halt.

Besides Pyongyang, not everyone agrees with Park’s determination to spread information in the North via leaflets. Some criticize his public actions, saying it only aggravates inter-Korean relations and does not really work to improve human rights conditions in the North.

“Sending leaflets across the border is a direct violation of the principle of the [1992] Inter-Korean Basic Agreement, in which the two Koreas agreed to stop hostile action against each other. When we are not following through on the rule we agreed upon, how can we demand them stop hostile action against us?” said Professor Lee Woo-young at University of North Korean Studies in Seoul.

The controversial Park agrees that his action is a performance, but explains he does it in order to raise donations for the group.

“Of course, launching balloons in front of reporters is a performance,” says Park, who continues there is a reason for the performance: donations.

“No government agencies have given us financial assistance in the 10-year campaign. We need to do a public launching once in a while to let our donators and prospective donators know what we are really doing.”
And surely, with Park’s confrontation with the police and subsequent dragging to the police station on charges of interference in the exercise of public official duty at the border site Saturday, Park seems to have achieved his intended goal.

Kwon So-Yeon and Roh Gi-Young contributed to this article.