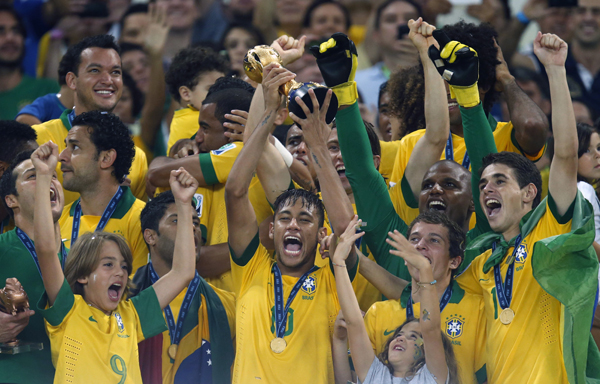 RIO DE JANEIRO - Brazil came out on top in the matchup of past and present football powers on Sunday, winning its third Confederations Cup title and boosting its confidence ahead of next year’s World Cup.

The hosts proved too strong for world champion Spain, cruising to a 3-0 victory at the Maracana Stadium in the match everyone had been expecting for years.

Spain did not have what it took to stop Brazil’s reinvigorated team, allowing the five-time world champion to earn a resounding victory with two goals by Fred and one by young sensation Neymar.

“We played a very good match, it allows us to have a better idea about the path ahead of us,” Brazil coach Luiz Felipe Scolari said. “We have a good team to play in the next World Cup.”

Fred put Brazil on the board less than two minutes into the match, Neymar added to the lead just before halftime and Fred netted his fifth goal in five matches early in the second half to give Brazil the victory at the World Cup warm-up tournament.

“We beat the world champions today, but we know that the tournament that we will be playing next year will be a lot more difficult,” Scolari said. “Now we have more confidence, that’s what we needed.”

Sergio Ramos missed a penalty kick in the 55th and Spain ended the match a man down after defender Gerard Pique was sent off with a straight red card for fouling Neymar in the 68th.

Brazil came in hoping a victory would help it regain its status as a global powerhouse after recent struggles. Brazil was eliminated in the quarterfinals in the last two World Cups and hadn’t won a significant title since the 2009 Confederations Cup in South Africa.

“The champion is back,” chanted the crowd of more than 73,000 people at the renovated Maracana, the stadium that will host the World Cup final on July 14, 2014.

It also didn’t take long before the fans ? in a sea of yellow jerseys ? started teasing the Spaniards, chanting “Wanna play, wanna play!? Brazil will teach you.”

The Brazilian players huddled after the final whistle and started singing and jumping, then went toward the crowd near the sidelines and began celebrating. David Luiz kneeled down and raised his hands into the air.

Brazil, which won its fourth Confederations Cup, has not lost a competitive home match since 1975.

The result ended Spain’s 26-match unbeaten streak. Ranked first for the past 20 months, Spain hadn’t lost since a 1-0 result to England in a friendly in London in 2011. Its last loss in an official competition had happened 29 matches ago, in the 2010 World Cup opener against Switzerland. AP