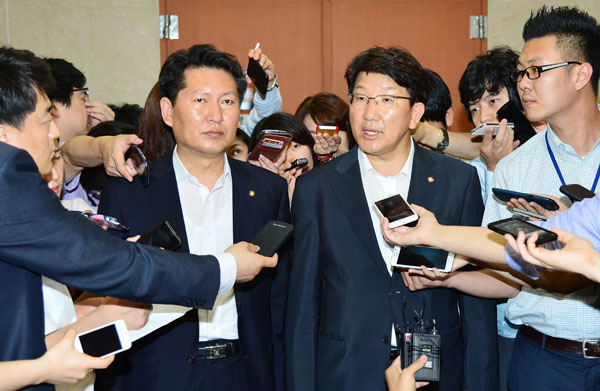 Rep. Kweon Seong-dong, left, of the ruling Saenuri Party, and Rep. Jung Chung-rae, right, of the main opposition Democratic Party, speak to reporters yesterday in the National Assembly after they had a joint press conference over a plan to launch a legislative probe into smear campaign by the National Intelligence Service. [NEWSIS]

Lawmakers from both ruling and opposition parties reached an agreement yesterday to launch a 45-day probe into the alleged smear campaign by the National Intelligence Service in an effort to sway public opinion ahead of the presidential election last year.

Representative Kweon Seong-dong of ruling Saenuri Party and Representative Jung Chung-rae from opposition Democratic Party, both members of the so-called “special committee for a legislative probe to learn the truth behind the alleged NIS online campaign,” met yesterday in the National Assembly and agreed to launch a legislative probe. The probe, which starts today and will close on Aug. 15, will investigate whether the NIS launched illegal campaigns in favor of then-ruling party candidate Park Geun-hye ahead of the 2012 presidential election.

The committee, composed of nine members from Saenuri, eight from the Democratic Party and one from the Unified Progressive Party, will be headed by Shin Ki-nam, a DP member.

They will convene their first meeting today at the National Assembly and discuss details on the plan to be officially adopted.

The probe by lawmakers will be carried out separately from the ongoing investigation by state prosecutors into the same allegations that NIS workers posted political comments promoting the Lee Myung-bak administration and the ruling party’s presidential candidate Park Geun-hye, while attempting to harm the reputation of the opposition’s rival candidate Moon Jae-in.

South Korean law currently prohibits the spy agency from participating in all kinds of domestic politics.

In the outlined plan, lawmakers said the goal is “to figure out the real truth regarding several suspicions including the NIS workers’ alleged intervention into the presidential election, its attempt to hush up the [police] investigation into the case, as well as to prevent similar incidents and arrange some policies for setting up political neutrality of the NIS.”

Ruling and opposition politicians have disagreed over the details on the plan, including whether they would make public the procedural details of the probe and whom they should select as witnesses.

Democrats suspect that Saenuri lawmakers want to divert public attention from the NIS case through the surprise disclosure of the classified inter-Korean summit transcript between then-president Roh Moo-hyun and his counterpart Kim Jong-il in 2007, in which Roh told Kim that the de facto sea border known as the Northern Limit Line “should be changed.”

Opposition members have raised questions on the credibility of the transcript provided by the NIS. They are demanding the surprise disclosure of the classified transcript be included as a subject of the legislative probe. Saenuri lawmakers have not agreed.

Lawmakers also clashed over the selection of special committee members. Both sides attacked the lack of political neutrality of opposing members and demanded some to be excluded.