The NLL tainted by politics

The NLL tainted by politics 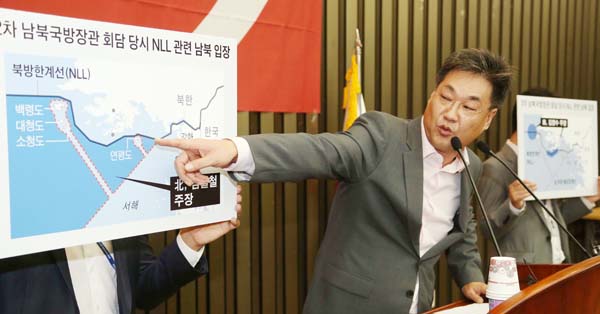 On the issue of whether former President Roh Moo-hyun told North Korean leader Kim Jong-il that he would abandon the Northern Limit Line in the West Sea at the South-North summit in October, 2007, the ruling and the opposition parties have been in a fierce battle for months. Eventually, the National Intelligence Service declassified the conversation record of the summit, a verbatim record of the talks prepared and kept by the agency, and made it public to quell the controversy and, according to the secret agency, to protect its reputation. However, even the exposure of the government secret failed to stop the duel between the two rival factions.

The opposition still insists that there is no statement on the verbatim record that former President Roh said, “I disavow the NLL.” On the other hand, the government party says that President Roh made negative remarks on the NLL directly to Kim Jong-il, and that such remarks constitute an act of betraying the people. After all, the difference in their assertions is nothing but the degree of severity between a declaration of disavowal and a stated willingness to disavow.

What is more important is that Roh and his aides covered up that the NLL issue was discussed at the 2007 summit until a recent date. Lee Jae-joung, former unification minister, and Kim Man-bok, former director of the NIS, who attended the summit meeting accompanying former President Roh, held a press conference on Oct. 10, 2012, and declared that there were no discussions on the NLL between Roh and Kim Jong-il during the 2007 summit. I am curious to know why the attendees of the summit bore, five years later, false witness to the people saying that there was no discussion on the NLL at the summit meeting.

There is one thing in common in the months of October, both in 2007 and 2012. They were only two months away from the presidential election held that year. Actually, it can be said that the 2007 South-North summit was staged in October in order to create a favorable environment for the presidential candidate of the then-Democratic United Party. Unfortunately, however, the NLL issue was raised by Kim Jong-il unexpectedly. The leading members of the party thought that the issue would have a negative effect on the party’s presidential candidate. They decided, therefore, not to reveal the conversation record of the summit, in which the discussions on the NLL were included, and covered up the fact that the issue was discussed at the summit meeting at all. Thus, the proposal Kim put forward vanished into thin air.

Five years later, in October 2012, the NLL issue was raised again. Representative Chung Moon-hun of the Saenuri Party claimed that there was a transcript of the 2007 South-North summit conversation, and that Roh said he would abandon the NLL according to the written record. The DUP worried that Representative Chung’s assertion on Roh’s expression of his willingness to abandon the NLL would adversely affect their presidential candidate. Therefore, they asked Lee Jae-joung and Kim Man-bok to hold a press conference and bear false witness that there was no discussion on the NLL at the 2007 summit.

Changing the NLL would change the territorial boundary of our country. It could also put the lives and property of people in the Seoul metropolitan area in danger. It is an absolute impossibility, therefore, that Roh made a statement that could be interpreted as accepting of Kim Jong-il’s NLL proposal.

However, in the course of the 2nd South-North Defense Ministers Meeting held right after the summit, from Nov. 27-29, there was an implication that Roh made a certain concession, in connection with the NLL, to the North. North Korean Chief Delegate, Kim Il-chul, minister of the People’s Armed Forces of North Korea, told Kim Jang-soo, then defense minister, “You insist on the NLL due to your ignorance of the spirit and the outcome of the inter-Korean summit.”

At that time, the North insisted on joint fishing zones in the area between their Maritime Demarcation Line and the NLL. They refused to accept our proposal to install equal-area joint-fishing-zones along the NLL. According to military sources, if we accepted their proposal, it could have been worse than simply abandoning the NLL, as the North’s Maritime Demarcation Line extends as far down as the Baekryeong and Yeonpyeong Islands. It would invalidate the NLL and create a vacuum in our surveillance operation against the North’s army. After all, Pyongyang became embarrassed as the South stubbornly insisted on keeping the NLL intact. The meeting ended without a result.

A transcript of the summit made public by the NIS last Tuesday is 103 pages long, including 12 pages that deal with the NLL issue. Still, it is not easy to pinpoint a passage that can be interpreted as a straightforward statement that President Roh disavowed the NLL. But 12 pages of discussion on the issue prove that it was an important agenda item. Usually, important items discussed at summit meetings are closely followed up by the government branches that are responsible for the matter. But the NLL issue was abandoned because it could adversely affect the presidential candidate.

We must brace ourselves to cope with the possible aftereffects of Roh’s remarks. If North Korea claims that the installation of joint-fishing-zones, citing an agreement at the 2007 summit, both the ruling and the opposition parties should proclaim jointly that we will defend the NLL to the last until equal-area peace zones are created on both sides of the NLL.

*The author is a visiting professor of communications at Sejong University.