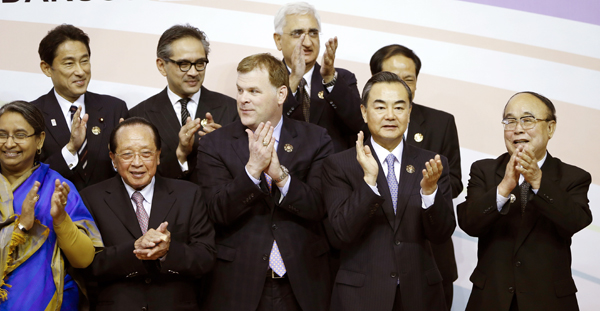 Foreign ministers in attendance at the Asean Regional Forum (ARF) showed a united front on the denuclearization of North Korea in a joint statement yesterday in Bandar Seri Begawan, Brunei, a rare opportunity for all nations involved in the stalled six-party talks to be present.

The 20th ARF Chairman’s statement urged North Korea to comply with its obligations under UN Security Council resolutions and said that “the ministers reiterated their support for all efforts to bring about the denuclearization of the Korean Peninsula in a peaceful manner.”

U.S. Secretary of State John Kerry, who met with Chinese Foreign Minister Wang Yi on the sidelines of the security forum and trilaterally with the foreign ministers of Japan and South Korea, said, “All four of us are absolutely united and absolutely firm in our insistence that the future with respect to North Korea must include denuclearization,” in a press conference Monday.

“China made clear to me they have made very firm statements and very firm steps that they have taken,” he said, “with respect to the implementation of that policy.”

But North Korean delegate Choi Myung-nam, a deputy director of the foreign ministry’s international affairs, told reporters yesterday that the Sept. 19, 2005 Joint Statement of the Fourth Round of the Six-Party Talks - between the Koreas, U.S., Russia, Japan and China - was “outdated.”

The 2005 statement stipulates that the North abandon its nuclear weapons program, and the statement reminded Pyongyang of this obligation. North Korea officially walked away from the six-party negotiations in 2009, though talks were last held in 2007.

“The United States, South Korean and Japan don’t abide by the statement, so it is not right to request us to do so,” Choi said.

He added that Pyongyang will continue its hard-line position unless “the increased nuclear threat from the U.S. disappears.”

Pak held bilateral talks with his Chinese counterpart Wang Yi, but has not met separately with Yun or Kerry.

During the initial talks Sunday, foreign ministers of the 10-member Asean countries plus three - South Korea, China and Japan - in a joint statement Sunday said that they “recommended that the (regional forum), where all six members of the six-party talks are also participants, could contribute to forging a conducive atmosphere for the resumption of the six-party talks.”