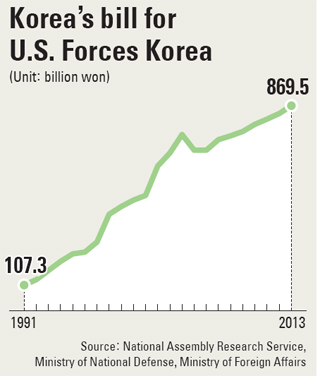 As Seoul and Washington began negotiations to renew their cost-sharing agreement for keeping U.S. troops in Korea, concerns grew here about the prospect of the expensive deal and the lack of the Korean government’s oversight on how its money was actually spent.

Korea and the United States started talks in Washington on Tuesday (U.S. time) and the outcome of the negotiations will serve as the standard for Seoul’s financial contribution to cover the expenses of keeping U.S. Forces Korea here from 2014-18.

Hwang Joon-kook, a senior diplomat who once headed the North Korean nuclear issue bureau of the Foreign Ministry, is the chief negotiator for Seoul and his counterpart is Eric John, deputy assistant secretary of state and an expert in Korea affairs.

As they sat down at the negotiation table, concerns were shown by the National Assembly that the Korean contribution was treated by the U.S. Forces Korea as if it were “free money,” while the Korean government had little oversight to stop it, although it has paid for an increased amount every year for the past two decades.

In 1991, the two countries concluded a multi-year cost-sharing deal as a special measures agreement under the Status of Forces Agreement. Since then, Korea’s contribution has increased consistently except for 2005 and 2006.

Speculation has grown that Washington will ask Seoul to shoulder a higher burden - which could total up to 1 trillion won - to keep the 28,500-strong U.S. Forces Korea due to the U.S. defense budget cut under the sequester.

The current deal expires at the end of this year.

The JoongAng Ilbo obtained Monday an analysis report by the National Assembly Budget Office. It pointed out various shortcomings of Seoul’s management of the USFK’s defense spending, despite its annual contribution of large sums.

In the report, the budget office of the legislature showed concerns about Seoul’s negotiation method. Since 2005, the government negotiated the total amount of its contribution in its talks with the United States.

In the latest negotiation in 2008, Seoul agreed to contribute a total amount of 760 billion won in 2009. It also agreed that starting 2010, an additional payment to that sum will be provided by taking into account the price inflation of no more than an annual 4 percent.

The report said such a deal on the total contribution amount makes it difficult for the Korean government to obtain specific details on the spending by the USFK.

It also said the method forces Seoul to inevitably pay an excessive amount and a large amount of the budget could be left unspent by the USFK. During the National Assembly’s hearing, it was revealed that the USFK had 761.1 billion won of leftover defense contributions from Seoul as of September last year and the sum was deposited in a bank account.

The National Assembly Budget Office also issued a separate analysis into an April report adopted by the Senate Armed Services Committee on the U.S. costs and allied contributions to support the U.S. military presence overseas. The analysis showed concerns that Seoul has little oversight in USFK’s spending of its contribution.

The report from the Senate Armed Services Committee said the USFK said it will spend $10.4 million from the money provided by the Korean government to build a museum for the U.S. Army’s 2nd Infantry Division at Camp Humphreys in Pyeongtaek.

The museum is targeted for construction in 2014.

“The Committee has traditionally viewed using appropriated funds to construct military museums with some skepticism and USFK’s interest in using [Korean] contributions to build the museum raises the question whether those contributions might be better directed toward more mission critical requirements,” the senate committee said in the report.

The committee also said the USFK spent the Korean contribution to renovate the dining facilities of the Yongsan Garrison, which will soon be relocated. The report said South Korea’s contribution was treated as “free money.”

The National Assembly Budget Office said it is necessary for Seoul to come up with a plan to decide on the size of Korea’s contribution based on the actual needs of the USFK.

“Until now, no mutual standard for the two countries was created to access the cost of keeping USFK,” the office said. “And no discussion took place until now on such a topic. It is, therefore, desirable that the upcoming negotiation will deal with the issues.”

Major developments are already scheduled to take place over the next five years. The United States is scheduled to hand over its wartime operational control of the Korean forces to Korea in December 2015.