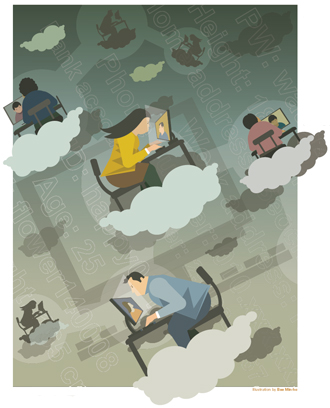 It’s not an exaggeration to say that people go to bed and wake up with their smartphones and personal computers. Also, since the advent of social network services (SNS), mobile messengers and e-mail, it’s become easy to share detailed news from daily routines with friends, colleagues and families without meeting them in person.

However, this convenience came with a price, as people gave up their precious personal information online without realizing they were doing so.

Through mobile messengers, people voluntarily talk about what they eat, where they go and where they shop. Some visit blogs or other portal Web sites to write reviews on certain products they used or post photos of themselves taking a picnic. They also create accounts on various online shopping malls to receive member discounts. With each new account, they voluntarily provide their phone number, home address, and even their hobbies or family connections to the Web site operator.

However, the personal information that people put online to make their lives more convenient has come back to haunt them when they became victims of online “witch hunts,” in which they are misidentified by anonymous Internet users searching for the names or e-mail addresses of people with the same or similar name.

“Social network services in the beginning were positioned as a tool for better communication and human resources networks, but they have deteriorated to a place where people talk about others and distribute malicious information that sometimes induces suicide,” the National Human Rights Commission of Korea said in a report released in January, noting that the disclosure of private information through SNS has become particularly problematic as people must reveal certain pieces of their own information to join SNS. “It has played the role of a factory that sources private information.”

For example, photos of a woman believed to be an intern who claimed she was sexually assaulted by former presidential spokesperson Yoon Chang-joong were distributed from one smartphone to another as people shared them through mobile messengers without verifying the identity of the woman. A few days later, people started distributing photos of another woman, saying that they got the facts wrong in the first place.

In another incident, a copy of a police report about the deceased girlfriend of singer Son Ho-young was circulated online with a photo that may or may not have been the deceased woman.

As such information spreads, people add more details, including job descriptions, family connections, or any other information that might be relevant. Unidentified rumors are also added.

Each piece of information may look trivial and not enough to reveal a person’s identity, but when all the pieces are assembled, it’s possible for Internet users to determine the basic profile of certain people.

“There is a limit to the amount of information one can find from one or two search attempts on portal Web sites or elsewhere online, but when the puzzle gets completed from the little [pieces of] information everyone finds, there goes a release of someone’s identity,” said Principal Researcher Kim Bong-seob at the National Information Society Agency.

One might ask, “Will I be the next victim of a witch hunt?”

No chance to explain

“It is the memory I do not want to recall ever again,” a former victim of an online witch hunt surnamed Park said to the Korea JoongAng Daily when he declined to comment further on his experience.

He was once mistaken for one of the three male students who sexually harassed a fellow female student at Korea University School of Medicine in 2011 during a camping trip as he had the same surname as one of the attackers.

His name, age, and other personal information were disclosed online by netizens who believe that others had the right to know the attacker’s personal information. Park’s denials that he was not the alleged attacker fell on deaf ears because netizens had already formed their own opinions about him.

Park asked the police to find out who had distributed his information and made false accusations so he could clear his name.

Later, the police charged seven people, including a 36-year-old woman surnamed Choi, for circulating unconfirmed information. At the time, it was said that Choi felt angry as a woman that a student sexually harassed a fellow student. She assumed that Park was the real assailant due to his last name and his school information.

Victims like Park who have been falsely accused can clear their name by filing a police report and punishing the people who originated the rumors. However, although Park’s name was legally cleared, people who haven’t followed the police investigation are left believing that what they originally saw or heard was the truth.

Recently, the girlfriend of entertainer Son Ho-young, a former member of the boy group G.o.d., committed suicide in a car. Although the woman’s identity wasn’t released, netizens distributed a photo of a woman who was alleged to be the deceased.


But the person in the photo was not the woman who died.


“I’m alive. Please stop distributing (my) photo,” said the woman on her Twitter page. Her previous posts on the microblog are now private.

After the police report on Son’s deceased girlfriend and the details of the couple’s relationship were passed around, Son tried to commit suicide. 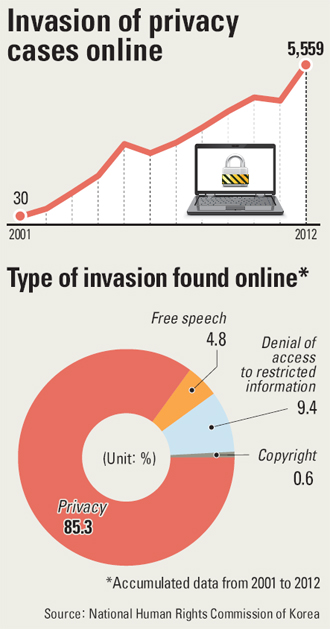 Experts say that people have come to think that it is righteous to dig up the personal information of figures that are targets of online controversies.

“People have come to grow some sense of justice,” said Ko Sang-hyoeb, inspector at the Cyber Terror Response Center, recalling incidents from not long ago.

Many netizens distributed the basic information of people whose names are on the member list of the propaganda Web site operated by North Korea, uriminzokkiri.com, which residents of Korea have been restricted from accessing.

When the list of names became available in April, people started to dig for information without considering the possibility that there can be more than one person who share the same name. Many people have filed police reports for libel.

“(Such action) shows how they have given themselves a right to set the justice in the society as some of them labeled themselves as a ‘netizen investigative team,’?” said Ko.

The term “netizen investigative team” is used to describe people who focus on obtaining details of social issues without having the proper authority to do so.

The police have charged 1,823 people with online defamation through May; over 5,000 people were charged last year.

“We can trace back the origin of troublesome posts, except some particular cases when posts were written from overseas, because we can have court-issued warrants to search the servers, which ordinary people cannot have access to,” said Ko.

In some cases, the possession of certain information may not be illegal as long as it remains private. However, as soon as the information is distributed, especially if it is untrue, is spread to an unspecified number of people online and is being treated as the truth, it becomes a matter of invasion of privacy.

“People tend to believe new information from online as they can instantly check the responses from other people about the news from the accompanying reply posts and convince themselves that the idea greatly supported in the responses is the truth and the general idea,” said Kwak Keum-joo, a psychology professor at Seoul National University.

“Therefore, people care less about the fact if the news itself is true or not, but focus more on whether many people believe the news or not.”

Also, people feel less guilty about delivering unconfirmed rumors to their friends or colleagues because they think that they carry less liability. Their friends have done the same thing and they think that sharing between friends is different from sending information to the masses.

“As it is not that the alleged victim included in the news is right in front of them and the victim would never know the identity of the distributors, people feel more confident about spreading the worlds,” Kwak said.

Another reason for people to become more active about delivering news is that they want to brag that they know things before others do. It serves as proof that they have built a sturdy social network with others.

“I feel weird when I don’t get regular updates from my acquaintances for one day because I continuously get those on an everyday basis,” said an official surnamed Lim who works at a local security company.

Experts say that individuals want to prove to others that they are the mainstream and that they have enough power and resources to know news before anyone else does.

“Hence, such information distribution gets more active among students and teenagers as they have not been recognized as independent social figures yet,” said Kwak.

Worried about losing control of their own information, Internet users have adopted new methods of keeping their information safe while staying connected.

Many social network service users opt to have multiple accounts; one to share shallow information with the masses, while using others to share more personal stories with close acquaintances by restricting the number of people who can see their information.

“I keep Facebook open to check the lives of other people that I became friends with on the Web site,” said 28-year-old office worker Kim Seung-yon.

“So to share more personal information or photos, I use other outlets such as Instagram, which I have control of restricting who to become friends with as soon as I sign up for the service,” adding that she opened her Facebook account too early on, when she didn’t think that she would become “friends” on the Web site with people who hardly know her from work or school.

Because humans have adapted to new trends and technologies throughout history, Kim Bong-seob expects people to find ways to resolve side effects emerging from the proliferation of online and mobile activities.

“When people declare that they won’t use social network services at all due to security reasons, it means people deny the history of how they have built civilizations in the past generations,” said Kim.

To be able to build healthier online and mobile activities, Kim argues that people should have a code of ethics regarding what to do with online information.

“Digitalized information can be easily copied and searched and even though the original information gets to be deleted, no one can tell if the copied information is any different from the original,” said Kim, adding that written posts leave records online while spoken language can only be retrieved from memory - unless it has been recorded with other devices.

She also said that it is important for all Internet users to know that they have become news providers, and not just receivers, which is different from the time when the circulation of news came from trained professionals who were bound by a code of ethics.

“People need to understand the characteristics of digitized information, what power has been bestowed on them and what aftermath the use of such information can bring forth into society,” said Kim, adding that once information is saved on the Internet, it is never deleted completely.

Lee In-ho, a law professor at Chung-Ang University, also said that individuals have the right to control the information they encounter.

“(The privacy) issue is about communication with the information, embroiled with a mix of many different basic rights,” Lee said.

“Individuals have controls and there would be many different ways how to control the information.”