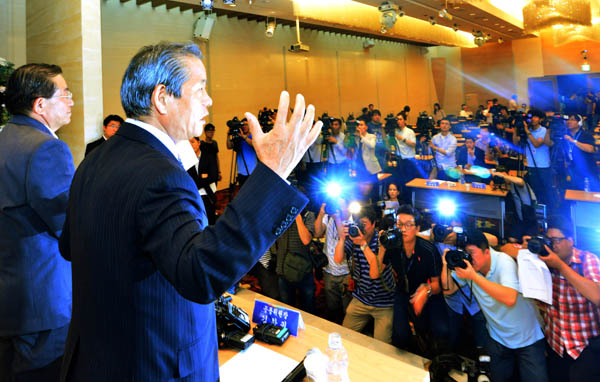 In the conference hall of the Korea Federation of Small and Medium Business in Yeouido, Seoul, yesterday, leaders of the 123 South Korean companies in the Kaesong Industrial Complex announce a list of companies that want to remove their equipment and other materials remaining in the suspended park. [NEWSIS]

Frustrated by the suspension of a factory zone jointly run with North Korea, some South Korean business owners say they’re giving up hope of being able to return and want to remove equipment and assets stuck there.

Owners of 46 out of the 123 South Korean companies in the Kaesong Industrial Complex announced that they want to remove all of the equipment and other materials remaining in the industrial park to redeploy them to South Korea or a foreign country.

The decision came three months after North Korea withdrew its workers and banned South Korean managers from entering the complex after diplomatic relations soured between the two countries.

The 46 companies are mostly mechanical and electronics businesses who worry that their expensive equipment could be harmed by humidity during the rainy season without proper maintenance.

“As the crisis in the Kaesong Industrial Complex continues, we, the makers of machine parts, can’t wait anymore,” the businessmen said in a joint statement. “We demand [the government] make a decision on whether to [permanently] shut down the complex as early as possible for the sake of the companies at risk of bankruptcy.”

“If [the government] doesn’t make any decision, we can’t help but relocate all of our facilities in the Kaesong Industrial Complex to the country [South Korea] or abroad,” they said. “We call upon the government to take proper measures and offer support for the relocation.” 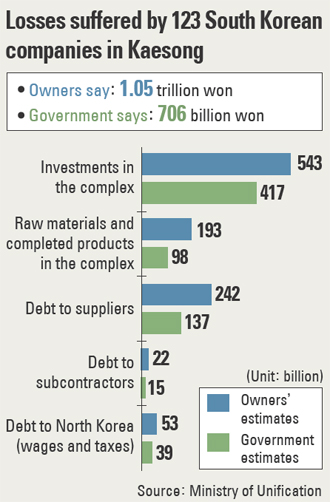 They also asked Pyongyang to allow the relocation and resume communication with South Korean officials through the military hotlines they have cut off.

On April 3, North Korea unilaterally decided to block all entry of Southern workers and cargo into the complex, apparently angry over the adoption of new UN Security Council sanctions against the regime that Seoul supported to punish Pyongyang for its February nuclear weapons test.

Five days later, they pulled out all 53,000 North Korean workers.

Southern businessmen remained in the complex without new supplies of food and raw materials in hopes the North would change its mind.

But on April 26, North Korea refused the South Korean government’s proposal for working-level talks for resumption of work at the industrial park. As a result, all South Korean workers left the complex on May 3, leaving the eight-year-old symbol of the Sunshine Policy of engagement a ghost zone.

The businesses have not been able to bring much out of the complex because the North won’t let them in.

“We have appealed for approval for the visit of a minimum number of our workers for maintenance of our facilities,” Kim Hak-gwon, representative of the owners of the 46 companies, said yesterday at the press meeting. “But the authorities of both North and South Korea didn’t approve this request, and we couldn’t help but make this decision.”

According to the Unification Ministry, the total losses reported by the 123 South Korean companies is about 1.05 trillion won ($918 million). But the ministry acknowledged only about 760 billion won as the official losses of the 123 firms.

The losses for the 46 companies have not been estimated, the ministry told the Korea JoongAng Daily.

The Unification Ministry said the government “will deeply scrutinize” the demand from the companies and “ponder measures.”

“The most effective solution for this problem is for North Korea to return to the government-level talks that our government has already proposed,” a Unification Ministry official told reporters.

When asked how the government would help their relocation, the official said, “It is not a situation that we can handle by ourselves. We need a response from North Korea.”

The official said North Korea has not picked up the phone through the military hotlines at the border village of Panmunjom since inter-Korean talks were called off on June 8. Seoul has kept calling every day.

Even if the 46 companies want to leave Kaesong permanently, the ministry said, a permanent shutdown is not an option for the South Korean government.

“We have never mentioned the word ‘shutdown,’?” the official told the Korea JoongAng Daily. “The complex is just temporarily suspended.”