Kaesong park talks back on

Kaesong park talks back on 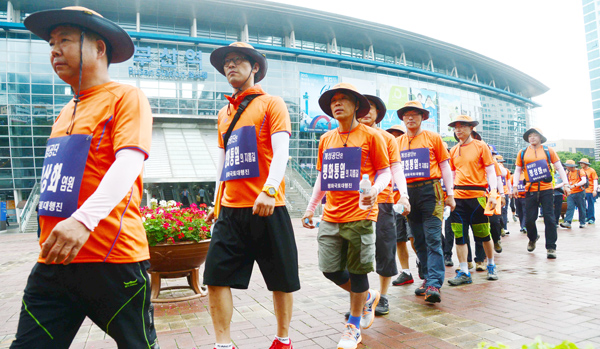 About 50 South Koreans who used to work in the Kaesong Industrial Complex start a nationwide march yesterday from Busan Station to press for the reopening of the park. Their 24-day journey is expected to end at the Imjin Pavilion in Paju, a border city in Gyeonggi, on or around July 27. [NEWSIS]


The two Koreas yesterday agreed to have low-level talks on Saturday aimed at reopening a jointly-run industrial park about a month after a high-level meeting on the same topic was aborted.

The Ministry of Unification said yesterday evening that Seoul and Pyongyang agreed to have a meeting at 10 a.m. in the Tongil (Unification) Pavilion, on the North Korean territory of the truce village Panmunjom. Earlier yesterday, South Korea proposed the low-level meeting and the North responded around 5 p.m. with a counterproposal, including the names of its negotiators.

Seoul sent a notice yesterday morning to the North’s General Bureau for the Special Zone Development Guidance, an organization in charge of the Kaesong Industrial Complex, through the liaison officials at the truce village of Panmunjom, proposing talks on Saturday.

The venue Seoul proposed was the Peace House on the Southern side of Panmunjom, or the Tongil (Unification) Pavilion on the Northern side.

In a reply sent yesterday, North Korea said it wanted talks in the Kaesong Industrial Complex itself, effectively accepting the offer, the Ministry of Unification said yesterday.

Seoul then proposed the Dorasan Immigration Office at the western border, according to YTN television network.

According to Kim Hyung-suk, spokesman for the Unification Ministry, the North also proposed that a group of South Korean businessmen who operate factories in Kaesong should also visit the industrial complex on Saturday.

The South, however, rejected the North’s proposal, saying the government-to-government talks must take place before any civilians visit.

At around 8:30 p.m., North Korea finally accepted all proposals from Seoul, holding the meeting at the Tongil Pavilion without the Southern businessmen.

“At this working-level dialogue, we will be able to discuss the matter of the maintenance of facilities and equipment in the Kaesong Industrial Complex and the return of complete products and raw materials stuck there, and the normalization and development of the complex,” said Kim. 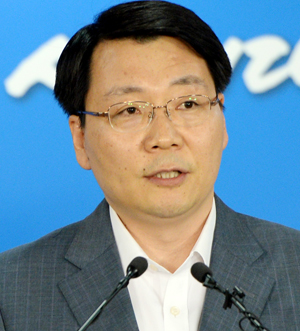 “This proposal was out of consideration that the companies based in the Kaesong complex are suffering from the suspension of operations and they expect more losses ahead of the rainy season,” Kim explained.

When it comes to the rank of South Korea’s chief negotiator, a sensitive issue in diplomacy with the North, Kim said Seoul will send three negotiators and the leader will be a bureau chief at the Unification Ministry, lower than a vice-ministerial-level.

North Korea walked away from two days of planned talks with South Korea scheduled to start on June 12, saying it was insulted by Seoul’s choice of its chief negotiator, who it thought was a lower rank than the North’s negotiator.

At the time, Seoul gave the job to Kim Nam-sik, vice unification minister. The North named Kang Ji-yong director of the Secretariat of the Committee for Peaceful Reunification of Korea, a state-controlled independent organization in charge of inter-Korean interactions.

The South Korean owners of 123 companies in the complex have been banned from returning to the park since April, when Pyongyang reacted to UN Security Council sanctions against the regime by pulling its workers from Kaesong.

On Wednesday, 46 machine and electronic parts manufacturers said they were giving up hope of being able to return and wanted to remove equipment and assets from the complex.

Hours after their announcement, Pyongyang sent a notice to Seoul on Wednesday through the Panmunjom hotline saying it would allow the South Korean business owners to enter the Kaesong complex for maintenance of their equipment.

With new hopes for a reopening of the complex, about 50 Southern workers who used to work in the Kaesong park started a nationwide march yesterday from Busan Station heading to Imjin Pavilion in Paju, Gyeonggi. During their 24-day journey, they will draw public attention to the importance of the issue and promote their wish for restarting operations at the industrial park.

The march is expected to end on or around July 27.

North Korea resumed regular communications with Seoul starting yesterday, picking up the phone from the Southern liaison officials at Panmunjom at 9 a.m. and 4 p.m.