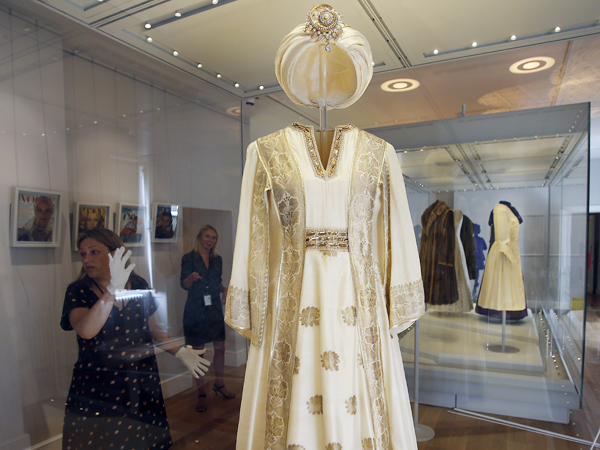 A turban dress worn by Princess Margaret, at the Fashion Rules exhibition at Kensington Palace in London, which opened on Thursday. [AP]

The couture on display in a new exhibit at Kensington Palace shows that each, in their way, made an impact in Britain and beyond. Princess Margaret - the queen’s younger sister - dressed in some of the boldest styles of the day and was looked up to as one of fashion’s leading ladies. And Diana practically embodied the ’80s style and was scrutinized for what she wore wherever she went.

The exhibition showcases just how the styles of three royal ladies - Margaret, Diana and the queen - each reflected and influenced the trends of their fashion heyday.

“We’re looking at how the three women dressed to the trends and how they adapted those rules to the rules of royal dressing,” said Cassie Davies-Strodder, the exhibition’s curator.

The show, which opened on Thursday, features 21 couture dresses from the three royals’ wardrobes, ranging from regal silk gowns worn by a young queen in the 1950s to the sparkly and sequined numbers Diana sported in the 1980s and ’90s.

While Diana’s gowns are likely the biggest draw for many visitors, Davies-Strodder said she was nowhere near as adventurous in her style as the fun-loving Margaret, who threw famous parties and mixed with pop stars like The Beatles. The princess, who died in 2002, was a trendsetter in the Swinging London scene of the 1960s and ’70s.

“She wasn’t the monarch, so she had greater freedom to follow changing fashions more closely,” she said.

Among the outfits worn by Margaret on show was a dramatic long kaftan and turban set, reflecting the “ethnic dressing” trend of the ’70s, worn at a party on the Caribbean island of Mustique in 1976. Another eye-catching display was a glamorous, jeweled ball gown with a Marilyn Monroe-style halter neckline worn in 1951.

The full-length gowns worn by the queen when she was in her 30s, shown in adjacent rooms at the palace, were traditional and demure in contrast.

All featured a feminine nipped-in waist and were designed in pale creamy shades of peach or grey - royal designers preferred light-colored clothes because they show up better in a large crowd and on black and white television, Davies-Strodder said.