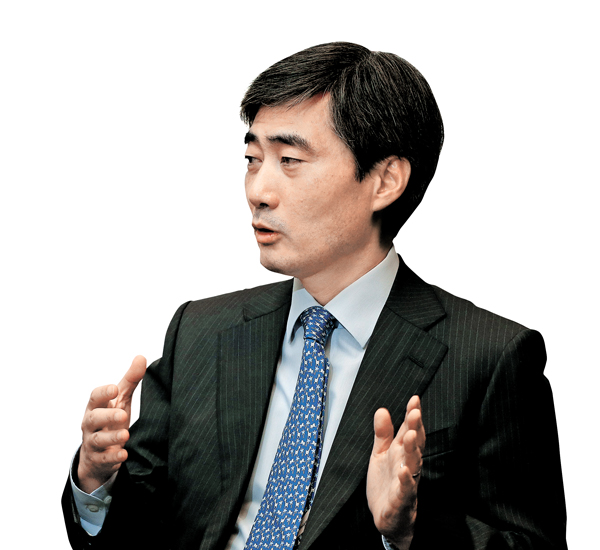 Since the quantitative easing policy in the United States was a new and novel reaction to the 2008 financial meltdown, an exit policy is totally uncharted waters.

Statements by Chairman of the U.S. Federal Reserve Ben S. Bernanke saying the policy would eventually have to be wrapped up hammered stock prices around the world and sent bond interest rates spiking. Already, there have been suggestions to raise interest rates in order to get hold of foreigners’ funds.

So how should Korea react?

“When a crisis emerges from America’s exit strategy,” said Shin Hyun-song, an economics professor of Princeton University, “raising interest rates could only worsen the monetary stringency. For now, the important thing is to focus on liquidity supply preparing for the outflow of investment funds. Korea might also need an additional policy in the bond market.”

The following is excerpts from a conversation between Shin and Sung Tae-yoon, economics professor at Yonsei University. Questions were asked by Sung and answered by Shin.

Q. The recent announcement of Bernanke’s exit strategy is influencing international financial markets. Will the Fed stick to its exit strategy?

A. The Fed must have been embarrassed. I can tell the Fed is taking a step back. Its exit strategy could be adjusted according to the market’s situation.

If the U.S. launches a full-scale measure to absorb liquidity, interest rates on treasury bonds will sharply rise and the weak spots will be exposed. China, financially struggling Europe, and emerging countries like India, Turkey, Brazil, South Africa, Malaysia, Indonesia and the Philippines are especially vulnerable. But this time, the crisis is not going to be contagious. Rather, the severity will be determined by how vulnerable the countries are.

Some say that there is a need to raise interest rates to cope with investments fleeing the country. What do you think?

Not at all. During economic booms, raising interest rates means an inflow of funds but only because investors are willing to take risks. During a crisis, higher interest rates only worsen the soundness of financial institutions, triggering more foreign capital to escape. In a liquidity crisis in which foreign funds are escaping, raising the interest rate leads to falling asset prices and growing debt, which intensifies the financial crunch.

In 1992, on “Black Wednesday” in the U.K. when Germany raised its key interest rate, investments in the U.K. went out to Germany. At the time, the Bank of England also increased its interest rate in order to stop the outflow. But in the end, the action only destroyed the U.K. housing market. What kind of action do you propose for Korea to prepare for an exit strategy?

An exit strategy is inevitable for the U.S. Expanding liquidity in response to a confused market is like trying to put out a fire with oil. It is important for individual countries to take action to stabilize their financial markets beforehand and prevent further crises before a full-scale exit strategy.

Korea needs to reduce shocks coming from quantitative easing. When there is a massive outflow of investment funds, there is the necessity of supplying liquidity. The macroeconomic stability policy will partly ease credit crunches at banks. But it won’t have enough impact on the bond market. Therefore, there might be need for an additional policy in the bond market. As of now, the focus must be on liquidity supply in preparation for outflows.

Some believe the U.S. exit strategy is a signal of economic recovery and will be positive for the Korean economy. Do you think so?

The belief that an exit strategy by the Fed is positive for Korea’s economy is still far from the current situation. Tapering off the U.S. quantitative easing and putting an end to it are a process of normalization, and for Korea, it needs to endure the whole process until it’s over. The possibility of a credit crunch has been reduced over the recent years, but still, there is need to take action carefully to prevent the real economy from shrinking by using measures like liquidity supply.

Along with the U.S. exit strategy, if a Chinese financial crisis materializes, what impact will it have on the Korean economy?

Due to many restrictions in the Chinese banking industry, there are a number of shadow banking organizations operating free of restrictions. Also, there have been a lot of inflows of money into the country to support project financing loans for the exclusive industrial zones and housing market. Now there is a high likelihood of those loans turning sour.

The Chinese way to get rid of those soured loans even at risk of shrinking growth is the right step. Such shadow banking activities didn’t exist before 2008. However, since then, they grew to almost the same size of the legal financial market. Liquidation of bad assets in China will affect the real economy of Korea more than the financial sector. Since Korea mainly exports intermediary goods to China, a Chinese economic recession is way too big to avoid.

What do you think of Abenomics?

There is a big weak point in Abenomics. In order for it to succeed, both expected interest rates and long-term rates must rise, but that leads to aggravation in fiscal soundness. Therefore, the economy must recover before the long-term rates rise. But lifting the economy beforehand is not happening since the interest rates determined by the market can easily spike temporarily at any time.