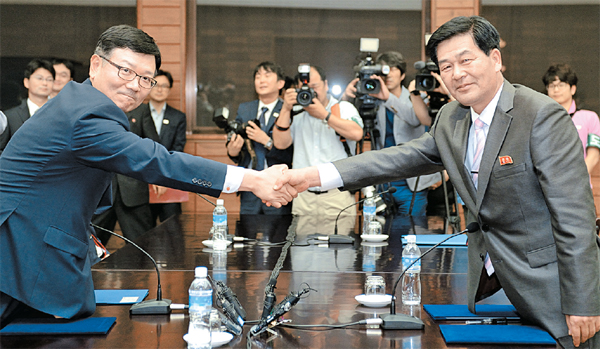 South and North Korea agreed to reopen the Kaesong Industrial Complex and approve the visit of Southern business owners for a maintenance check. The jointly run factory park has been shuttered for nearly three months.

Negotiators from the two Koreas had 16-hour-long, 12-round marathon discussions during the low-level talks held in the Tongil (Unification) Pavilion, on the North’s side of the truce village of Panmunjom, starting Saturday at 10 a.m., and released a joint statement at 4 a.m. yesterday.

In the statement, they agreed “South and North [Korea] will let the companies in the Kaesong complex restart the operation when all preparations are completed.”

In order to arrange some rules to prevent further disruption, the two Koreas will also hold an additional low-level meeting on Wednesday at the Kaesong Industrial Complex.

On the day of the additional talks, they will allow the owners of the 123 South Korean companies based in the complex to enter the complex for a maintenance check on their facilities as operations have been halted since April. The owners will be able to remove their products stuck in the complex and sell them to their business partners in South Korea.

North Korea also pledged to guarantee the safety of South Korean workers or officials who will visit the complex for the resumption and allow communication with the South.

Ensuring the safety of the workers was an important issue for South Korea. When the last remaining seven South Korean officials stayed in the complex for the negotiations with North Korea over “the matter of unpaid wages and taxes,” which was the official reason at the time, they were effectively held “hostage” by the North, a Ministry of Unification official told reporters at a closed-door meeting after they safely returned to the country on May 3.

“First of all, we clearly pointed out that the North’s wrongful measures disrupted the operation at the complex,” Suh Ho, South Korea’s chief negotiator, said at a press meeting after the talks yesterday.

“We reiterated the unilateral decision by North Korea on suspension of the complex was an act of violating the inter-Korean agreements and seriously losing mutual trust between the two Koreas.

“In order to normalize the Kaesong Industrial Complex, we clarified North Korea should show responsibility in regards to the losses of our companies due to its unilateral measures and also should clearly pledge the prevention of further suspension,” he said. “We reaffirmed our position on the constructive normalization of the Kaesong Industrial Complex based on international standards.”

Before the meeting, South Korea said it would call for “constructive normalization” of the complex, which demands North Korea practice responsible manners in inter-Korean business projects.

In April, North Korea unilaterally decided to block all entry of Southern workers and cargo into the complex and pulled out their 53,000 Northern workers, apparently angry over the adoption of new UN Security Council sanctions against the regime that Seoul supported to punish Pyongyang for its February nuclear weapons test.

That led to a halting of operations at the eight-year-old joint-venture park, the last remaining inter-Korean project and symbol of the Sunshine Policy of engagement.

The owners of the 123 companies claim their total loss has been 1.05 trillion won ($919 million), according to Seoul’s Unification Ministry.

When asked how the North Korean negotiators’ attitude was during the talks, Suh said he felt “North Korea was indeed eager to resolve the Kaesong issue” and it was “aware of the current situation of our companies.”

In principle, the two Koreas reached a consensus to resume the operation, but the vague statement “when all preparations are completed” could be a source of conflict.

During the talks, South Korea emphasized the prevention of an additional shutdown, which apparently demanded North Korea promise not to commit such a unilateral act.

But the North focused on restarting operations, according to Suh.

“North Korea placed the immediate restoration of the operation and the maintenance of the facilities as its top priority,” Suh said.

“Additionally, North Korea said they would allow the return of the complete products first, but restricted it to the export of raw materials and other assets.”

In fact, although the joint statement says both sides “shared understanding about the constructive normalization,” the statement didn’t mention the word “prevention” of further shutdown.

Suh also said they didn’t discuss details on how to prevent further suspension of the operation yet.

Given the fact that South Korea has said they couldn’t tolerate the “vicious cycle” of the disruption at Kaesong or other reckless acts by the North in any cross-border business, the South could demand a pledge from Pyongyang not to repeat a unilateral act as a precondition for resuming operations.

For North Korea, they might want to restart the factory park as soon as all technical details are in place.

A senior Blue House official told reporters yesterday that they still need more discussions to educate North Korea about what they describe as “global business standards.”

“We should have more full-scale negotiations in regards to the safety [of South Korean workers] and other issues, after the meeting on Wednesday,” the official said.